(Everly, directed by Joe Lynch and starring Salma Hayek, is currently available on iTunes, Amazon and On Demand, and it will open in theaters on Feb. 27. Limited spoilers below.)

The trailers made us think that Everly was like John Wick but with a female lead. Instead of Keanu Reeves avenging the murder of his puppy and theft of his beautiful car by Theon Greyjoy, Salma Hayek plays a prostitute fearing for her life after her Yakuza boss boyfriend learns of her attempt to turn rat against him. That’s what the trailers wanted us to believe, that Everly is the story of a badass hooker picking off her attackers one-or-ten-at-a-time, chucking grenades into elevators packed with henchmen, all while she hoped to escape with her mother and daughter at the end of the worst evening of her life.

But Everly is so much more than that, and the John Wick comparisons end with the story of one person with a knack for staying alive.

In the beginning, Everly felt a lot like Smokin’ Aces, with the first wave of attackers being half-dressed Yakuza dipshits, followed by a team of violently eager hookers who want the $50,000 price tag on Everly’s head. You expect that this will be the gimmick, wave after wave of cartoon characters with different styles of slaughter, and that is sort of how it plays out. But the most interesting character is this woman, the target, and what Everly never really explains to us is how the titular prostitute (no pun intended, I swear) goes from barely being able to handle a sub-machine gun to murdering a small army with style and flair before blowing the wall of her studio apartment to smithereens with one of the biggest, heaviest guns you’ve ever laid eyes on. Nor does it bother addressing the rather serious wound that she suffers in this opening shootout…

Perhaps she’s merely a survivalist at heart and her desire to escape with her daughter alive to spare her the same fate of being raped and abused at the hands of scumbags, perverts and psychopaths is what allowed her self-healing powers and ability to murder to evolve in a matter of minutes. We don’t have time for such plot holes, because there are so many killers coming through the elevator, doors and windows. This is simply a story about mothers who will defy any odds to protect their daughters.

We learn early on that Everly hasn’t been in her daughter’s life for four years. Instead, Everly’s mother has cared for the girl, and when the terrified hooker suddenly calls, this is less about “What’s wrong?” and more about “Where the hell have you been?” In fact, after strategically sneaking her mom and daughter into the building that is being guarded by Yakuza soldiers – which makes no sense, because JUST RUN, YOU FOOLS! – Everly must first answer for her absence before any more blood is spilled. Suddenly, this is a love story about family and protecting what truly matters to you, and you probably wonder, “Hey, what the hell happened to all of the action and hilariously bloody violence?”

And then The Sadist and The Masochist show up. I won’t spoil the fun by describing this psychotic Kabuki show, and I’m not even sure I could do these characters justice if I tried. 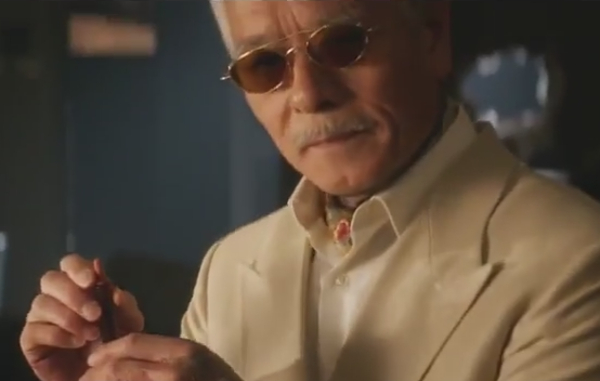 It’s at that point that Everly takes a sharp left turn away from John Wick and becomes a sort of gory mash-up of Not Without My Daughter and The Long Kiss Goodnight, complete with over-the-top torture, killers that just won’t die, a bad guy short on honor and brains, and even the little girl adorably asking, “Mommy?” in the arms of her bruised, beaten, stabbed and shot mother. Except this mash-up is high on PCP and sets out to ask, “How can we make the next death even more ridiculous than the next?” If John Wick was a finely-choreographed ballet of violence, Everly was a mosh pit of hilarious and almost-unwatchable death.

But I’m certainly not saying that like it’s a bad thing.

Grade: 4 out of 5 exploding elevators filled with Yakuza henchmen