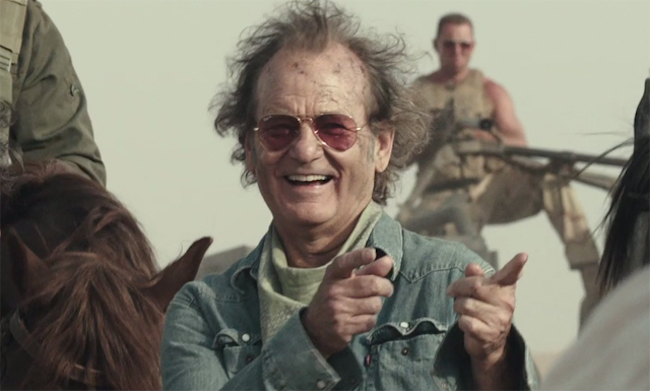 On Monday night, Bill Murray showed up on Jimmy Kimmel’s late-night talk show dressed like… well, this. What followed was the now-predictable chorus of people hyperbolically championing everything Murray does. “Oh, that Bill Murray. He just doesn’t care! Look how freewheeling he is!” To me, the appearance came off as the opposite: It seemed desperate and almost like Murray cared too much. This is the week I officially grew tired of the “Bill Murray can do no wrong and is just such a crazy guy” narrative. I just want Bill Murray to star in a good movie again – because he’s quietly starred in a lot of bad movies recently.

Murray’s new movie, Rock the Kasbah, is getting pummeled by critics. And deservedly so: It’s a mess that Murray seems to think he can save by singing and hamming his way through. There’s a scene in Rock the Kasbah in which Murray sings Deep Purple’s “Smoke on the Water” to an Afghani tribe. This is the kind of scene Murray has skated by on for years now – “Oh, can you believe that crazy Bill Murray sang a song!” — but with Rock the Kasbah, he’s completely exposed and it’s just not “cute” anymore. It’s sad. This movie made me sad. Pretty much all of Murray’s recent non-Wes Anderson films make me sad. (And he’s never really the star of those recent Wes Anderson films anyway; I’m referring to movies in which he’s legitimately the lead.)

Okay, deep breath: I am a fan of Bill Murray’s acting. I really am. My annoyance comes from a place of love and disappointment. Lost in Translation is one of my favorite films and it captures Murray at his absolute best. There, he’s heartfelt, dignified, sad, kind – a real human being. Yes, he sings, but when his Bob Harris sings Roxy Music’s “More Than This,” Murray’s not hamming it up. He’s not trying to save a movie in one scene. He’s understated and the result is haunting, even magical. When Harris makes eye contact with Scarlett Johansson’s Charlotte, there are sooooo many ways for this scene to be played the wrong way. But a deft Murray has the ability to play that moment in a way that conveys he’s looking at a dear new friend who’s helped him rediscover a side of himself that’s been missing. Charlotte means the world to Bob, but not in a romantic way. And he relays all of this with one look as he quietly sings the words “more than this, you know there’s nothing… more than this.”

The Bill Murray of today reminds me of Groundhog Day. Remember when Phil Connors (Murray) has the almost-perfect day? Not the one that gets him out of the day, but the one where he finally wins over Andie MacDowell’s Rita? Remember how that day ended with an impromptu snowball fight with some local children, with the end result being Phil and Rita falling down together in a snowbank? The next day, Phil tries to recreate this day again, but it’s not the same. It feels forced. He even overdoes it with the snowball fight, then forces Rita to the ground, trying to recreate the impromptu fall. This is how I think of Bill Murray now; he’s trying hard to recreate the magic he found with Lost in Translation, but it feels forced and “off.”

Murray legitimately deserved the Oscar for Lost in Translation. And he wanted it so bad. Now, with more than a decade of hindsight, it’s even easier to see that he got a raw deal. Lost in Translation is now a modern classic. Honestly, when’s the last time you said to yourself, “You know, I’m going to watch Mystic River tonight? Sean Penn is just so good.” Baloney, Murray deserved the Oscar.

Since Lost in Translation, here are the movies that Murray has starred in (meaning he was legitimately one of the lead characters): Life Aquatic (a good movie), Broken Flowers (a good movie), Garfield (A Tail of Two Kitties), City of Ember, Get Low, Hyde Park on Hudson, The Monuments Men, St. Vincent (in which he does a terrible accent the whole film), and Rock the Kasbah. (He’s a borderline main character in Moonrise Kingdom, a good movie, and Aloha, a movie a lot of people do not like.)

Bill Murray has quietly made a lot of bad movies since Lost in Translation, and no one has noticed because everyone is so damned enamored of Bill Murray “being Bill Murray.” You are not helping him. You are enabling him. Deep down, Murray still wants that Oscar. He’s never going to get it as long as we think it’s just so great that he shows up on Jimmy Kimmel wearing a costume. This is our fault. The world will be a better place with Bill Murray making good movies again. I want to see him challenge himself again. I want to see another moment like Murray poignantly singing “More Than This.” For the life of me, I cannot watch him sing “Smoke on the Water” again.