The Journalistic Process Is The Hero In The Exceptional, Disturbing ‘Spotlight’ 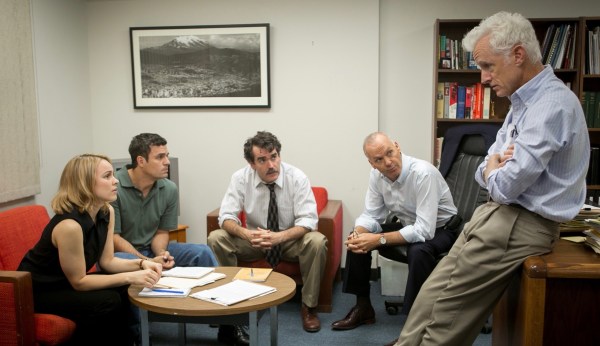 Listen closely to the soundtrack of Spotlight and you’ll frequently hear the sound of church bells. The film, in a characteristic move, never turns up the volume on them. They’re just there, in the background, part of the fabric of everyday life in Boston. They’re much like the churches themselves, which figure into the background of many shots or, for that matter, the Church, whose presence is felt throughout the heavily Catholic city. It operates with an expectation of respect, and an accompanying expectation of privacy, privileges granted by most of Boston’s citizens with the understanding that the Church is, above all, a force for good. But with any privilege comes the potential for abuse, and with an institution like the Catholic Church, the scale alone makes that potential tremendous and diminishes the potential for the abused to make themselves heard.

On January 6, 2002, The Boston Globe ran a story with a simple, but devastating headline: “Church allowed abuse by priest for years.” It was the product of intensive reporting from the paper’s Spotlight team, a division devoted to investigative work and used to training its focus on a story and not looking away until it was done. The Spotlight built the story, and the stories that followed, detail by detail and interview by interview until there could be no disputing its truth. Spotlight, the story behind the story, is a case of content determining form.

Directed by Tom McCarthy (The Visitor, Win Win) and co-written by McCarthy and Josh Singer, it plays like a great piece of longform journalism, following the Spotlight reporters from beginning to end as they follow a trail that goes from years-old, quietly covered-up incidences of abuse all the way up to Boston Archbishop Cardinal Law. If the film, one of the year’s best, has an obvious predecessor, it’s All the President’s Men, Alan J. Pakula’s similarly no-nonsense account of Bob Woodward and Carl Bernstein’s investigation into the Watergate break-in. It compares well to that classic.

A full sense of scope — of the story, of those uncovering it, and the city in which they live — helps immeasurably. It’s an unsure time at the Globe as the film opens. Marty Baron (Liev Schreiber) has just joined as its editor after a stint at the Miami Herald. An out-of-towner — and a Jew — with, gasp, little interest in baseball, he arrives trailed by a history of successful reporting, but also of making cuts, and he carries himself with a straight-to-the-point demeanor that charms no one. But Baron is also quick to pursue stories his predecessors might have avoided, regardless of the cost. In the first reports about John Geoghan, a priest accused of abuse, he sees the ideal assignment for Spotlight.

Led by Walter “Robby” Robertson (Michael Keaton), the reporters pursue the story through various avenues. Sacha Pfeiffer (Rachel McAdams) talks to the victims. Matt Carroll (Brian d’Arcy James) looks into the cover-up. Michael Rezendes (Mark Ruffalo) cultivates a rapport with Mitchell Garabedian (Stanley Tucci), a lawyer representing victims. Throughout the film, they converge, converse, then break off. The film trails behind them as they report, but also as they try to leave the story behind them — a task that grows increasingly hard as the details get filled in. Pfeiffer, for instance, finds it impossible to go to church with her grandmother, knowing what she knows. Carroll finds the story is, literally, closer to home than he imagined. For Rezendes, it serves as a catalyst to his already-combusting home life. Yet, Spotlight mostly lets these personal dramas play out in the background as the bigger story reveals the ingrained habits and systems of complicity that allowed the abuses of Geoghan — and, it’s soon revealed, many others — to go unpunished.

Aided by a fine Howard Shore score and assured photography from Masanobu Takayanagi, McCarthy directs with an unerring sense of restraint and evenhandedness. The film feints at introducing villains and turncoats, then reveals them as just concerned men doing their job. Some of the most moving scenes come from Pfeiffer insisting, however gently, that she needs more details of what happened from the victims she interviews. It’s a film short on dramatic moments and long on slow-building tension. Mark Ruffalo, a stand-out in a stellar cast, gets the biggest speech, but even this is more a product of misdirected frustration than righteous indignation. There’s no easy solution to the problem they uncover, only the slow process of bringing it to light.

Which is in no way to suggest the film doesn’t work as a drama. Like its characters, it just doesn’t take any short cuts. A louder film would be a lesser film. The structure proves ingenious, too: When one dramatic thread plays out, Spotlight picks up another, then the next, and so on. In the end, there’s nothing left to unravel, just the grim truth that was there all along, waiting for someone to find it.