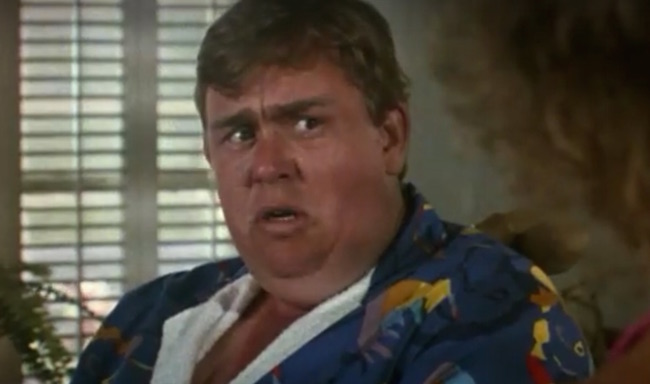 Here’s how you know a movie has fallen out of favor within the zeitgeist of popular culture: The lack of multiple Internet 30th anniversary pieces. For some reason, “30” seems to be the big one. We also see “25,” “20,” “10” and, heaven help us, sometimes even “fifth anniversary” retrospectives. (This week marks the fifth anniversaries of The Expendables, Eat Pray Love, and Scott Pilgrim vs. the World, so plan accordingly.) And this trend has been so profound, we now see the same movies being recycled every five years. This year, I was asked to write an anniversary piece on a movie that I had written an anniversary piece on five years ago. It’s at this point you start thinking, Perhaps I’ve been doing this too long.

Summer Rental lands in that strange spot of being a movie that people (A) remember, (B) like, (C) has a beloved star and a beloved director, yet (D) no one talks about anymore. If you think about it long enough, most of the movies that we talk about should be in this category. It makes sense that we talk about Vertigo or Star Wars, but it doesn’t make much sense that we still talk about The Goonies. If we live in a world in which The Goonies is still a topic of conversation, Summer Rental should, conceivably, also be something we write about.

Summer Rental stars John Candy as Jack Chester, which is the perfect character name for someone played by John Candy. Directed by Carl Reiner, it has a similar vibe to National Lampoon’s Vacation, only with a slightly more family-friendly tone. Jack Chester (boy, that really is a perfect name) is an air traffic controller in need of a vacation after almost causing a mid-air collision when he mistook a fly on his screen for an incoming aircraft. (Is there any profession that movies make look worse that being an air traffic controller? Growing up, when I was asked what I wanted to be when I grew up, air traffic controller ranked somewhere in between prison inmate and lava taster.) So, Jack Chester (best) takes the family – his wife, Sandy (Karen Austin), and three kids, Jennifer (Kerri Green; yes, from The Goonies), Bobby (Joey Lawrence, “whoa”) and Laurie (Aubrey Jene) – to Florida. While they are there, things go wrong with the place they rented and blah, blah, blah Jack Chester winds up winning a local regatta… as these things tend to happen.

While trying to figure out why Summer Rental somehow lost its place in culture, I made the mistake of thinking it was one of those movies that didn’t do well at the box office, but found a later life on cable. But this isn’t really the case: Summer Rental finished second in its debut weekend, only behind the still-mammoth Back to the Future. And it finished first against the other three movies opening that weekend, Pee-wee’s Big Adventure, Real Genius, and My Science Project — going on to gross a respectable $25 million domestically. (Both Pee-wee’s Big Adventure and Real Genius have a much larger footprint in 2015 culture than Summer Rental.)

And after a string of memorable supporting roles (Vacation, Splash, Stripes), Summer Rental was the first time Candy was given a movie of his own. Again, the movie preformed well, but Candy, kind of surprisingly, never got a lot of movies that were essentially his vehicle. Yes, there’s the much more popular Uncle Buck (and the much less popular Who’s Harry Crumb?), but most of Candy’s memorable performances would come from sharing the screen in movies like Planes, Trains and Automobiles and Spaceballs.

Summer Rental may very well rank at the top of the “pleasant random cable find” list, a funny enough movie that there’s no way anyone has seen too many times. It also ranks near the top of “movie no one talks about, but everyone remembers and seems to mostly like.” Maybe that’s the film’s legacy? (There are other movies that qualify: When’s the last time anyone has mentioned, say, Down and Out in Beverly Hills? – a movie that was the 11th-highest grossing movie of 1986.) And I realize that by writing an “It’s interesting there wasn’t a deluge of anniversary pieces about Summer Rental,” I’ve written about the anniversary of Summer Rental. Regardless, it’s interesting to note what “sticks.” A lot of bad movies “stick.”

For whatever reason, Summer Rental is just a 30-year-old movie that people like, starring a comedian that we all miss who has been gone now for 21 years. Maybe it’s better this way.