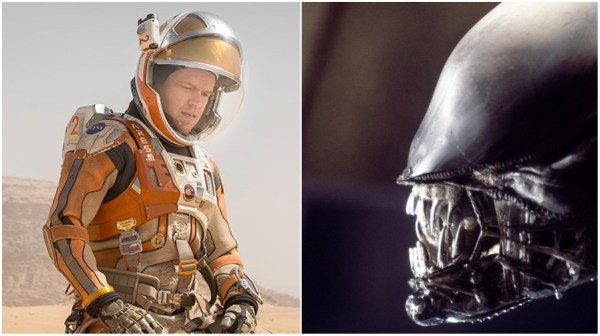 “In space, no one can hear you scream,” read the posters to Ridley Scott’s 1979 film Alien. But one of the most famous taglines in film history isn’t just an evocative phrase: It’s good physics. Part of what makes Alien such an effective horror film is the lengths it goes to make the experience of traveling through space feel real, and really dangerous, even without a hungry Xenomorph stowing away. Alien‘s characters seem perpetually on the verge of exhaustion, thanks to the everyday business of staying alive.

Scott’s latest film, The Martian, has no aliens, hostile or otherwise. Unlike Alien, which is set centuries in the future, The Martian seems to be taking place just a few years ahead of our own time, when technology — and, presumably, an increase in government funding — has allowed for a trip to Mars. Yet the worlds of the films aren’t that far apart. The crew of the Nostromo would see in Martian protagonist Mark Watney (Matt Damon), a kindred spirit, a fellow struggler against a universe whose elemental forces doesn’t want him to live. (Or they would if they hadn’t been gobbled up by an alien.) An adaptation of Andy Weir’s surprise hit novel — with a screenplay by Drew Goddard (whom we interviewed earlier this week) — Scott’s film is, like its source material, a tale of survival that plays by the rules of physics. If Watney can’t use math and science to save himself, he won’t be saved.

The Martian opens with a storm sequence, that could almost pass as a red-tinted version of the conditions the Nostromo crew experiences, when landing on the planet housing the derelict spaceship sending out a distress signal. Traversing it requires considerable preparation; surviving it is anything but a given. Space exploration requires creating an environment in which humans can live and breathe and, just as importantly, shutting out everything that might wreck that environment. When crew members return with an unconscious, and implanted, Kane (John Hurt), Ripley (Sigourney Weaver) refuses to let them in, citing the need to follow quarantine protocols. She’s undermined by Ash (Ian Holm). It’s bad scientific practice, and it seals their fate.

Yet part of the beauty of Alien comes from the way science plays no favorites. The Xenomorph is a pitiless beast hardwired to reproduce at the expense of every living creature around, “a perfect organism,” in Ash’s words. But it’s also a true monster from the id, the product of the imagination of Swiss surrealist H.R. Giger, who combined images from nightmares and erotic daydreams with reckless abandon. It looks like an oozing phallus and has claws seemingly made to pluck out eyeballs. It looks, in other words, like it crawled out of hell. Yet, in the film’s final scene, it’s physics that does in what looks like a monster from realms beyond human comprehension. Ripley pushes a button and blows it out of the airlock. It dies, screaming, in the silence of space, just as any other living thing else would.

Without giving too much away, there’s a neat, if purely coincidental parallel to that airlock scene in The Martian, one that drives home how much the two films have in common — and how little they share with Prometheus, a sort-of prequel to Alien released in 2012. Where Alien and The Martian both have their roots in hard sci-fi (a phrase now impossible to write without hearing it in the voice of Martin Starr’s Party Down character), Prometheus is a different sort of beast, a mythic, image-driven fantasy of space and fear. Where Alien has its roots in back issues of Omni, Prometheus plays like it was taken from half-remembered stories published in Heavy Metal and imagery found on ’70s custom vans.

What’s more, its scientists behave nothing like scientists. Where the crew of the Nostromo approaches every task with great — if ultimately not great enough — caution, the Prometheus team treats their first encounter with alien life like toddlers at a petting zoo. Where Alien concerns everyday people going about the tedious, perilous business of traveling through space, Prometheus puts a series of Big Questions front and center: Where did we come from? Where are we going? Can death be defeated? What’s the deal with Michael Fassbender’s hair?

This alone doesn’t make it a bad movie. Nor does its more or less complete abandonment of actual science. Science-fiction filmmaking would be much less rich if every movie needed to pass Neil deGrasse Tyson’s seal of approval. That it tells its story so awkwardly threatens to push it into bad movie territory. (My own take: Prometheus doesn’t work, but it’s the kind of fascinating failure I’ll end up re-watching more often than I return to good movies. See also: Alien 3.) But it’s easy to suspect some of the disappointment that greeted Prometheus came from how different it was from Alien. Never mind the way it kept teasing connections to Alien without enriching the original film. It ended up seeming like it belonged to a different universe than Alien, the film-equivalent of a song remixed beyond the point of recognition.

Maybe ultimately Scott is better suited to explore a different sort of outer space than the one in Prometheus, one grounded in how space actually works. And as different as the two films are, they’re united by a respect for science, and a respect for those who understand its unbending roles. In a world controlled by science, it’s those who learn to master it who will survive, whether their enemy comes in the form of a dripping creature with razor-sharp teeth, or a planet on which humans were never meant to live.