Anderson Silva Thinks The Judges Screwed Him Over At UFC London, But Is He Right?

Judges have a difficult job translating the intricacies of an MMA fight into a 10-9 must system. The rules we have in place now were brought over from boxing, and frankly, seem to be open to interpretation from one judge to the next. This seems to have led to a Michael Bisping decision win over Anderson Silva at UFC Fight Night 84 in London, after which Anderson Silva went on a post-fight rant:

“Here’s the deal, you can’t win one way, they try to take it away the other way. That’s it. You saw how that went, right? So, there’s nothing left to say. I fought for you, and that’s it. Thank you for the support. My family, I’m coming back home, I’m fine. Mission accomplished, mission given, but sometimes it’s like in Brazil, total corruption.”

Brazilian judges have long been considered biased in favor of their hometown fighters, but British judges (to my knowledge) haven’t had many issues in recent years, and this decision doesn’t seem to be a sign of corruption. It does, however, bring up the faults in MMA’s current judging system. 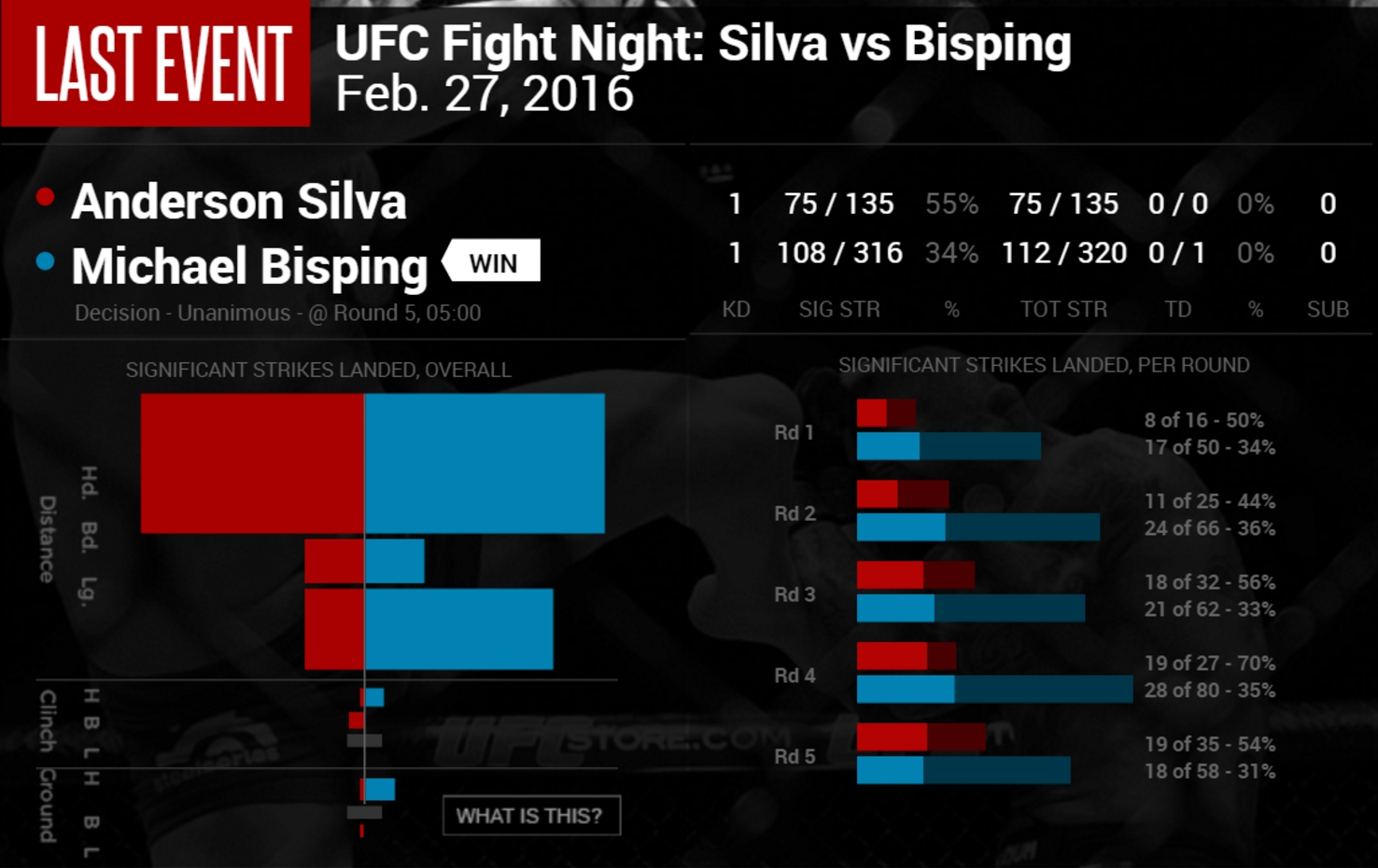 As you can see, Bisping landed 28-80 strikes and was active in throwing strikes (that mostly missed) at Silva. But this brings up the Diego Sanchez argument: if a fighter is gritty and moving forward by staying active (read: missing a lot of their shots) then are they winning a fight? If you were to place two random people in a vacuum and had them fight, who would be the winner if it played out like Bisping/Silva? Did the fact that the fight took place in London have something to do with the decision?

This is the criteria judges are looking for in order to win a fight in the Octagon:

Bisping had the aggressiveness to take round 4, if that was the only thing we judged it on. But didn’t Anderson show superior defense?

Did Anderson not dictate the pace, location and position of the bout by standing in the corners and doing his crazy Bruce Lee/panantukan boxing? It may not have done him any favors, but does that not count? Wasn’t Bisping following his lead for the vast majority of the fight? Some may say Bisping was chasing Anderson, but Anderson was simply making the fight take place where he wanted it to – with his back against the cage in a neutral corner…

The following objective scoring criteria shall be utilized by the judges when scoring a round:

This is a big question here – is the end of round 3 a 10-8 considering Bisping was effectively crumpled by Anderson? And considering he was sitting on the mat, crumpled for about 30 seconds, wouldn’t that be considered a reason to call the fight?

To be fair, his corner wasn’t allowed into the cage, but this should be addressed.

If we can’t judge Bisping’s wobbliness in round 4 due to the damage being done in round 3, thus giving Bisping round 4, then isn’t round 3 a 10-8 considering the context of what happened within that round?

The mass confusion after this also led to Bisping getting nearly 90 seconds to recover between the rounds and no cutman support. Should Michael Bisping have kept fighting after getting dropped by a knee? Should he been cleared to fight if he can’t be attended to? The doctor must’ve cleared him, despite him looking out on his feet. But that’s when Anderson’s claims of corruption echoes.

What we saw in London was a sh*t show. But Anderson Silva seems to have a way to make everything he’s involved in confusing as hell.