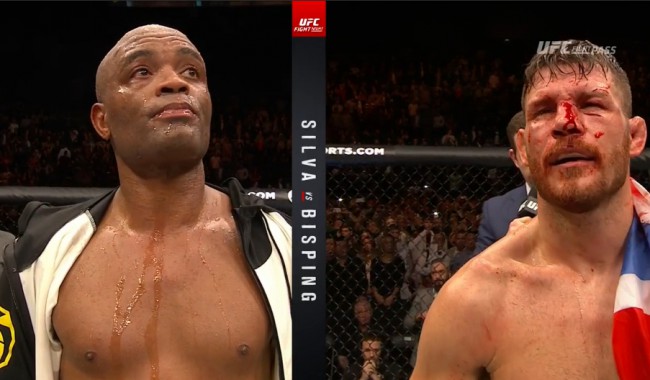 London just hosted one of the strangest fights in modern UFC history with Anderson Silva losing a unanimous decision to Michael Bisping, whom he essentially knocked out in the third round.

Silva is known as someone who clowns in the cage, and he clowned for perhaps 20 out of 25 minutes in this fight, and that clowning cost him a unanimous decision against Bisping. Yes, the above busted face beat Silva, arguably one of the top three greatest fighters in the history of MMA.

You have to admire how Bisping pushed forward constantly, focusing on Silva and not the wing chun head games that the Spider would be dancing with for the vast majority of the fight.

This fight brings up the question of Octagon control — what is it? When Bisping moved forward, biting down on his mouthpiece he threw strikes and controlled the fight. But after the second round, Silva slipped Bisping’s punches, deflected the majority of the Brit’s offense, and countered constantly.

Then there was this knee at the end of the third that looks like it finished Bisping, and yet the fight went on, with Silva dominating, dancing, putting his back against the cage with his hands down and no f*cks given. It was strange, it was Anderson Silva.

Perhaps if he were younger, and his chin didn’t give out to him in the first or second, he would’ve taken this fight hands down.

Where do the Spider and the Count go from here? I’d like to see Anderson at 170, taking on Conor McGregor. F*ck it.