1. Julie Ann Emery, who plays Betsy Kettleman, was on the Better Call Saul Insider podcast this week, and she was just lovely as hell. She talked at length about what she and Jeremy Shamos (who plays Craig Kettleman) put into their roles. Before they began shooting, they didn’t have a lot to go on in the pilot script, so they spent a lot of time hanging out together — getting coffee, going to Trader Joe’s — and acting like they were the Kettlemans. They also sent each other a lot of videos about people who may not be on the inside what they appear to be on the outside as research. One of those videos was the Mitt, the documentary about Mitt Romney and his family, which is to say, Craig and Betsy Kettleman are at least vaguely inspired by Mitt Romney! (via Better Call Saul Insider)

2. On Craig and Betsy Kettleman, Vince Gilligan and Peter Gould noted that they weren’t really supposed to be in the show beyond the pilot episode, but they loved them so much during their auditions that they basically created a storyline to keep them around. They are the Jesse Pinkman of Better Call Saul. (via Better Call Saul Insider)

Julia Ann Emery: [Can you imagine Marie and Betsy Kettleman together?] “They’d be shoplifting at Prada and selling it out of the back of the car.”

Peter Gould: “They live in the same world. Anything is possible.”

Gilligan: “Marie would do the shop lifting, and Betsy would say, ‘I think that sales assistant saw you. I think we’ll have to murder them.'”

I love that idea so, so much. (via Better Call Saul Insider)

4. The Loyola bathroom guy in Better Call Saul helped out with the magnet on Breaking Bad, and they are the same character, according to Gilligan. (via Better Call Saul Insider, image from Reddit user hajisquickvanish)

“Criminals have no recourse.” – Jimmy Where have we heard that before… #BetterCallSaul pic.twitter.com/eoESvwR62V

That line comes from episode 2, when Nacho says to Saul about robbing the Kettlemans: “I like to rob criminals…they have no recourse to the law.”

6. There was a lot of love for Gennifer Hutchison, who wrote the episode, and who is the only female writer on Better Call Saul (she also wrote Hank’s blog on Breaking Bad, and it was so spot-on, it freaked out her own father). (via Better Call Saul Insider)

Dear @GennHutchison, You are bad a** and brilliant. I will come sweep the floors on any set where you are writing. #BetterCallSaul

For folks who liked tonight's @BetterCallSaul Ep. @GennHutchison wrote it, Larysa Kondracki directed. Honored to be part of such #GirlPower

7. Here’s another example of how much detail they put into every little thing on this show: A ton of work went into the Wanted Poster wall, alone. They talked, at length, about how they wanted to shoot it, and they worked to ensure that the faces on the Wanted posters were around the same size as Jimmy’s when it panned down. (via Better Call Saul Insider) 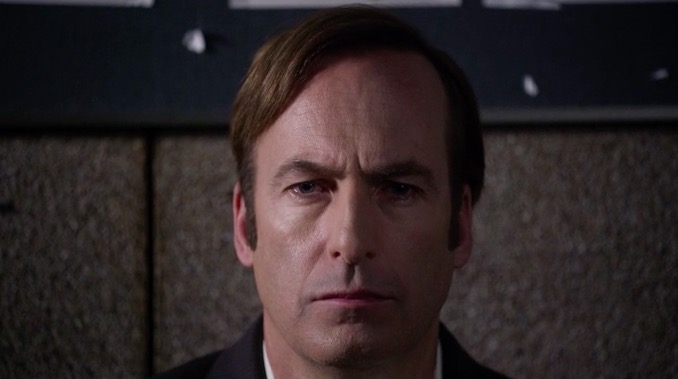 Those weren’t stock photos, either. They brought in a lot of people, put them through hair and makeup and completely transformed them for the photos.

8. The inspiration for character names comes from sweet sources. For instance, Detective Sanders (Barry Shabaka Henley) is named after Vince Gilligan’s art teacher. Plus, this:

Fun fact: Irene the bingo lady is named after my lovely grandmother. She only has one cat, though. #BetterCallSaul

9. The shoe box that Jimmy hid the money in is the same shoe box that “Gene” (Jimmy’s alter ego in Omaha) used many, many years later. (via StorySync)