In a Game of Thrones episode packed with mythology, including hints at Jon Snow’s Targaryen ties, one of the most history-packed (and, if you’re only a casual watcher, most confusing) moments happened in Winterfell. Arya was doing her Arya thing — no, not parkour, but stalking in the shadows — when she saw Littlefinger doing his Littlefinger thing: something mysterious. And weird. And possibly treasonous. She wasn’t wrong: he is up to no good.

And he pulled one over on her.

While snooping around Littlefinger’s bedroom (the most disgusting place in Westeros), Arya finds a scroll that has something to do with Lady Stark. It was only on-screen for a second, but it held massive significance, and harkens back to season one, when Cersei forced Sansa to write a letter to her brother Robb. 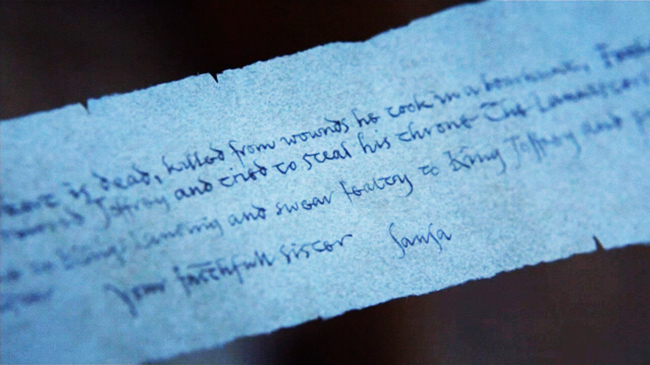 And here’s what it says.

Robb, I write to you with a heavy heart. Our good king Robert is dead, killed from wounds he took in a boar hunt. Father has been charged with treason. He conspired with Robert’s brothers against my beloved Joffrey and tried to steal his throne. The Lannisters are treating me very well and provide me with every comfort. I beg you: come to King’s Landing, swear fealty to King Joffrey and prevent any strife between the great houses of Lannister and Stark.

Sansa is already having problems with the other Northern lords — now Littlefinger is trying to drive a wedge between her and Arya. Being the Lady of Winterfell isn’t all that it’s cracked up to be.