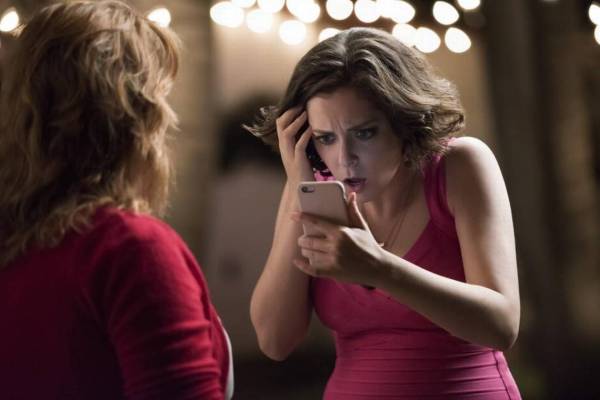 Last night, while watching the premiere of The CW’s new musical-comedy series Crazy Ex-Girlfriend, something strange happened. Every single time I typed the title of the show in my notes, I’d tack a “my” onto the front of it. At the time, I barely noticed (typing, watching TV, and drinking Yellowtail at the same time is hard, y’all), but later, reading interviews with the show’s writer and star Rachel Bloom, I realized my mistake—and what it meant that I’d mindlessly added that “my.”

The entire ethos of the show is right there in its title. My Crazy Ex-Girlfriend would likely be a show about a dude, resplendent in Vineyard Vines, complaining to his bros over beers about his “psychotic” ex, who’d do things like call him several times in a row (!!) and show up at his door in a low-cut nightie, mascara running down her face in clumpy rivulets. But Crazy Ex-Girlfriend is an upending of that particular stereotype, told, quite notably, from the female perspective. This is the crazy ex-girlfriend as we’ve rarely seen—or heard—before: As a human being, telling her own side of the story.

Bloom explained it to Vulture as follows:

“The show is always from the perspective of, here are the times I’ve felt crazy. I’ve felt out of control in my own mind, and kind of laughing at myself. And then people started to call the show My Crazy Ex-Girlfriend, and I’m like no, no, no, that’s not the show. This is not a man saying, oh my crazy bitch ex, she’s so fucking crazy. It was only with that little addition of ‘my’ I was like, oh shit there’s this whole other world where men label women crazy when they’re not being crazy. And that’s not what this is at all…She’s not an SNL character; this isn’t written from a male perspective. We want to welcome women in.”

And it’s true: As a woman, I’ve rarely felt more welcomed—or totally fucking delighted—by a pilot. Crazy Ex-Girlfriend, created by Bloom and Aline Brosh McKenna (The Devil Wears Prada, 27 Dresses) for Showtime before the network passed and The CW swooped in, is at once a bizarre, twisted send-up of the rom-com; a loving swipe at the earnest universe of musical theater; and a darkly hilarious, pointedly feminist take on the conflicting cultural tropes that women have been force-fed since the beginning of time.

CEG follows Bloom as Rebecca Bunch, who, when we first encounter her, is a chatty, high-octane teenage theater kid with a visible retainer and equally visible mania lurking just beneath the surface. It’s summer 2005, theater camp’s ending, and Rebecca’s trying to “talk schedules” with her boyfriend, Josh Chan (Vincent Rodriguez III), so that the two might continue their romance outside of the confines of the summer stage. Instead, Josh dumps her, explaining that she’s “really dramatic and weird.” He’s not wrong.

The next time we see her, Rebecca’s a decidedly less weird and dramatic adult, at least on the surface. She’s miserable, too, having abandoned her musical-theater dreams so that she might make junior partner at a New York law firm. When she’s not popping anti-anxiety pills in the alley outside her office, she’s being haunted by an omnipresent ad for butter that reads, “When was the last time you were truly happy?” The question’s answered for her when she bumps into Josh on the street, who’s aged well and who lightly flirts with her. Mere minutes later, Rebecca is pulling a Felicity, quitting her $500,000-a-year job, packing up her entire life, and moving to West Covina, a nondescript California suburb “two hours from the beach, four in traffic.” It’s just a coincidence, of course, that Josh happens to live there, too.

From there, both the show and Rebecca go totally off the rails; it’s an honor to be along for the batshit ride. The opening song, for instance, is a brilliant, euphoric number about the “wonders” of West Covina (“see the sparkle of the concrete ground!”) in which Rebecca tries to convince herself—and groups of strangers—that she didn’t move to the Applebee’s-studded city to rekindle the flames with her itinerant teenage boyfriend. “And also, by coincidence, Josh just happens to be heeeere,” she trills while marveling at West Covina’s giant pretzels, “cool-looking anime wigs,” and the ankle tattoos of a local stripper named Destiny. “Yes, I heard of West Covina from Josh, but I didn’t move here because of Josh,” she sings into the face of a man helping her move into her bleak, soulless apartment. “Do you get those things are different?”

Brosh McKenna and Bloom — who rose to Internet fame a few years ago with a wonderfully weird YouTube video called “Fuck Me, Ray Bradbury” and has since made dozens of viral videos and written for Robot Chicken — maintain this singularly funny, unabashedly off-kilter tone for the duration of the pilot, interspersing scenes of Rebecca tearing apart West Covina to find Josh with shrewdly witty (and ridiculously catchy) musical numbers. The standout is the “Sexy Getting Ready Song,” which sees Rebecca prepping for a date with sweet local bartender Greg (Santino Fontana) by alternately plucking and ripping hair from her body and attempting a fluid body roll in a pair of Spanx. A mid-song rap interlude stops short when the rapper sees Rebecca’s cosmetics and depilatory creams splayed out across her bathroom sink, and realizes what women have to do to adhere to Western beauty standards. “This is horrifying,” he says. “Like, some nasty-ass patriarchal bullshit. I gotta go apologize to some bitches. I’m forever changed by what I’ve just seen.”

The feminist overtones don’t end there. Rebecca is quite clearly headed for a nervous breakdown, if not already in the midst of it, but it’s equally clear that Josh is merely a cipher for her psychological troubles, a lark she’s following to distract from the real issues at hand. The blame for Rebecca’s crumbling sanity lies, in part, with her mother—who we hear only in VO, reminding that her suicide attempt in law school was a massive inconvenience (“You didn’t even break the skin”)—and with Western society as a whole, which places impossible and often oxymoronic expectations on women. Bloom put it this way in an interview with Time:

“Aline and I were writing this from such a feminist perspective. We’re taught to be strong women, we want to be strong women, but both our western ideas of romance and also our own emotions make us crazy. Women are fed all of these contradictory ideas about what love is and what you should and shouldn’t have and you’re supposed to have it all, but you’re also supposed to fall in love.”

Appropriately, the show’s central love story doesn’t appear to be between Rebecca and Josh. The most profound connection thus far is the one between Rebecca and her coworker, Paula (Donna Lynne Champlin). The two get off on the wrong foot when Rebecca mistakes the longtime paralegal for her assistant, but later bond over a mutual, wild-eyed desire to see Rebecca run off into the sunset with Josh. It helps that Paula’s a little crazy, too—maddeningly curious as to why a Harvard and Yale grad with a cushy New York job would relocate to West Covina, Paula spends much of the first episode painstakingly tracking Rebecca’s social-media activity (which, of course, consists of painstakingly tracking Josh’s). Paula’s also gifted with one of the pilot’s best lines: “If we play this right, one day it’s gonna hit him like a bag of nails to the balls,” she enthuses to Rebecca, who’s dejected because Josh hasn’t yet replied to a near-incoherent text message she sent him upon arriving in his hometown. “And that day, he will text.”

In fact, part of the joke inherent in the show’s tongue-in-cheek, stereotype-dismantling title is that nearly all of the characters on Crazy Ex-Girlfriend are unhinged and in need of some serious help. Rebecca’s new boss Darryl (Pete Gardner) weeps about his divorce on her first day, asking her to be his divorce lawyer because his soon-to-be-ex-wife has hired “one of those real smart Jewish guys.” It’s a risky joke, but it lands when Rebecca explains that she, too, is Jewish, and lightly reprimands him for the subsequent “compliment” about her “button nose”: “Let’s circle back about the Jew thing, because that’s a conversation that we need to have.” Rebecca may be one Fiesta Chicken Chopped Salad short of an Applebee’s lunch combo, but she’s also smart and, at times, self-assured enough to demand respect from her peers and, by proxy, the show’s audience.

These weightier (but still profoundly witty) moments lift CEG out of the realm of straight network comedy and into the stratosphere of sharp satire. This is a show that knows itself already, that’s unlike anything else on TV right now in terms of its subject matter, structure, and shameless confidence. CEG is unafraid to be simultaneously whimsical, sociopolitically savvy, and weird as hell — it’s just as comfortable criticizing the patriarchy as it is paying cartoonish homage to South Pacific. On paper, this all might sound a little, well, crazy. But maybe we’re the crazy ones for waiting this long to give Rachel Bloom a platform for her mad genius.