Seven Ways ‘The Walking Dead’ Has Learned From Its Mistakes

Entering its sixth season this Sunday, it’s safe to say that The Walking Dead has never been as good as it is now. Many dramas get better over the course of their first few seasons, but few have continued to improve this deep into their existence. The Walking Dead was once an occasionally entertaining television series that had the novelty of being the only show around with zombies on it. Now The Walking Dead is a legitimate drama that just happens to have zombies — which are no longer the major draw of the series. We tune in now for the characters and story. The zombies are gravy.

The Walking Dead was not always as good as it is now. Ask a handful of people who watched the first two seasons and at least one will tell you they stopped watching after the second (at least, briefly). Many viewers were poised to bail after the slog on Hershel’s farm. The pilot episode was tremendous, but it took another season and a half for the series to start to find its legs and become what it is today.

Part of what’s made the series great is the ways it’s course-corrected. It’s listened to feedback from the audience without allowing the audience to dictate the series’ direction. The Walking Dead has learned from its mistakes, which is why it’s been able to improve with each passing season.

Here are seven problems the series has overcome during its run. 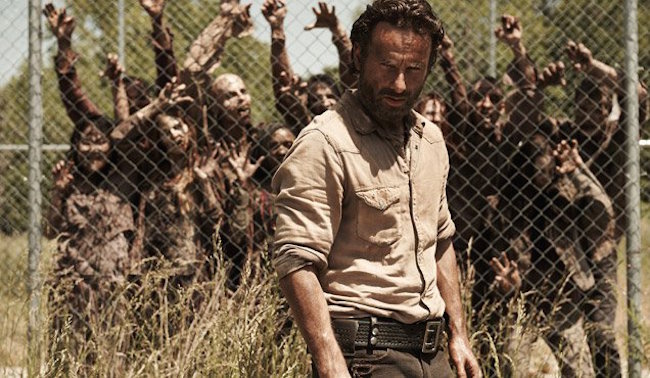 A frequent complaint expressed by viewers in the first two seasons, when the show was under the guidance of Frank Darabont, concerned a shortage of zombies. Especially during the farm season, the show would go an episode or two and only show a handful of zombies, if that. Early on, that’s what we tuned in to see. Darabont, however, chose to keep the character development separate from the zombies, instead offering long walks in the woods, extended monologues, conversations over campfires, and arguments over supply runs. The series eventually realized that we learned more about the characters by watching them contend with dangerous situations than we did watching them deliver somber monologues into a mirror. Remember when Shane (Jon Bernthal) threw Otis (Pruitt Taylor Vince) to the walkers to save himself? That told us as much about Shane as anything had up until that point.

In the Glen Mazzara era and now under Scott Gimple’s supervision, the zombies are more plentiful than ever, but now they feel like extras, background characters to the human drama unfolding at the fore. We are never, however, starved for more zombies.

Through no fault of the actress who played her, Sarah Wayne Callies, Lori Grimes was the most unlikable character on the series through the first two seasons. She was probably going to die anyway, because the comics dictated it, but, to the credit of Robert Kirkman and co., they didn’t hesitate to kill off an unpopular character. However, as soon as Lori died, Andrea — a previously popular figure who was character assassinated by the show itself — sprung up in her place, and the audience simply transferred their dislike from Lori to Andrea.

For a while, some thought an unlikable character was necessary so that the group would have a place to focus the conflict. This proved incorrect. Kirkman had Andrea killed off at the end of the fourth season, even though her character continues to live on in the comics.

With the exception of Father Gabriel, all the main cast members on The Walking Dead are likable now (even Coral!), and any of their deaths would come as heartbreaking. That’s helped increase tension within the series. Characters have to die in this universe, but there are no longer any characters we want to see die. Even the deaths of characters like Tyreese (Chad Coleman), who was only around for a couple of seasons, or Noah (Tyler James Williams) — who was only around for one — feel devastating. There’s a real sense of loss because we care about all the characters.

On the other hand, unlike in the comics, the television series decided to keep Lori’s baby, Judith, alive. The decision seemed like a poor choice at first, because it meant the show would essentially have to carry around dead weight. However, Judith has since played into the plot on a few of occasions. In a few key scenes, Judith has brought out the personality in other characters, most memorably, the bond Tyreese and Beth (Emily Kinney) developed with the baby, and Michonne’s (Danai Gurira) heartbreaking interactions with Lil Ass Kicker. (She also has a humanizing role in the sixth season premiere.)

The Walking Dead used to attract considerable criticism of its apparent tokenism. The series only carried one African-American character for the first few seasons, T-Dog (IronE Singleton), and he was given only a few lines before the showrunners decided to kill him off instead of Carol. After T-Dog, the show introduced, then killed off, a series of other black characters.

The Walking Dead series hasn’t stopped killing off black characters, but the cast is so diverse now that it’s practically unavoidable. By the fifth season, before the series shifted to Alexandria, there were only five white male characters remaining in the main cast, which meant that if a main character was going to die, there was a two-thirds chance it wouldn’t be a white male.

After years of watching the other AMC series, like Breaking Bad and Mad Men, get all the attention for Easter eggs, clever foreshadowing, and fun allusions, The Walking Dead finally got into the game itself, dropping the occasional reference, foreshadowing future threats (the Wolves!), and even layering in callbacks and Easter eggs. For the hardcore fans of The Walking Dead, these provided reasons to watch each episode again to see what they may have missed the first time around. Moreover, The Walking Dead fan theories — which barely existed three years ago — are abundant now and they are fun, including one that uses apparent Easter eggs to suggest Breaking Bad is a prequel to The Walking Dead.

6. The Show Found Its Sense Of Humor

The first several seasons of The Walking Dead were bleak. Tellingly, when the series brought back Merle (Michael Rooker) — a despicable racist — he quickly became a fan favorite because he at least brought a sense of humor to the series (even if it was a bad sense of humor). The series has continued in that vein, sprinkling in the occasional joke (now often at the expense of Eugene’s hair), and we’ll see even more of that in the sixth season premiere, the funniest episode of the series, so far. A good sense of humor goes a long way toward making a character more likable and making us care for them.

7. The Series Stopped Being Afraid To Chew Through Plot

Under Darabont, it often felt like each episode of The Walking Dead was one page in the comic stretched into 42 minutes. The show seemed reluctant to push things ahead, perhaps out of a fear of overcoming Robert Kirkman’s source material. With The Governor, the series even circled back around and repeated itself, essentially adding another half-season to his arc to keep the series from moving ahead too quickly.

The series now operates at a much quicker pace, and Kirkman and Gimple seem to trust themselves more to create story arcs outside of the comics and blend them into the overarching story to avoid catching up to the comics too quickly. The series could have stretched Gareth and the cannibals out for a half-season or more, but Gimple wisely chose to contain that storyline to give it a greater impact.

Now Watch: The Best Characters From ‘The Walking Dead’ That We Haven’t Seen Yet