NBA Summer Vacation Watch: Summer Is Back, Summer Is Forever

Hello, sun seekers, and welcome back to NBA Summer Vacation Watch! It’s been too long. While this brief and beautiful respite is always the high-point of the NBA cycle, we’ve never needed SVW more than right now, as we find ourselves in such an uncertain, gloom and doom time.

And if you are a new beach freak, then allow me to welcome you to your ultimate all-inclusive! NBA SVW is concerned, above all else, with delivering the summer vacation destinations of some of your favorite and tallest people in the world, in the very short window they have to literally and figuratively dip their toes in tropical waters, walk on the beach, go fishing a lot, and drink the wine they make and the tequila they brand-partner with in (relative) abandon. This is a positive space, and vacations are, as always, rated completely arbitrarily but to the highest degree of discernment based on my years of expertise on this simultaneous carefree and stringently serious beat.

So please, new and returning guests, crack a cold bev of your choice and sit back, relax, and scroll through these vacations.

Starting strong here because there is no other way to do it. Here we have Serge Ibaka — aka Ma Fuzzy Man, aka Mr. Avec Classe, aka Original Thirst Trap Man — doing what we love to see in summer by staying hydrated while staying partially submerged in a pool. Can you multi-task any better than this when the weather gets hot and your only uniform requirement for the day becomes a bucket hat and, I want to say, two tight pairs of shorts? No, you can’t. Weaker men have tried and failed horribly.

Rating: May Serge use that new Ballmer money to install a water feature in his pool, amen.

Western Conference champion Deandre Ayton returned home to the Bahamas just in time for his birthday and a beautiful parade in his honor. He didn’t stay suuuper long, because as we all know the relentless grind comes for everything, even summer vacation, but please just take in how wide a smile he had while he was delivered the homecoming of a champ. That’s the kind of thing you keep with you long after you’ve come home and unpacked, like sand you later find in your suitcase.

Rating: Let’s get some IG developers on here so we can ban people from commenting things like “Bro if you develop a shot from the 3 you will be so cold” on a person’s vacation photos.

Previous readers of this esteemed column will know that Buddy Hield is a regular as much as he has vacation in his blood, not just being from the Bahamas but also because pictures of him “working out” on the beach have made it into past SVWs, because he somehow makes maximum exertion look easy and carefree. But here we have a rare glimpse into Hield at play on vacation in Turks and Caicos, paddle boarding around some ancient shipwrecks, casually climbing up and jumping off those wrecks into the sea, then reclining on said paddle board.

Dude, I can’t tell you how happy I am for Kyle Lowry, who rode around for a while this summer on the front of a boat in the Strait of Gibraltar, after chilling in Spain, before signing a contract to match the circumference of his great rear assets that will take him to a place he can golf and ride on boats to his heart’s content, while remaining a pest on an All-NBA Pest team. But this is about summer, so, KLOE, even the whims of the sea.

Turner took us on a rugged turn (ha ha) away from the beach, briefly, for a dudes camping trip up to Flathead Lake in Missoula, Montana. Hard to say what he enjoyed most: the vistas, the rugged backcountry, wearing matching camo coveralls with his guys, or doing handstands out in the lake — but the best part is you don’t have to decide!

Rating: Dudes, getting back to nature, rock.

Spicy P is a big “I’m spending my summer reclining on a boat” guy, and really there’s no better person for the task. Once you’ve got the location (boat) and activity (reclining) planned out, the rest of vacation becomes a breeze, toggling between matching your probably custom bucket hat to your shorts and figuring out the best places to spend the day leaning back, sideways, and sort of flopping casually over. Maybe you’re asking, “But did he leave the marina?”

Rating: And I’m here to ask you, does it matter? 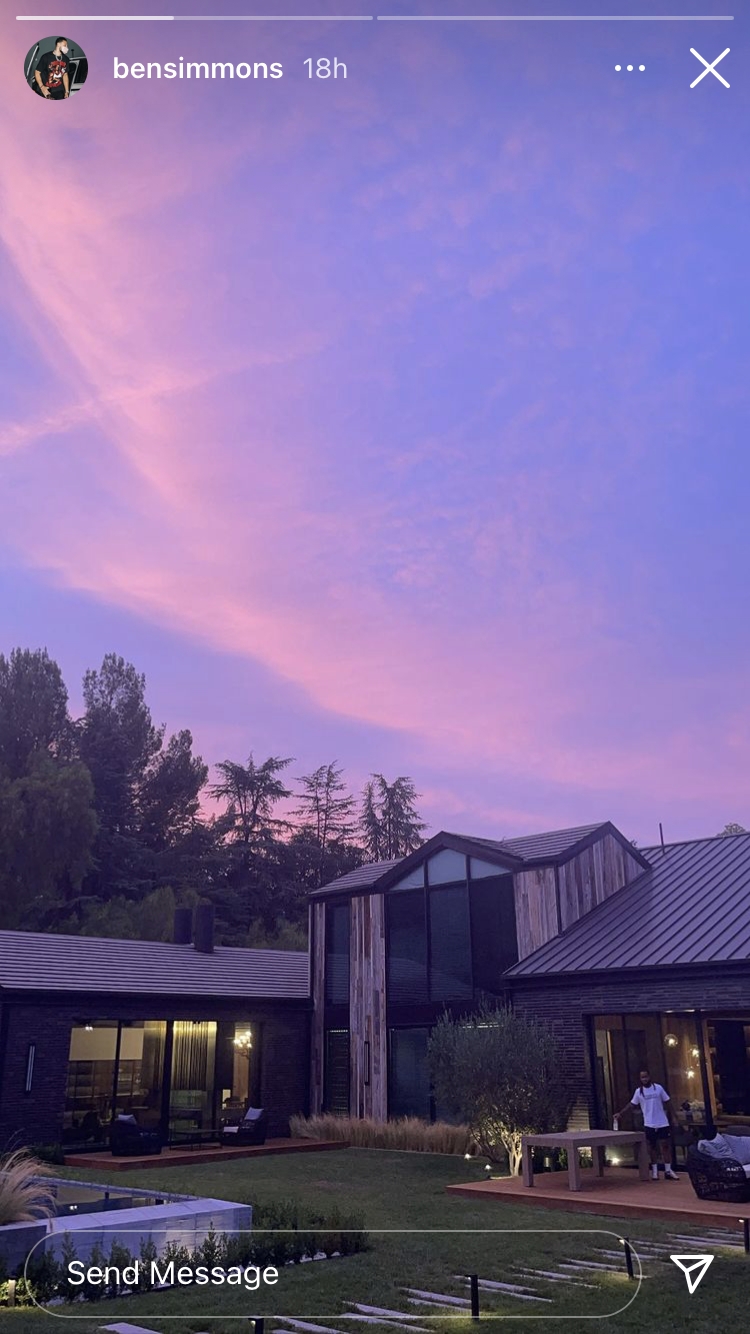 A lot has been swirling around Simmons this offseason, like whether or not he’ll be back with the Sixers and whether he or the Sixers want that, but not much has been swirling around him in terms of what matters, like where is he and is he on vacation? Well, this could very well be his beautiful home, but a swirling summer sunset that’s a cross between cotton candy and a resort drink melting down at the side of the pool at least gives me hope that the man is taking some time to just gently sigh and be like, “This is alright.” The kind of swirling we’re here for.

Rating: Here’s hoping a grill is being fired up just out of frame.

Let it not be said that here at SVW we do not not recognize some summers, or parts of some summers, must be spent catering to the whims of children to ensure that they too have a memorable one in that all too brief window before back-to-school. Millsap appears to have taken his kids to golf camp, actually led them there, and they appear to be pretty excited about it. Millsap is sort of a maverick in that you never know what his downtime will be spent perfecting (magic, somersaults, etc.), and it’s nice to see that runs in the family.

Rating: But still, I would love to see some new tricks from Millsap, the only respectable magician on earth. 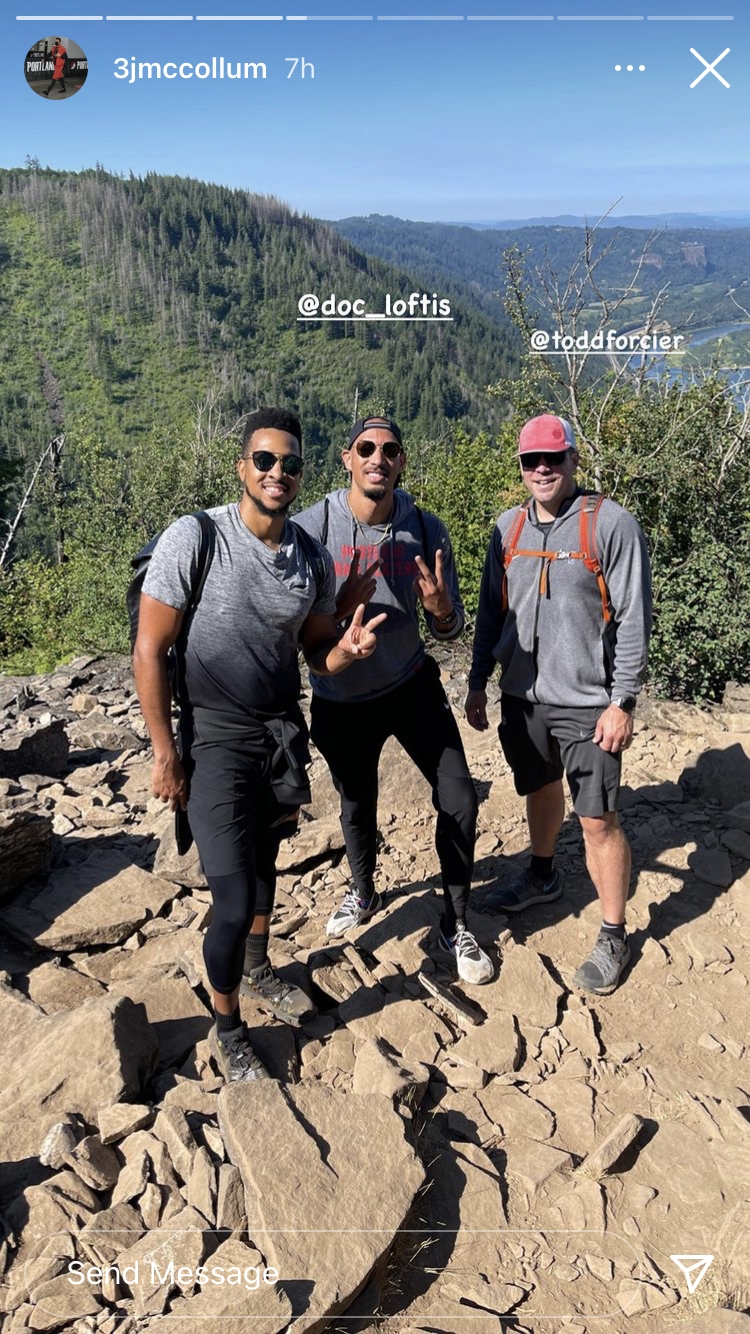 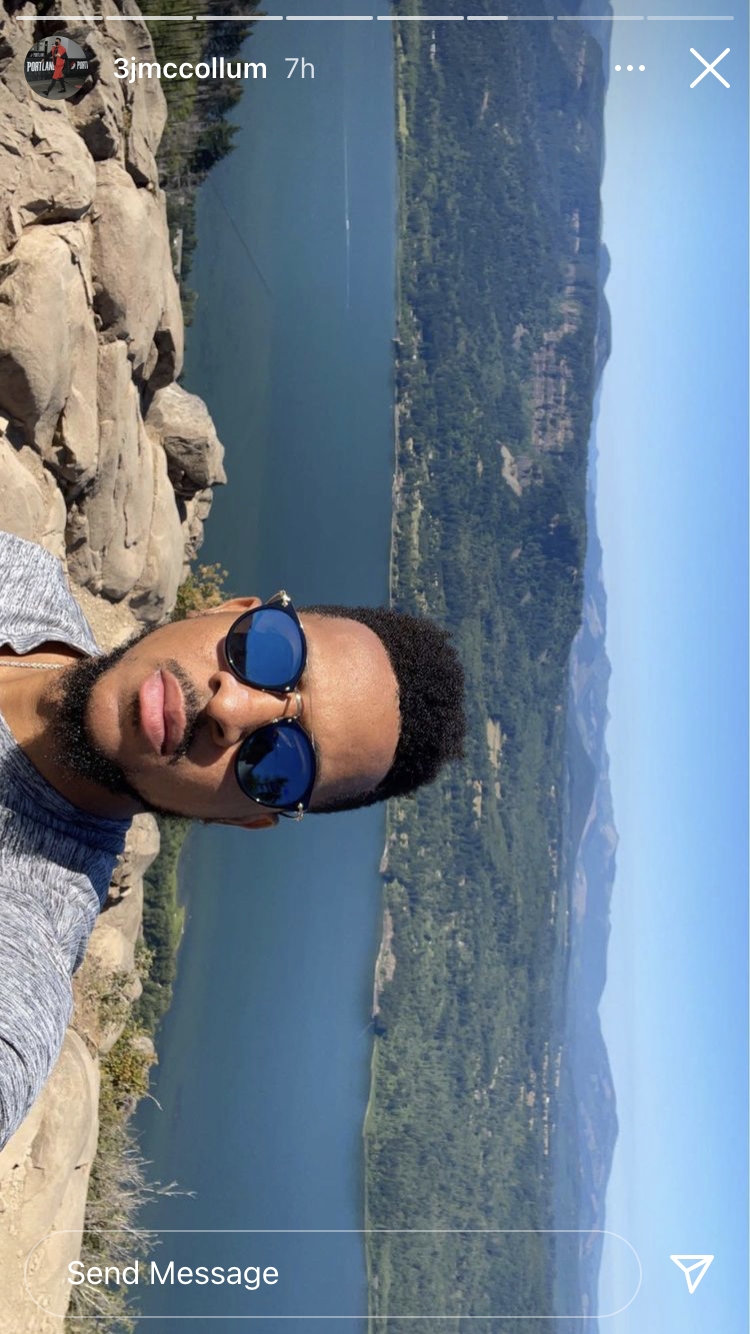 McCollum hiked up a mountain with two of his strength and performance coaches so you know this was a hike with a lot of “friendly pointers.” Jk, maybe it was chill, but I’m not sure there’s ever been a chill hike? At some point you get hungry, thirsty, tired, too hot, but when CJ got to the top to enjoy the view, he looks almost zen, so perhaps bringing your medical staff with you is the way to go.

Rating: Is this the new glamping? 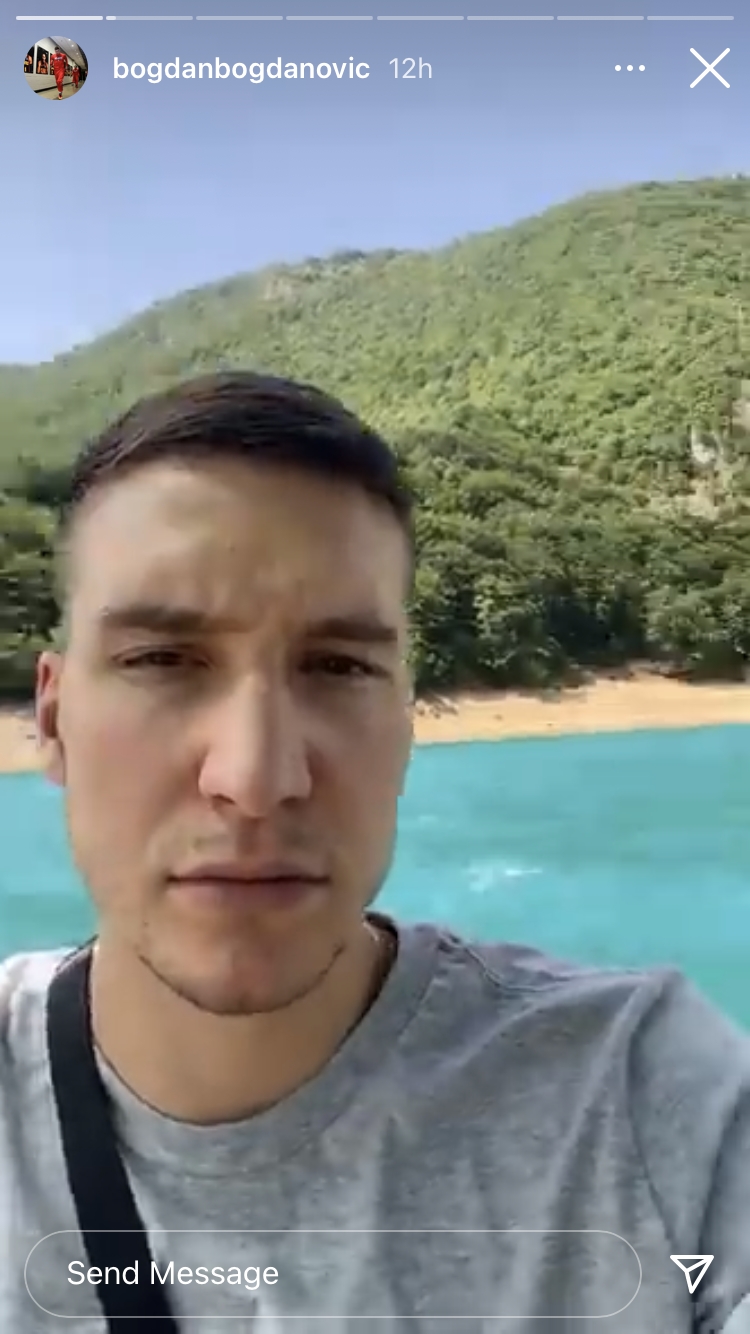 Bogdan also did a boat cruise and chill day, his was on Piva Lake, a gorgeous looking reservoir in Montenegro. While this capture might make it look like he was deadly serious about boating, he also, at one point, dipped his hand down over the side of the boat in that classic move where you feel totally in the moment while an easy listening ballad plays indoor head. For Bogdanovic it was likely something Serbian, but I’ve no doubt it bangs.

Rating: Turquoise waters are off to a great start this summer. 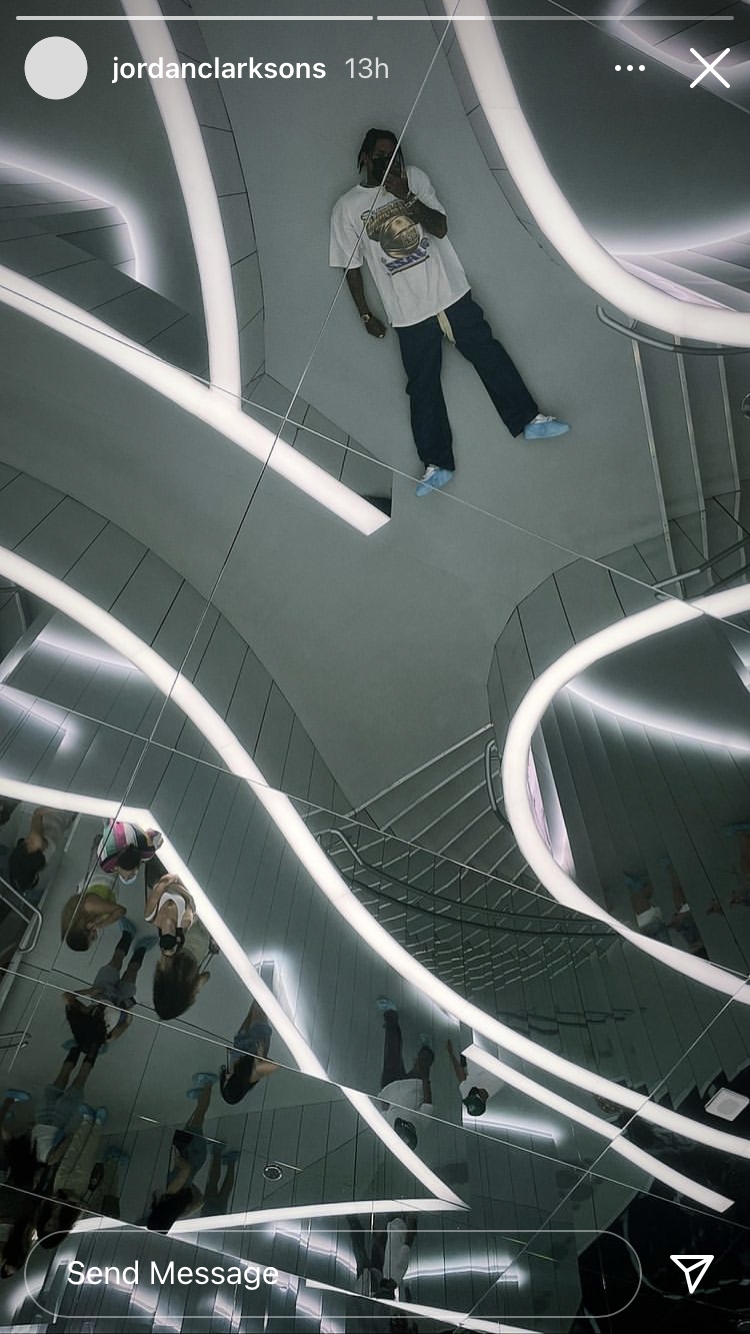 It’s Jordan Clarkson time … to lie on the floor of an art gallery and contemplate life, or maybe, because it’s summer, just think about where to go to eat something nice after this.

Rating: But what IS summer? And how does one even watch it?

In the cutest offseason crossover thus far, Tyrese Maxey threw out the first pitch at a Phillies game and because I don’t respect baseball, his pitching form seems perfect, if not avant garde to me.

Rating: The only time baseball has ever been good, for a second.

Mo rules because he’s giving us exactly what we all want and he’s not being coy about it — a big damn dump of summer vacation photos to revel in. We got parrots, we got fishing AND a self-depreciative joke, we got a little monkey, we have Mo’s dog dressed like a cute granny and with a cup stuck on its face, we have Mo’s agent getting fake mad that Mo is having such a good time being OOO, we have Mo on a boat, in the studio, Mo doing jokes, we have it all. A meaningful gift when this most precious and carefree time is at a premium.

Rating: Bamba’s Summer Dumps could be a SVW training camp.

Kleber went to Amsterdam and did three things everyone who visits Amsterdam should do: eat fries, ride a bicycle, look at the canals. People pretend basic is a bad thing, but let’s face it, basic on vacation is just sort of like “having a regular day somewhere else,” which, whatever, is pretty nice. 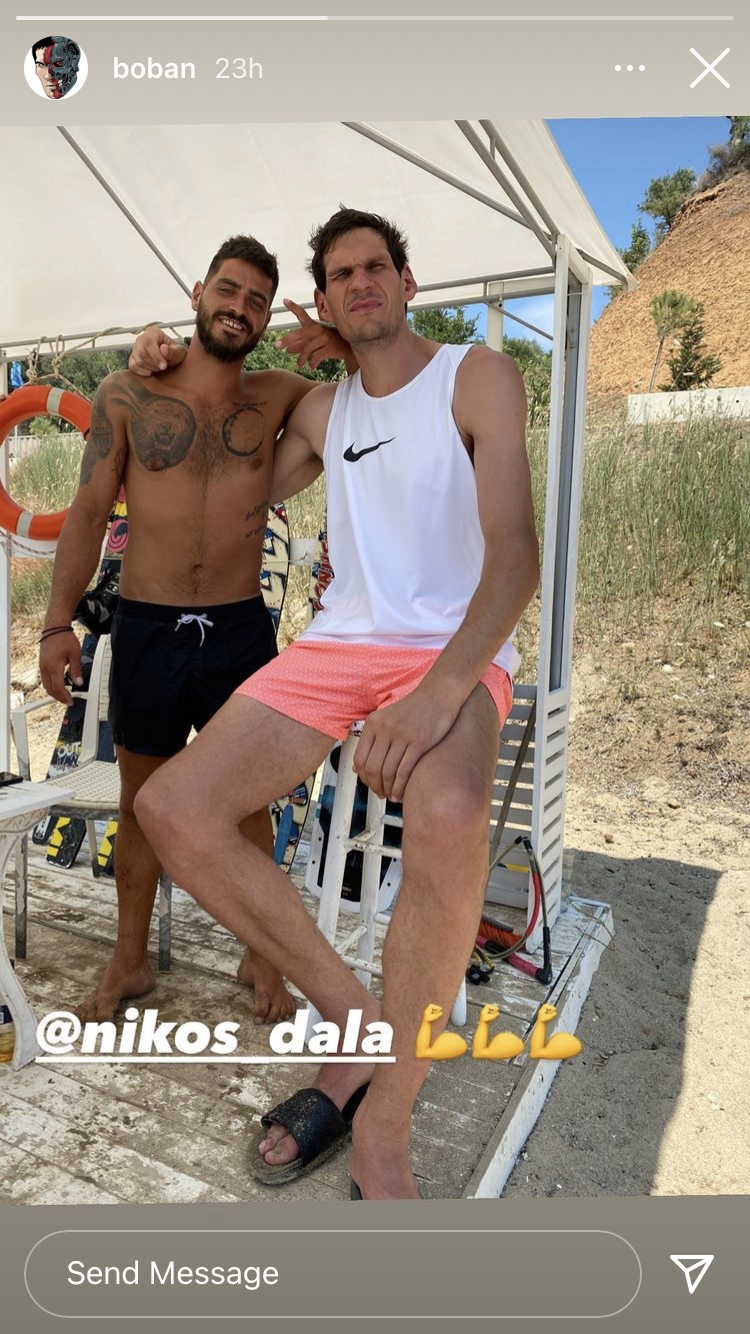 I really can’t wait until more American players decide to finally take Boban, Jokic, Bogdanovic, and more up on their probably long-extended offers to come spend a couple weeks in Serbia for the summer, where everyone is always chilling in the sun, on a pristine and less-traveled lake, eating some nice food, hanging out in the country, or being treated very nicely by extended family and friends.

Rating: Let’s make this a global vacation league, too. 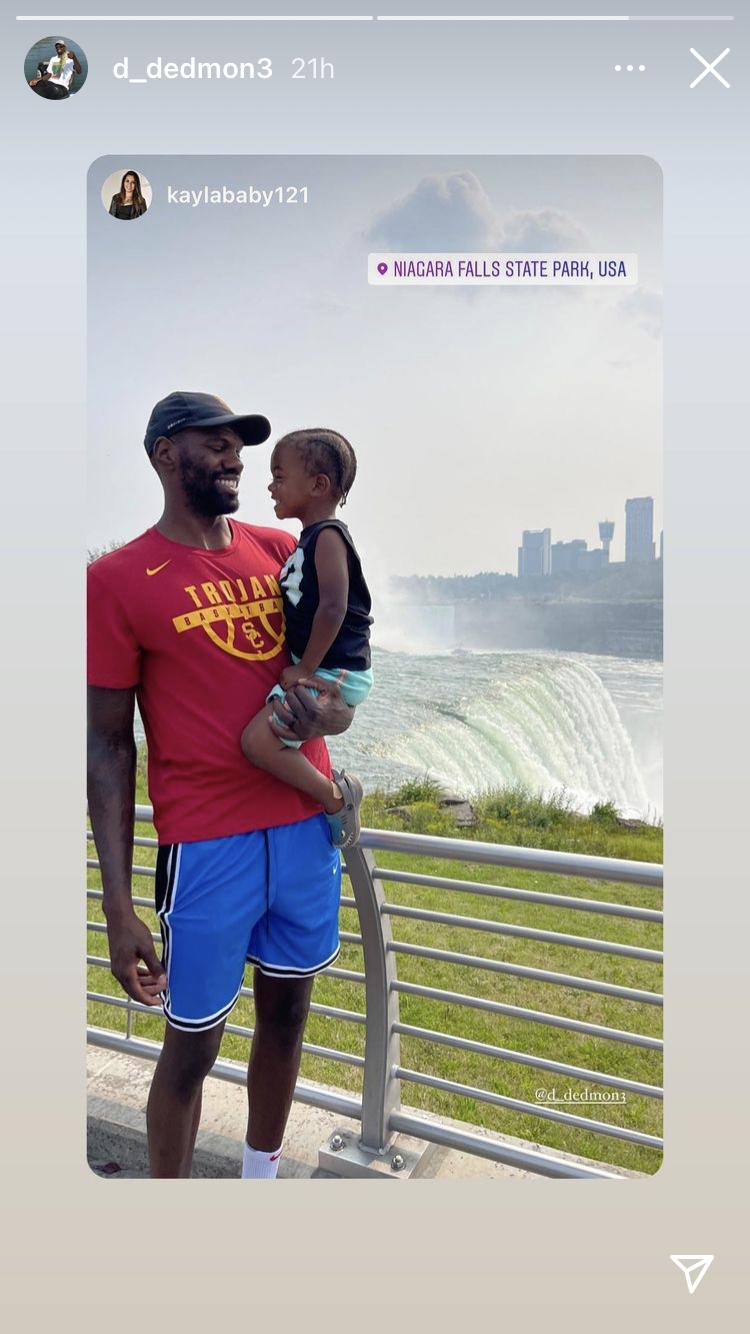 Dedmon went to Niagara Falls (American side) with his family and had a nice time.

Rating: That’s it! Close your eyes and I promise you can feel the mist on your face off the strength and wholesomeness of this photo alone. 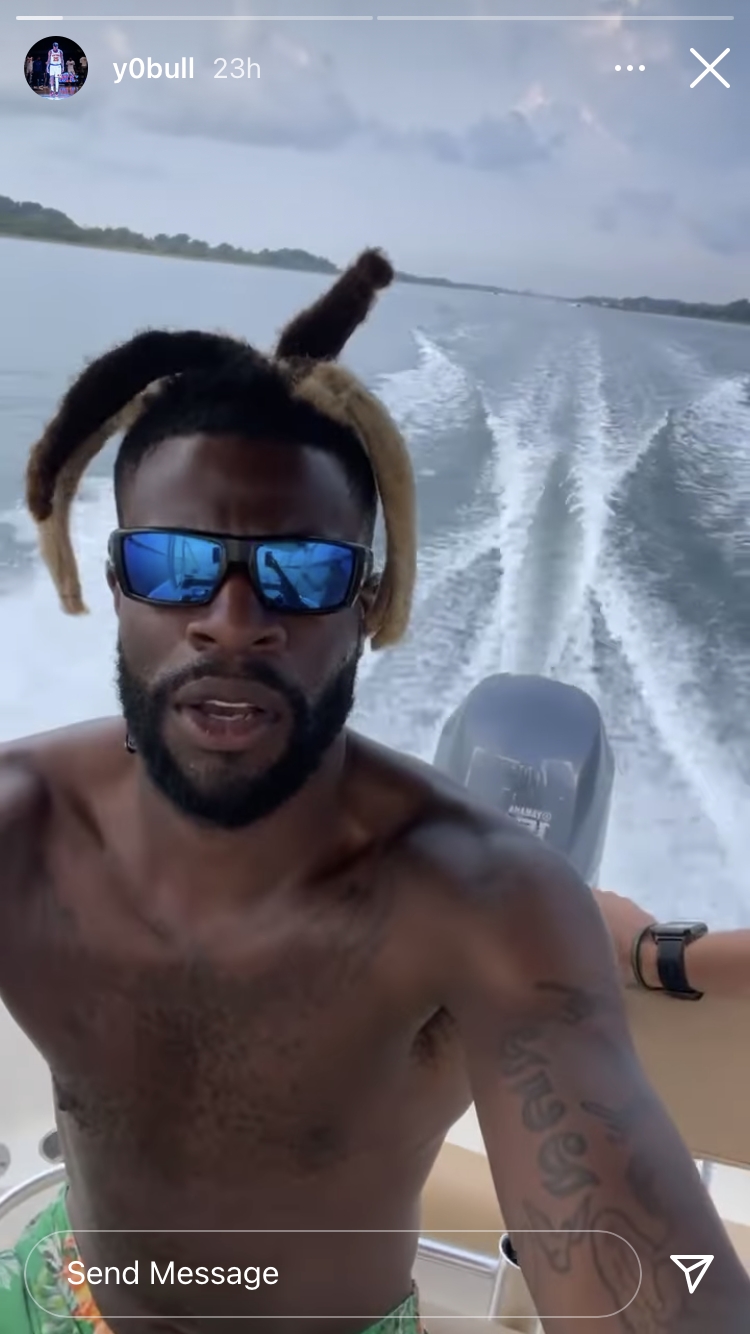 Reggie looked entirely at ease on the back of a boat that seems to just be RIPPING, and that’s why they pay him the big and meaningful bucks. Cool composure no matter the velocity.

Rating: He doesn’t even have a sporty string for his sunglasses! 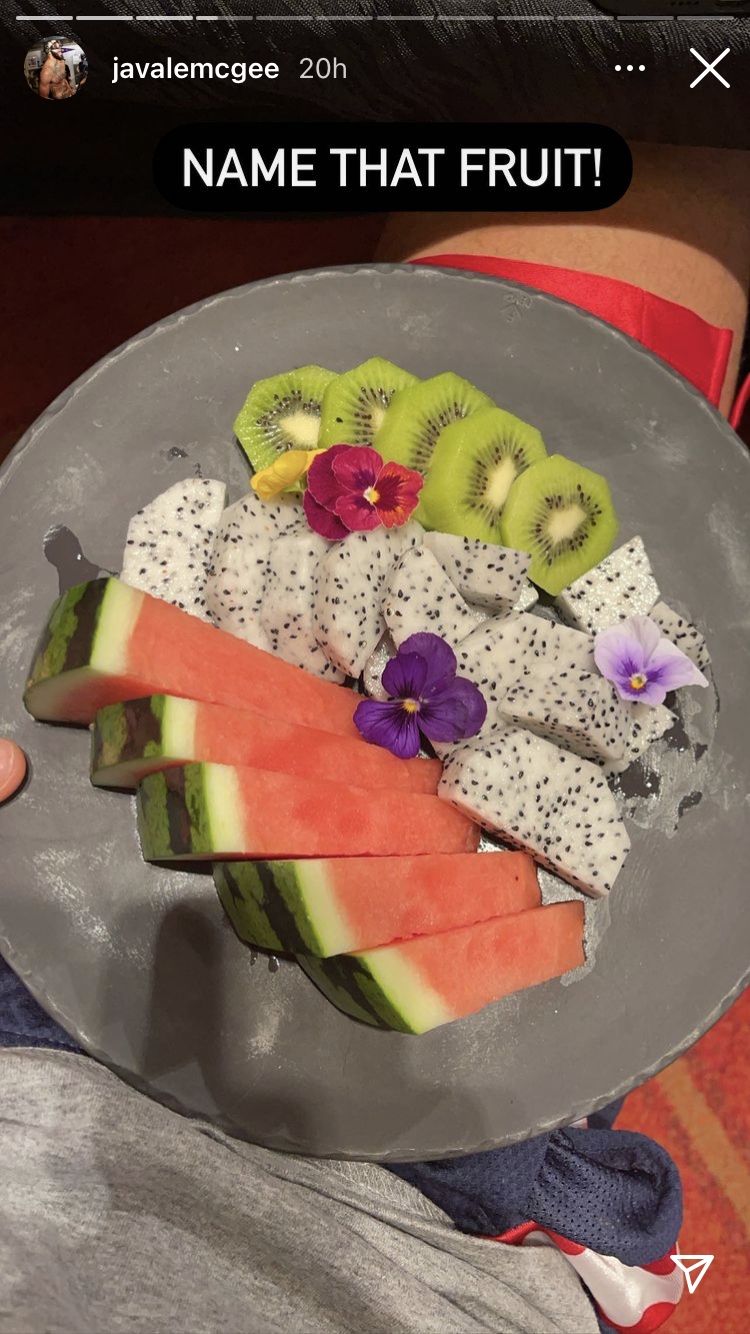 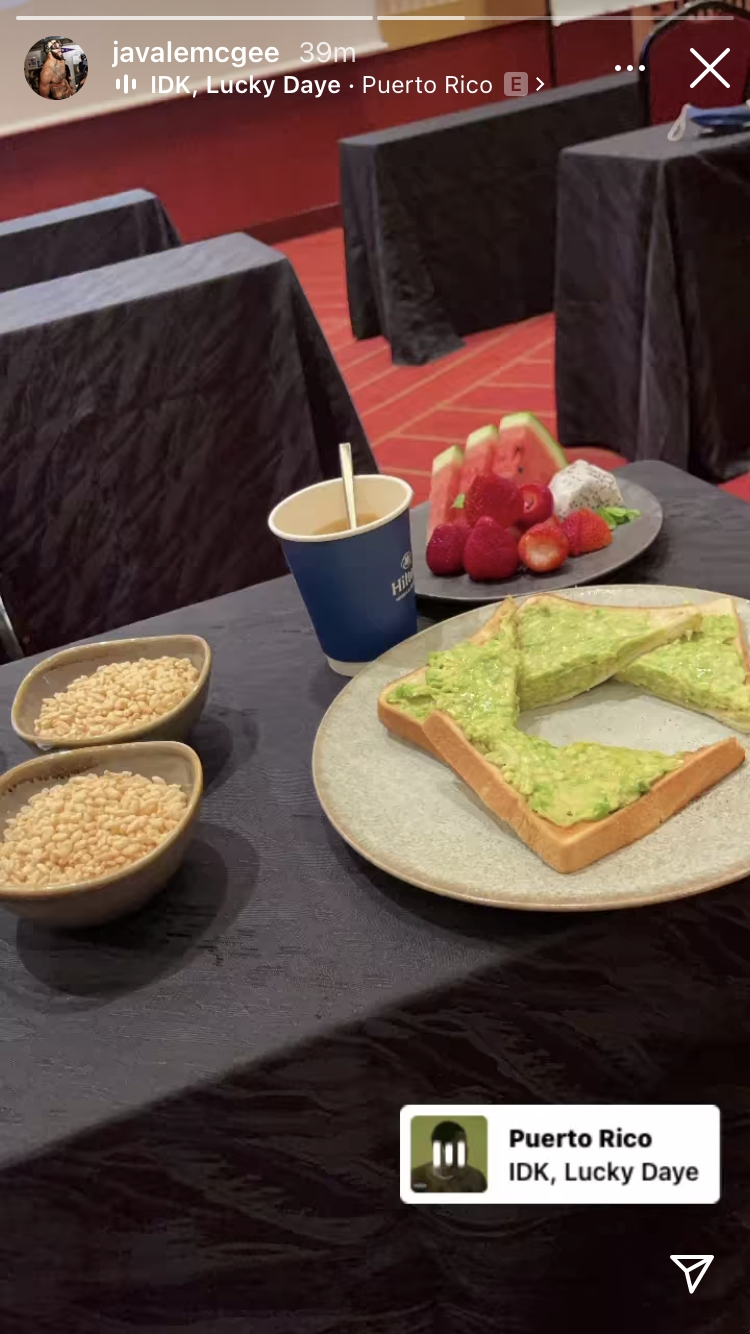 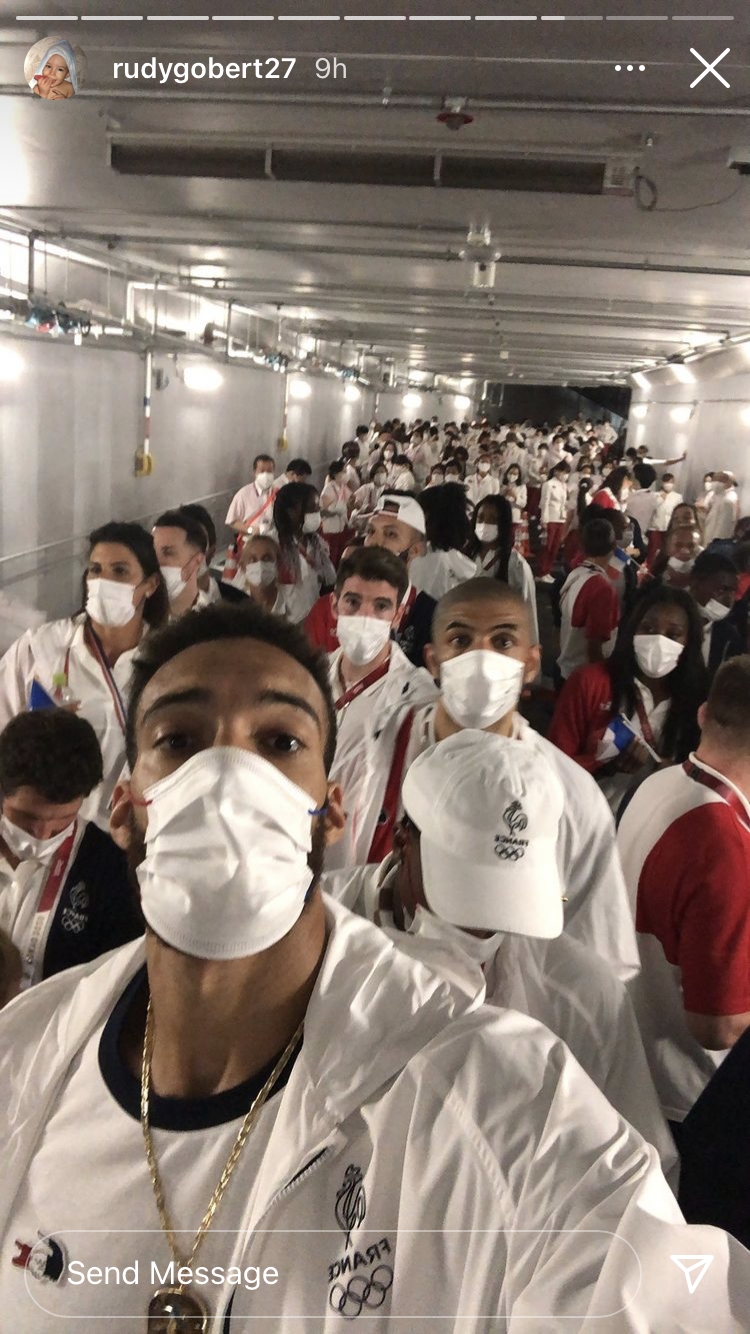 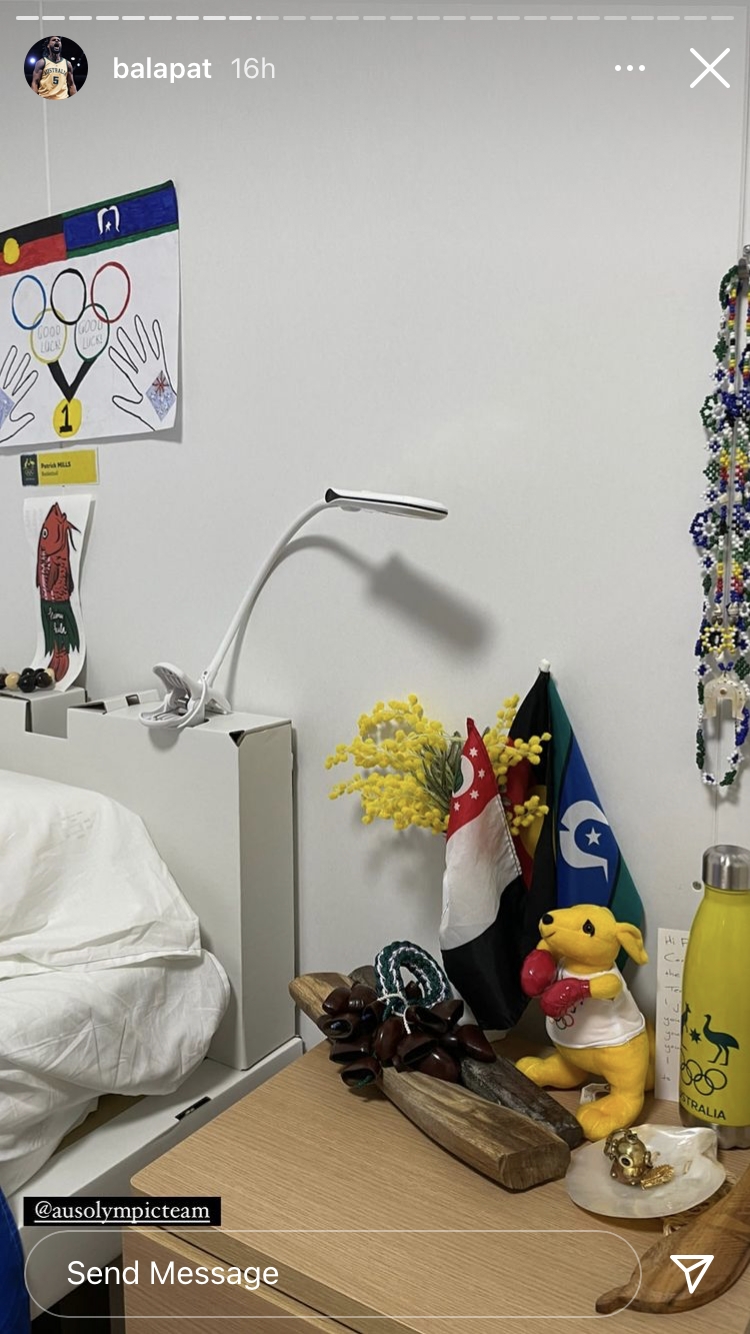 The U.S. men’s basketball team has appeared to have gotten itself together after a shaky start, and maybe it’s due to JaVale McGee finally figuring out what kind of fruit he’s being served, or this powerful Olympian vegan diet of Rice Krispies and avocado toast. Other Olympic highlights included a really excited Rudy Gobert in the tunnel with other French athletes, waiting to burst forth in the opening ceremonies, and Patty Mills’ cute set-up in his room. 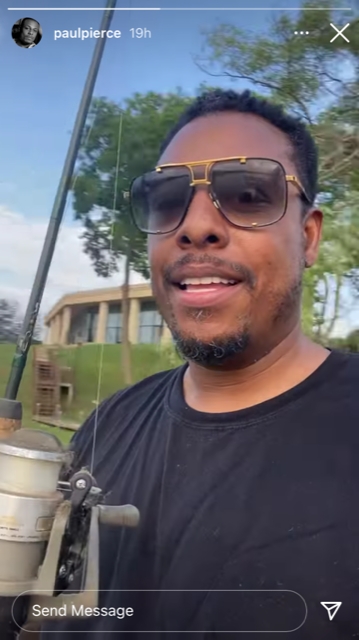 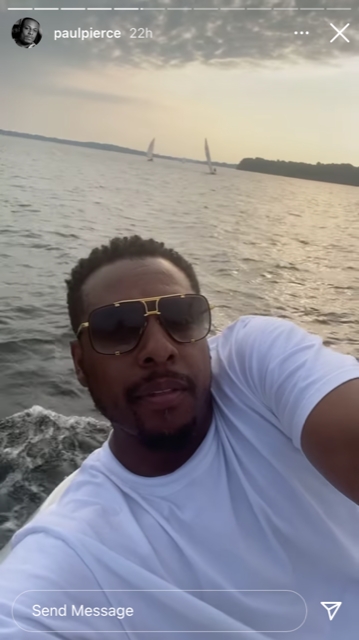 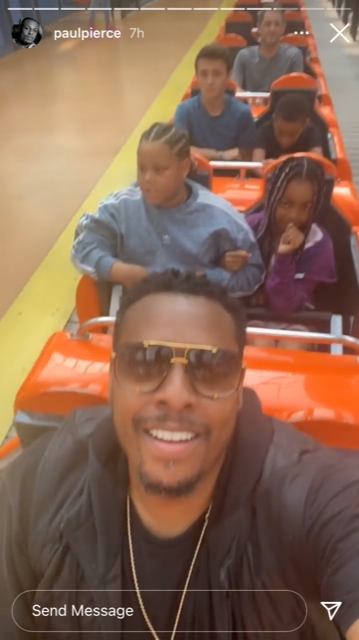 If you’re new, you’re probably wondering why there’s a section dedicated to Paul Pierce, and if you’re a return reader, you’re also probably still wondering that. Well, I won’t try to convince you, only continue to share without shame the summer exploits of a legend, that really look the same as his year-round activities. That’s the Truth and I hope you can handle it.