A Brief And Romantic History Of NBA Valentines

Much like the holiday itself, the origin of the NBA Valentine is a little blurred, scoured by the sands of time. Was St. Valentine a hooper, before he was martyred? Tough to say because there were at least three of them and basketball wasn’t invented for another, oh, 1,290 years after classical antiquity. But Saint Valentine of Terni looks like he would’ve been a bucket: 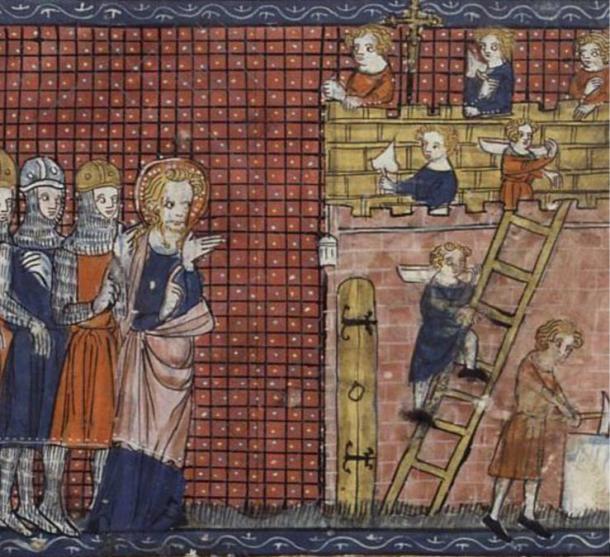 Do we have Geoffrey Chaucer to thank, one of the first ancient dudes out there writing about Valentine’s Day (“Volantynys day”, to him)? Probably not. The earliest known English language Valentine dates back to around 1477, with cards starting to get mass-produced at the end of the 1700s. Clearly I only claim to be an amateur historian but it’s fair to say that the earliest version of what we now understand to be the archetypal NBA Valentine surfaced around that time, too, though its best known iteration did not come to light until 1989. 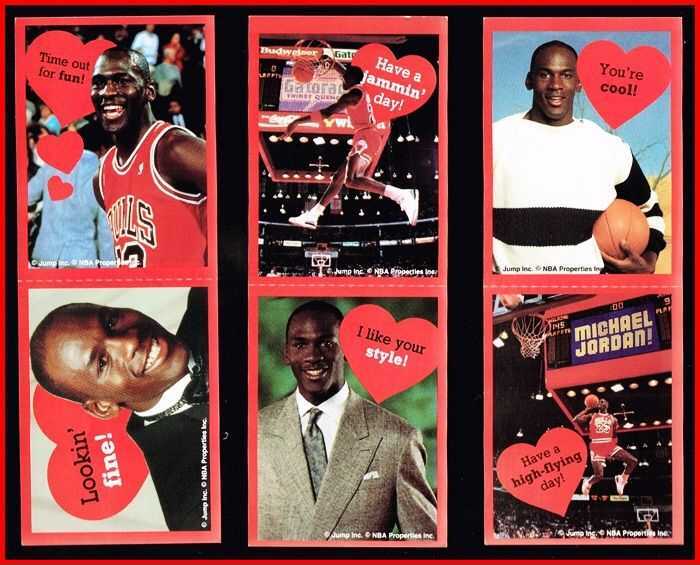 That’s right, the classic Michael Jordan, multi-card, pre-perforated sheet. There were two historic sets, the aforementioned 1989 set and a 1991 set. The best part about these cards is the amateur collage-y feel to them. The placement and frequency of the bright red hearts adorning each card are bold, so much so that they occasionally overlap Jordan’s head as if the heart is really the star here (it is!). And the text nestled within the hearts is just as directly declarative. Reading them you get the sense of someone shouting at you from a moving car, but when you make eye contact they only wave excitedly or give you an earnest thumbs-up. Honestly, Chaucer wishes he could.

And there are a lot of them. 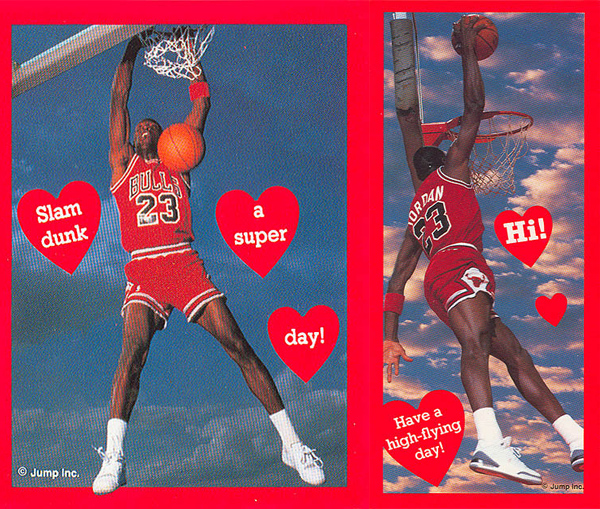 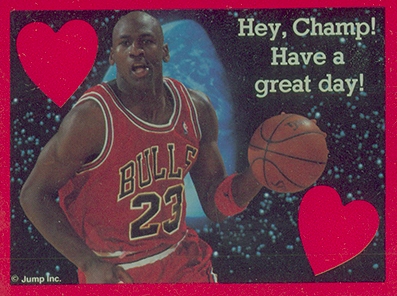 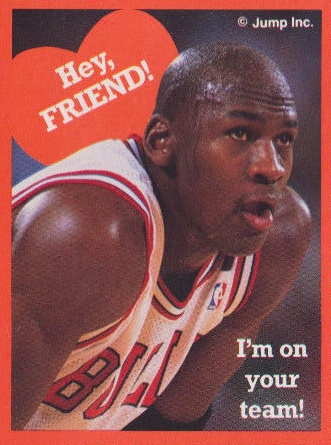 I can already picture the card I would have agonized picking for a crush (“Hi! Have a high-flying day!”) and then the one I likely would have handed them at the last minute (“You’re cool!”), dunking only on myself.

Jordan continued to dominate the Valentine market for some time, with Space Jam cards surfacing in 1996 and carrying the art form through to the end of the decade. But after that, as the world figured out the internet, the historic tradition of the NBA Valentine dwindled. That was until, thankfully, team marketing people and community managers rose from the murk of the ages, like a second great Renaissance. 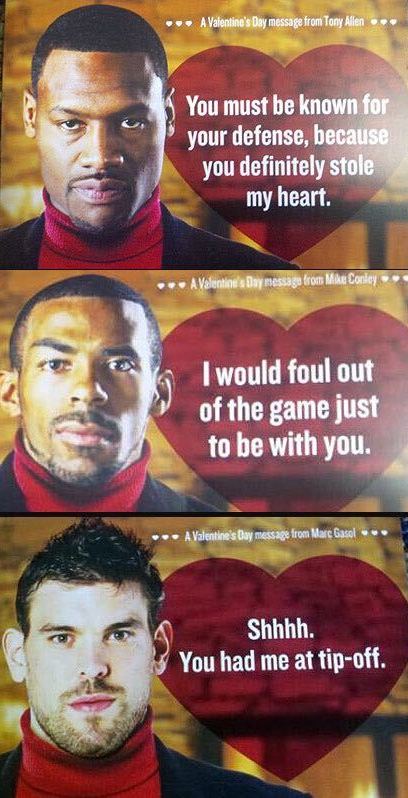 Around 2010, judging by a dewy Marc Gasol and a stoic Grindfather sharing the roster, the Grizzlies came out with these physical cards that my whole heart believes were handed out at games. Harkening back to the Jordan Valentines, the hearts are overlarge and the statements declarative, though much wordier, and resplendent with double meaning. On first glance at Mike Conley’s card, if you didn’t really know the man, you’d be like, “That’s sweet”, but it’s only knowing Conley has never received a foul in his career that makes the true sacrifice of fouling out of one to be with you all the more agonizingly poetic. 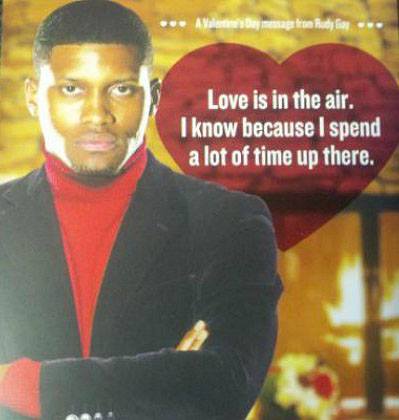 While I think their heads were perhaps photoshopped onto the same body of someone wearing a red turtleneck and blazer, I like to imagine that they all dutifully donned this much more romantic uniform to fully commit not just to the work, but to the emotionalism that frankly leaps off the flimsy cardstock.

NBA Valentines have existed not just through times of great joy, but through periods of upheaval. When Hurricane Katrina forced the Hornets out of New Orleans and into Oklahoma, the great tradition of NBA Valentines went with them. 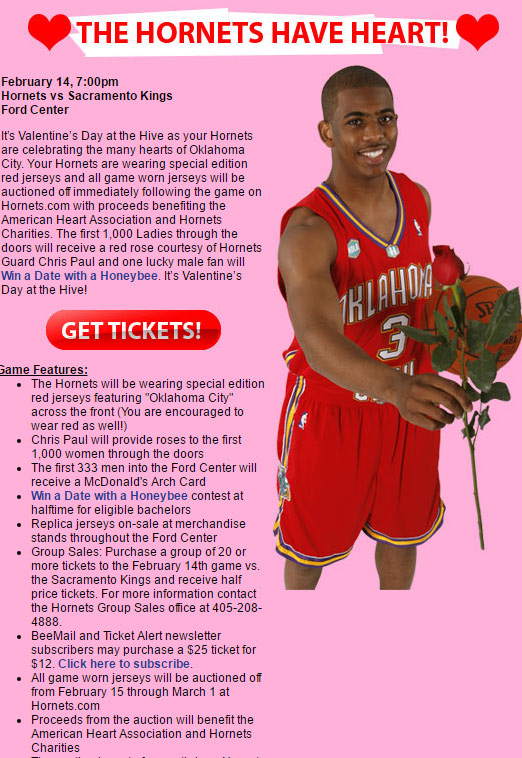 A baby-faced Chris Paul offers you a rose through space and time now, but then, he literally offered roses to the first 1,000 women through the doors of the arena. Dudes got a McDonald’s card. There are times I wish the NBA did not become too cool and so glossy that it was removed of everything clumsy, like teams making posters in MS Paint that cut off the lower legs of their players, or putting on themed nights that were a little embarrassing, and this is one of them.

This mid 2000s resurgence was perhaps the strongest and least self-conscious period of NBA Valentines, with focus for the tradition dwindling around the time All-Star voting shifted to the practice of being largely decided by fans across social media. Team accounts were pushing campaigns for voting in the lead-up to Valentine’s Day and the start of All-Star weekend, not putting their time and energy into fleeting thrills of the heart. But even in the modern era some teams have, bravely, persisted. 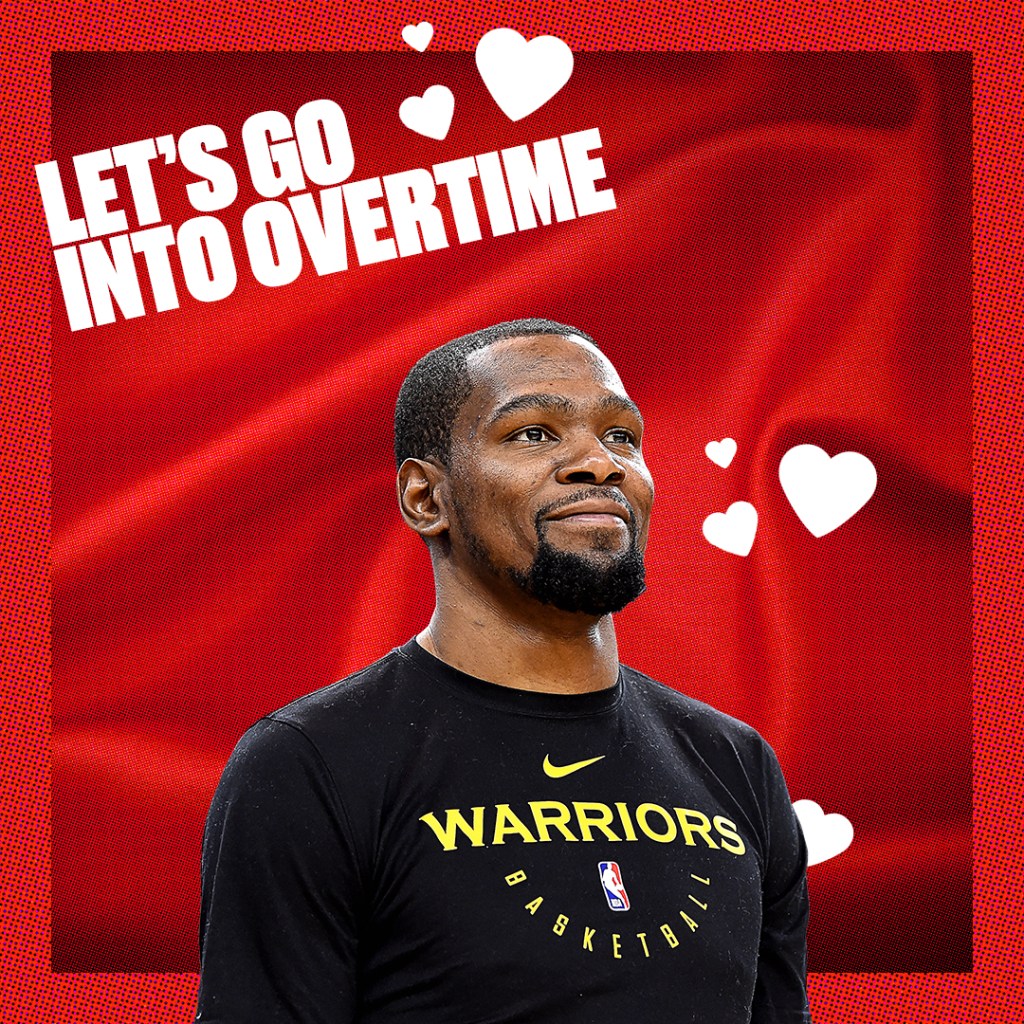 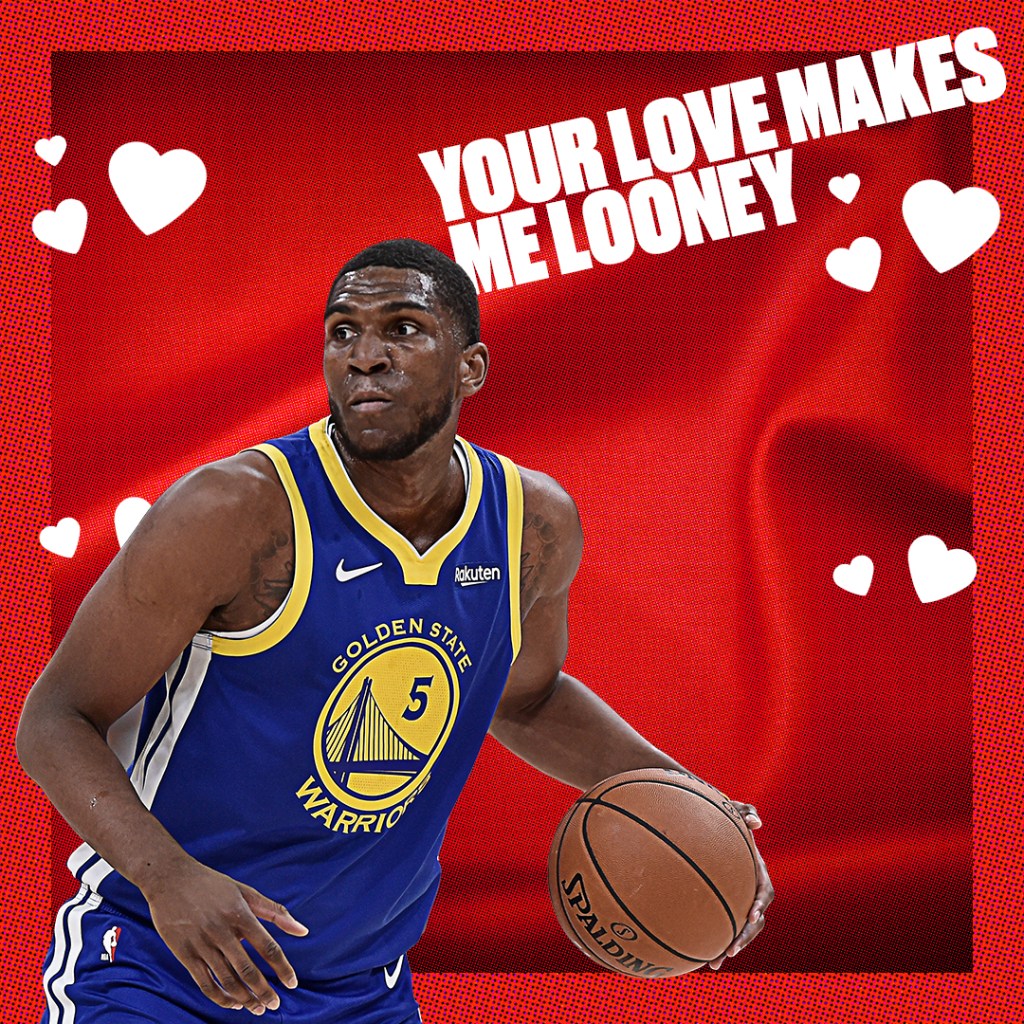 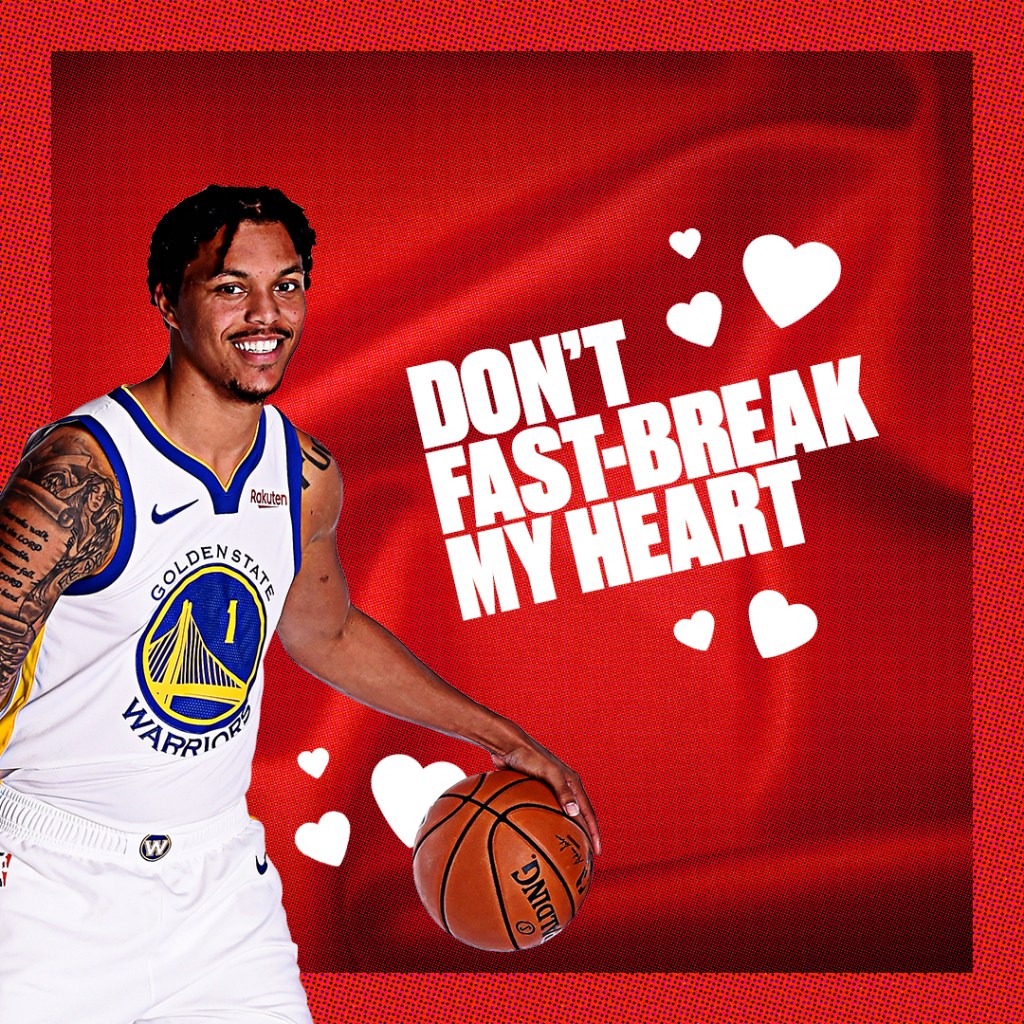 In fact, there are some NBA analysts (of the heart) that insist the reason the Warriors dynasty was so vehemently hated was because of their unrelenting Valentine’s Day offerings, season after season. And it makes sense, win three titles in four seasons and refuse to skimp on romance? Maybe tenderness was the secret to winning all along. 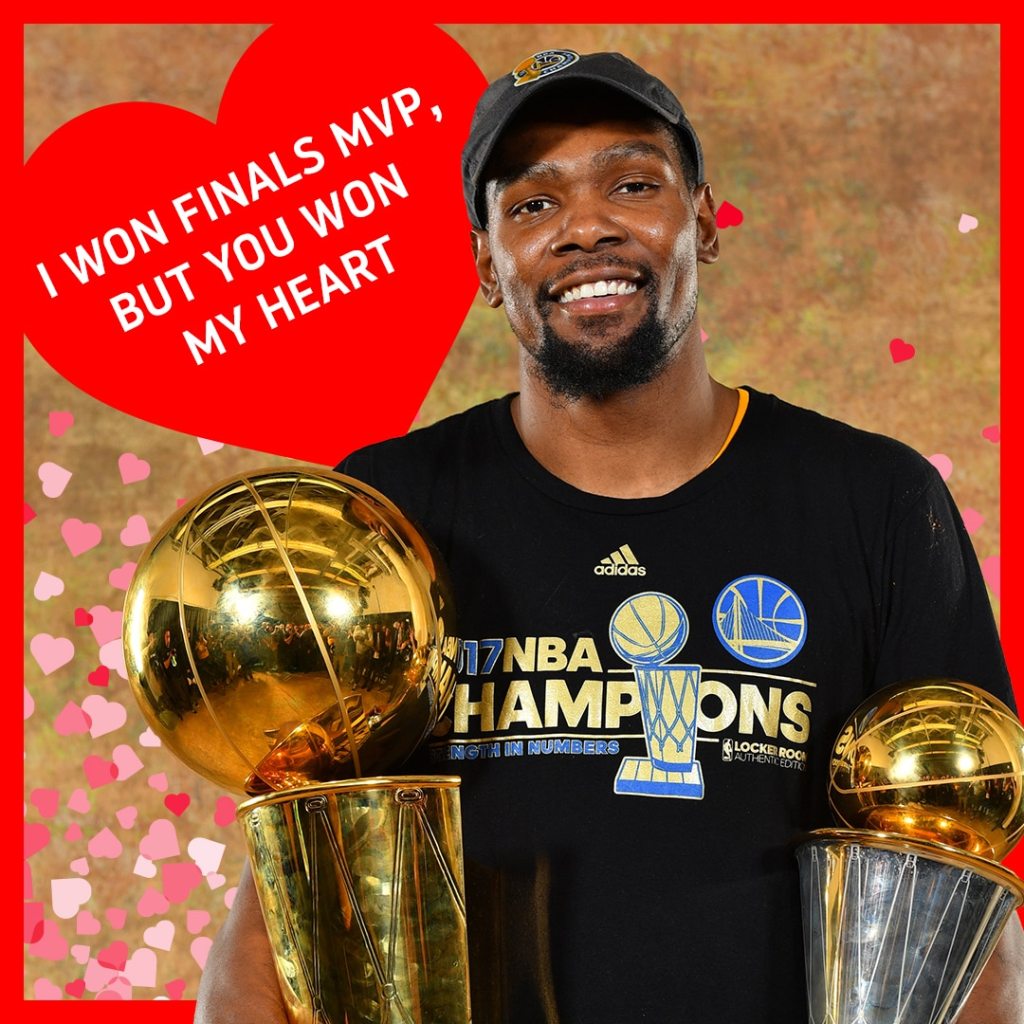 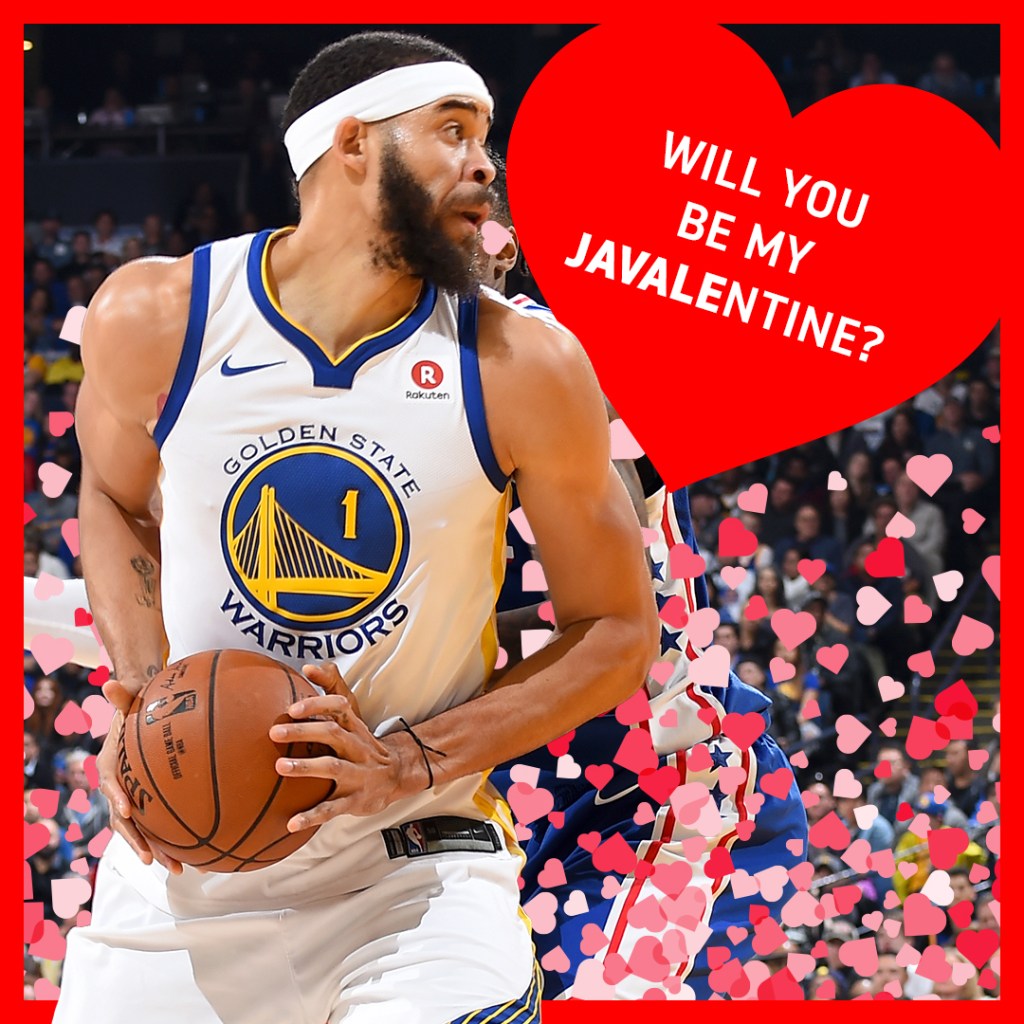 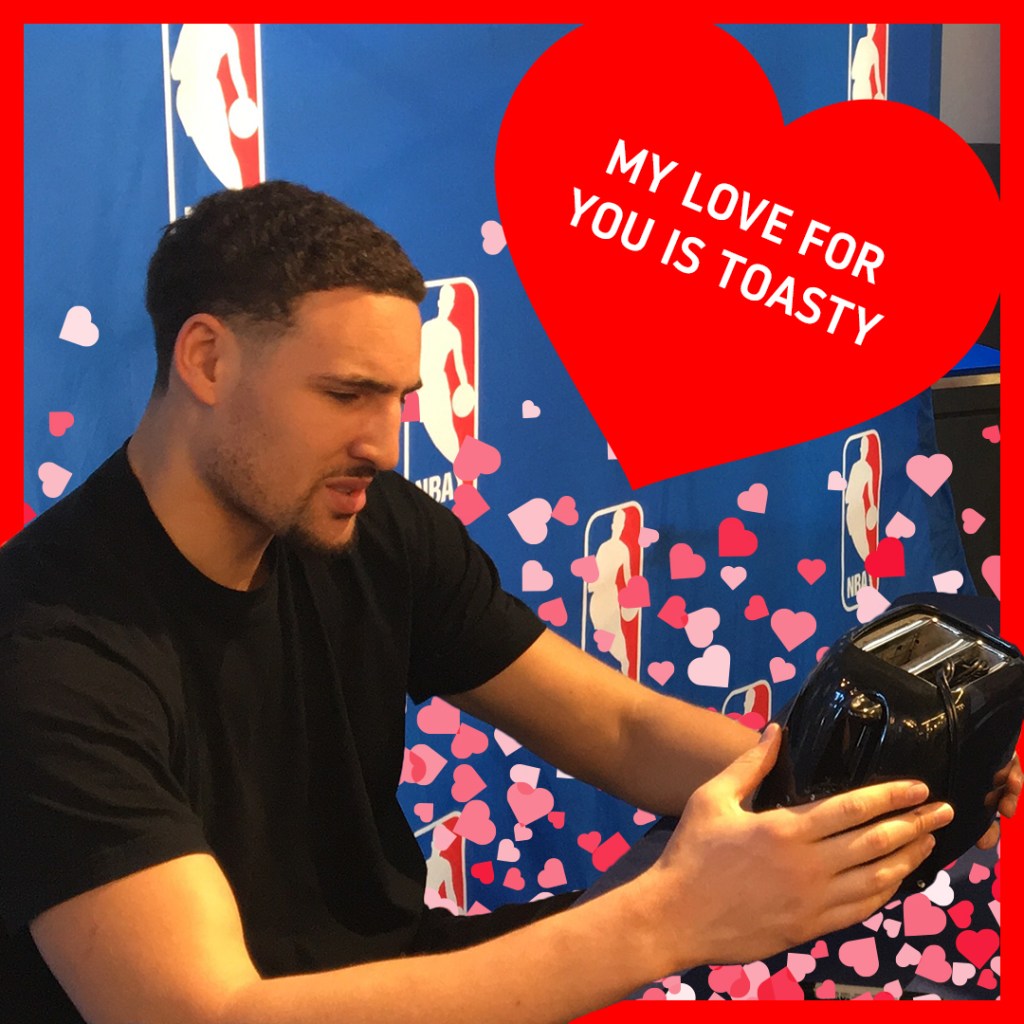 Say what you will about the Warriors, but they’ve never blown a 3-1 lead on love.

Of course, no pantheon of passion would be complete without the honourable and very weird mentions of fan-made NBA Valentines. Many of which instantly lodge into the deepest and secret chambers of the heart, like a dagger from deep with 0.5 seconds left on the clock. 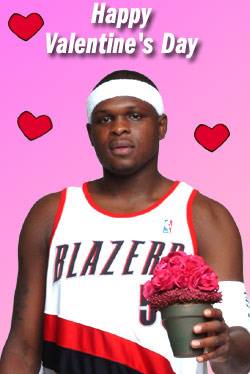 There is Z Bo suspended in a pink plane of existence, offering you a pot full of roses with a trusting and hopeful look — will you accept? 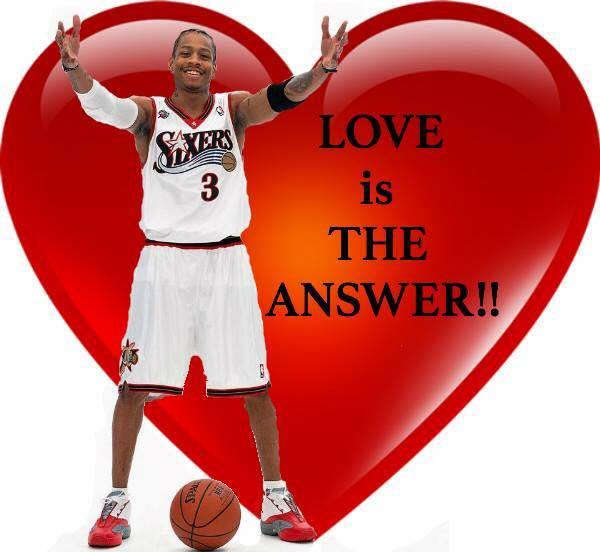 And A.I. finally admitting what it was he was trying to get to when he stepped over Tyronn Lue. 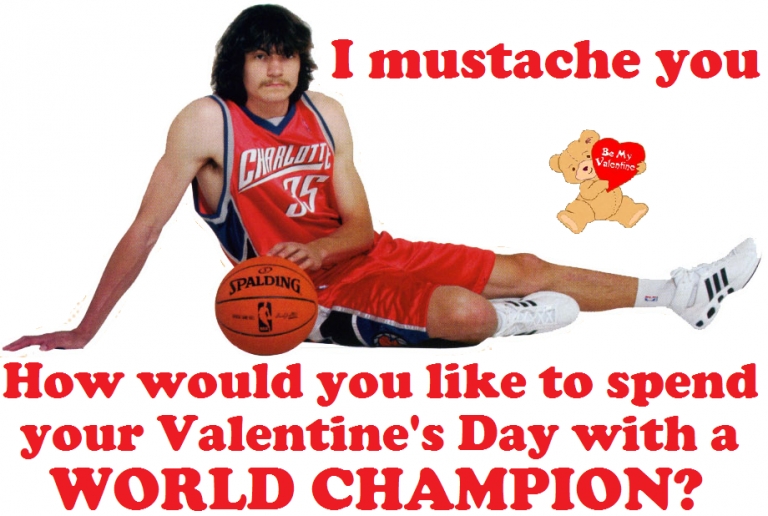 Adam Morrison, two-time NBA champ, plaintively asking for you to be his. 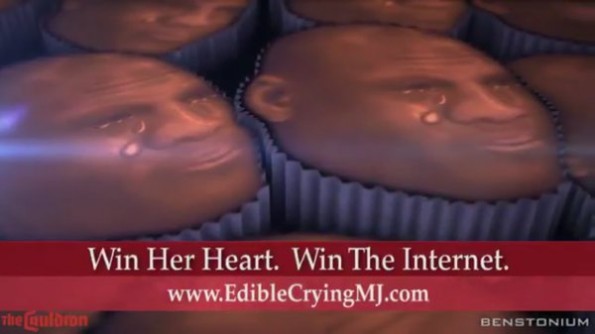 And finally, ultra photo realistic crying MJ cupcakes that with the ruffle of the muffin cup look, ironically, like another big fan and MVP of this twisted day of romance and yearning, the big bard himself, William Shakespeare. As poetic as it true that in ball, love and life, all things eventually come full circle.