THE ADULT FILM MINUTE: Once per month, except for occasionally when it’s more frequent than that, Dr. Chauntelle Tibbals will be telling us a little bit about what’s going on in adult entertainment and why it should matter to you.

Note: Some of the following links are SFW. Others, not so much. Click with common sense.

The Exxxotica Expo is a roving convention dedicated to love and sex. Past events have been held in Miami, Los Angeles, Edison (New Jersey), Chicago, and – most recently – Dallas.

I traveled to Exxxotica Dallas recently to moderate a talk – “Trainwreck: How Hollywood Portrays Sex.” Ashley Fires, Sydney Leathers, Kendra Sunderland, and Flash Brown accompanied me during the seminar. Here’s a picture:

The event was great – great questions, great focus, great energy. The crowd did however go into a deep distracted tailspin-swoon at one point when Flash described the process he underwent to have a sex toy molded from his 11-inch penis…

But there was another force even more powerful than Flash working to lure Exxxotica-goers away from my talk of Hollywood sex portrayal: Jesus. Or at least, people claiming to speak for him.

I arrived at the Dallas convention center several hours before my event on Sunday, August 9. The day before, Stormy Daniels had shared this picture of herself in front of the show entrance via social media.

24 hours later, the same protesters were once again out front. And they were shouting. At everyone. It was a pretty paltry demonstration – two women and five men (one of whom was filming with a handheld camera), no crowd or onlookers, and three security guard sorts watching/yawning from afar. As I walked near them to enter the convention hall, they started shouting at me. “Sinner! Fornicator!” I waved.

Immediately upon entering the convention hall, I saw Stormy and Allie Haze at the Club Spotlight booth. Looming behind them was the extra-large Jesus Loves Pornstars/XXX Church booth.

Stormy was giddy – “Did you talk to the [the protesters]?!” she asked. The self-proclaimed cyber stalking ninja informed me that they were from Bulldog Ministries, a “street preaching” organization based in Houston, TX that travels around the state.

Outside in the protest area, a woman handed me a simple photocopied pamphlet covered in bible verses, which I put in my bag as I approached the guy shouting the loudest. His name was Clarence.

I asked Clarence what he was doing out there. Why were they yelling at everyone?

C: You’re not a Christian.

DrCT: But how do you know? Or, what if I’m a Buddhist?

C: It’s not an opinion. I could be the answer to somebody’s prayer for you. Someone saying, “Oh Lord please don’t let her die without someone telling her the truth,” and I am that answer. I am the answer to their prayer. I am warning you in the best way that I can that you need to turn from sin and get right with God.

And you may think I don’t care about you, but you actually are a soul. You have a soul, and your soul not only matters to me, it matters to Jesus Christ who died for you. And the blood of Jesus Christ did not give you permission to live any way that you choose. His love is not in acceptance of sinful lifestyle. People today want to use the love of God like a blanket from their sin. “God loves me and he’ll accept me as I am, which means I can do whatever I choose,” and that’s not the truth. God accepts some things, and he will not accept others – and he will not accept sin. He won’t ever accept you.

I thanked Clarence for his concern and told him I would take my chances with the fornicators. God refusing to accept me without first getting to know me, while simultaneously wanting to be friends with Clarence (WTF?!), stung a little – like junior high.

Back inside the convention hall, Tanya Tate explained that most of the adult performers and local models had been using a back entrance – because any time a protester saw someone who looked like an adult entertainer they would begin following them and shouting “Shame on you!” and “Whore!” and the like. Consequently, there was security everywhere.

A few days later, I connected with Silvia Saige, who I’d heard from Stormy and Tanya had been attacked by protestors. After asking her if she was okay, she told me this story:

Oh, I am more than ok. I don’t mind telling the story of what happened. But the truth is, I don’t have much of one to tell. I walked over to the protestors outside of our hotel on night two [August 8, 2015]. Words were exchanged, a punch thrown, a drink thrown, and cops that seemed to be blind to everything but me throwing a drink [were called/arrived]. I was made into the criminal and told if I didn’t remove myself, I was going to jail. So I left.

It was a man who hit me. I would say mid-30s. He was most certainly a protestor as they were all holding their signs and shouting hate.

Yeesh. Like Stormy, Silvia had also taken a protest selfie. Maybe they were pissed?

Protestors and all! Thanks Dallas! pic.twitter.com/q97iMW3SC9

As I made my way deeper into the show, I stopped and chatted with attendees. I met couples looking to learn/see something new, dude-bros looking to eyeball babes, men looking to meet the starlet of their dreams, and women looking for sexual spice in whatever form. Every single person was excited about Exxxotica being in Dallas – something like this had never happened there before!

Eventually, even I came across an organization that was new to me – Restored Hope Ministries (RHM). They were an interesting bunch.

According to their mission statement, RHM seeks to “Restore women and their children to normal lives who have been affected by the adverse conditions of life that include sex trafficking, slavery, abuse, poverty and interaction with the Criminal Justice System” [sic].

Every effort to work against sex trafficking and abuse in a manner that is in of itself not also coercive and/or manipulative is wonderful, and different people respond differently to different messages. But I wondered how many people in need they’d find at Exxxotica, where a booth cost anywhere from $1200 to $2000. I wondered if maybe all that money and volunteer time could’ve been better spent elsewhere.

According to an RHM volunteer named Marty, they usually did outreach on the streets but today they “were kinda in the hotspot.” In their daily practice, RHM had trouble reaching local women who were in crisis – women existing behind a wall of pimps and guns and prostitution according to RHM’s executive director, Sam Pollinzi. They thought they might be able to connect with some of these women at Exxxotica, but they also weren’t sure about who or how. And after 15 minutes of conversation, I wasn’t either. 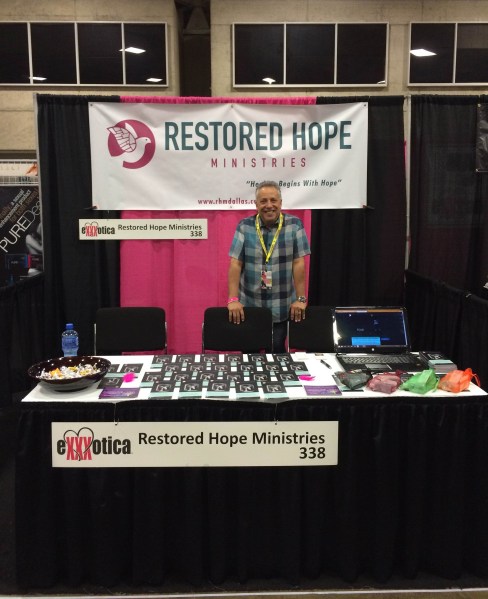 Just before my talk I ran into Joanna Angel. I asked her, as an adult convention veteran, what she thought about the show, Dallas, and all the different dimensions of Jesus present.

She told me she’d actually been treated pretty nicely in Dallas and had seen more robust protests in other cities, including Los Angeles – no big deal.

“They’re holding up anti-abortion signs and anti-gay signs. I even saw one anti-Muslim sign. Maybe they just bring all the signs that they have because it just seems like they don’t understand what the hell is going on [in here],” she mused. “If you’re going to hate something, you should at least know what it’s about so you can effectively target your dollars and your time.” 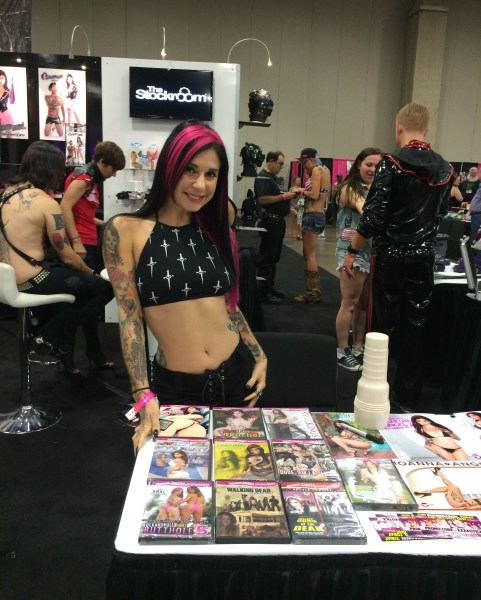 We chatted for a few more minutes before Joanna said something that really gave me pause. Regarding each “protest” element present at Exxxotica, from the super hateful to uncertain activism – “Well, they got us talking about it so maybe that was the plan all along and they achieved their goals.”

Joanna laughed, but she was right – and was I going to spend hours writing and quote verifying and image cataloguing just so I could give poisonous organizations another notch on Google?

In the end, I (obviously) decided yes, yes I would. Because all communities are part of wider society, all voices deserve to be heard, and surely we all need to know about what went on at a convention in Dallas.

Thanks to Stormy Daniels for identifying the organization, Bulldog Ministries. Also, I audio recorded all the interviews informing this piece, after first asking permission.