Did you hear that Jimmy Fallon reunited some of the cast of Saved by the Bell on The Tonight Show? In addition to recreating the theme song to The Fresh Prince of Bel-Air, Fallon welcomed Mark-Paul Gosselaar, Mario Lopez, Elizabeth Berkley, Tiffani-Amber Thiessen and Dennis Haskins to the show to reignite our nostalgia of the most ’90s thing ever created. The only reason I’m asking if you heard about this is because I’m polite, and maybe you’ve been in a coma or forgot your Facebook password and didn’t see your friends sharing it.

In the wake of this reunion, people have been asking a lot of questions, like where were Lark Voorhies and Dustin Diamond (short answers: ummmmmmm yikes and stabby stabby), and why wasn’t Leanna Creel asked to join them (settle down, she didn’t actually write this)? As always, I’m more concerned with the accuracy of such a throwback, so I’ve decided to postpone my usual Friday brain surgery and rocket science to break down this entire segment and explain the background references and callbacks to my fellow Bayside alum.

Let’s begin this important discussion with a look at the halls of Bayside High, home of the Tigers…

This sign is a reference to the episode in which Mr. Belding’s hipper, cooler and stewardess-slaying brother, Rod, arrived at Bayside and declared that he was going to take over the school’s big trip. While this led to even more tension between Rod and Richie, Zack took an immense liking to Rod, who then taught a group of teens everything it needed to know about white water rafting in a boat in a classroom over the span of maybe an hour. In the end, Rod bailed on the class trip and Mr. Belding took his place, so it’s safe to assume that some of the students died from not having a certified rafting guide with them.

The Max was the restaurant that all of the students of Bayside spent their time at before, during and after school, because their parents had failed all of them. In this particular episode, the owner of the restaurant – a magician who sucked at finances – revealed that he was in danger of having to close, but he was in luck because Zack and the gang just found the school’s old radio station, which was previously run by Mr. Belding, AKA The Big Bopper*. After they shamed Slater into giving up on his dream of providing hot sports takes, they used the radio station to host a Save the Max rally. Just as everything seemed lost, Slater showed up and overcame his lack of charisma to convince more people to donate money to a failed business.

*Or in this case, the Really Big Bopper.

Hollywood super-duper-star Johnny Dakota, who was cool because he wore a rad jacket and partied with hot babes, picked Bayside High to be the location of a new anti-drugs PSA, and obviously the gang was super-stoked. Zack and Slater couldn’t wait to party with a star, and Kelly immediately fell for his sexy charm and powerful presence. But yo, this ain’t no lie, Hollywood is filled with crummy liars and scumbags, and Johnny was no different. He smoked a doobie in the Bayside bathroom and later tried to get Kelly to taste the pot. Zack’s hero was revealed a false idol, and Johnny was replaced by Mr. Belding’s close friend, NBC executive Brandon Tartikoff. Because if kids are going to be told to not smoke weed, they’re going to listen to the nerdy guy in the suit.

Kristy Barnes was the new girl at Bayside, which explained why the guys went so crazy over her, because there were only five girls in the entire school at any given time. All she wanted was a shot at joining the wrestling team, but that awful Coach Sonski wouldn’t let her… because she’s a girl. EWWWWW! Luckily, because he was crushin’ hard on her, Zack convinced everyone to support Kristy, and she eventually proved her worth to the team. Of course, Jessie was totes jellies of Kristy, but she had nothing to worry about. She’s all the mama that Slater would ever need.

If you want to be upset about certain characters being absent from this reunion – again, Lisa Turtle is no more and Screech has become a menace to society – you could argue that Tori Scott, Violet Bickerstaff or maybe even Rhonda Robistelli deserved an appearance. Hell, why didn’t we check in on School Nurse Jennifer to see what she’s up to now?

However, I’d argue in favor of the twin sisters who got to be in just about every background shot, but never received their time in the sun.

Also, Ox and/or Ollie would have been acceptable.

Perhaps the most recognized moment in any Saved by the Bell conversation, Jessie’s legendary freakout over caffeine pills changed the way children in this country discussed over-the-counter medications. As you can see above, Berkley hasn’t lost any of the acting ability that made her transition from Jessie Spano to a Las Vegas stripper so effortless, but nothing will ever top the original moment.

With an entire website devoted to it, Zack Morris’ brick phone was so cool and ahead of its time that I felt like the biggest loser in my high school with my beeper merely clipped inside my front jeans pocket. But Zack’s phone was more than just a way for him to prank Slater’s pizza with the hottest peppers you can find or pull a fast one on Mr. Belding by having Screech talk like the Micro Machines guy. It helped him finally see eye-to-eye with his father, who was often too busy to realize what truly matters – that his son had become a con artist.

It’s strange that more people weren’t fascinated by Zack’s ability to manipulate time for his own gain. If he could stop things by merely making a timeout gesture and saying, “Timeout!” then why wasn’t he taking advantage of it by robbing banks and humiliating his peers for the sake of making himself look better and getting out of trouble? He could have avoided the entire incident with Jessie’s stepbrother Eric and the crashing of Mrs. Belding’s sweet Mazda Miata (that Eric was later able to fix to factory standards all by himself). In this specific instance, Zack used his spectacular power to avoid being knocked out by Slater. 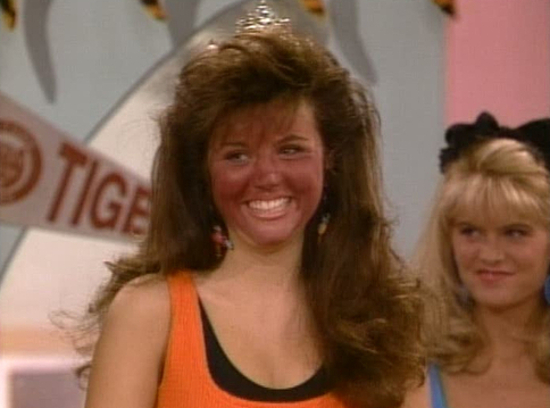 Kelly Kapowski was, of course, the classic TV All-American girl, and that was emphasized by the fact that she was a cheerleader, the homecoming queen, and the steady girlfriend of the coolest kid in school (even if she did leave him for a sexual predator named Jeff, who should be in prison). While the cheerleader uniform could be indicative of any number of episodes, I prefer “Cream for a Day,” because when she made the mistake of using an acne cream that Screech accidentally created in science class (and it was not FDA approved despite working on Crater Face Coburn) Kelly trusted Zack to turn her maroon face into a sign of school spirit. You know, instead of going directly to the hospital and praying to every god in the heavens that it wasn’t permanent.

Slater’s bulge made its most iconic appearance in this episode that had the boys against the girls after Mr. Belding and his wife temporarily separated, and the school’s principal did what any adult would do in his situation – hang out in his teenage students’ bedrooms. Fortunately, Zack and Slater were able to convince Mr. Belding to make up with Becky Belding, and then they had a little making up to do with their respective boos. That included Slater dancing like this for Jessie:

Which Lopez almost flawlessly recreated for this reunion:

The key has always been the “peek-a-boo” move. If he didn’t land that in this Tonight Show reunion, then the whole event could have been ruined.

Perhaps the most bizarre and ridiculous episode of a show that was filled with absurd ideas and stories, “Rockumentary” showed us the future of the gang’s band, Zack Attack, which delivered the smash hit “Friends Forever” to the rest of the world. Here’s to hoping the band reunites for one more tour, even though guitarist and backup singer Lisa Turtle is… you know, and keyboardist Screech Powers is a terrible human being with serious issues that need to be resolved before he can ever be trusted to babysit Hound Dog again.

This is an updated version of an article that ran in February on 2015.