A Guide To Understanding The Terminology Of ‘The League’ On FXX

As we near the end of The League on FXX, it’s time we look back and give thanks to the series for all the new words and phrases the show has introduced into our lives. The fantasy football series has given us its own shorthand that many of us in fantasy football leagues employ in our everyday lives. Through nearly seven seasons of The League, we’ve laughed, we’ve cringed, and we have learned. There’s an entire new universe of language in The League, and each new episode brings us another word or phrase that we can add to our lexicon.

This glossary of terms from The League is not comprehensive — there are too many terms to remember — but it should provide a solid base of understanding for anyone who is passionate about fantasy football smack-talk. Urban Dictionary definitions provided, where available.

AIDSvantage — A sympathy advantage derived from having a disease, such AIDS or cancer.

Anticiperection — When a guy is anticipating getting laid in the very near future, and is so excited about it, the anticipation he’s feeling gives him an erection.

The Brown Note — The brown note is a hypothetical infrasonic frequency that would cause humans to lose control of their bowels due to resonance.

Dick Chicken — A game in which two men who are exposing their penises inch closer and closer until someone their penises touch or someone bails.

Dump Buddies — A friend with whom you can hang out and talk to while you’re doing No. 2.

Eskimo Brother — When two males acknowledge having been intimate with the same female and remain on good terms, the men are now bonded by having shared the same igloo at one time or another.

Fear Boner — When you are so intensely afraid of another individual that you reach a point of sexual arousal. 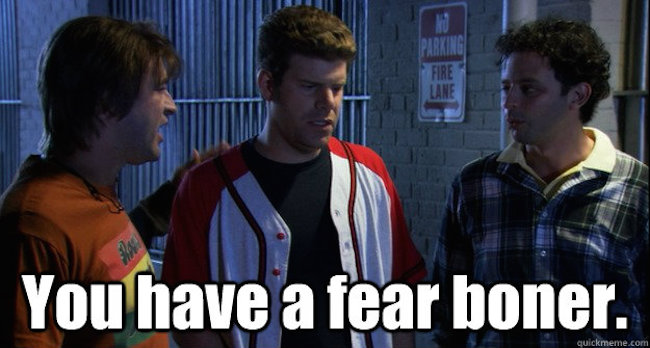 Furtada — Both a noun an adjective, this is a unique term used in lieu of the now politically unacceptable terms “retarded” or “retard.”

Kidney Shifter — Refers to a man who inserts his penis into a woman’s vagina with such force that it shifts her internal organs.

Ratings B*tch — Refers to someone who is incapable of making their own decision or opinion without checking and relying on the ratings of critics, professionals, or analysts.

Rosterbating — The act of pleasuring one’s genitals while thinking of or looking at your fantasy football roster.

Sh*t Sipper — A universal term for jackass, or idiot. Also refers to the act of actually eating sh*t.

Slot Shaming — The act of shaming fantasy league managers who have slot receivers in their starting lineup.

Taccot — An ideal plane of existence where the 12 tribes of Israel come together with people who are high on mushrooms and groove to Aphex Twin.

Three-Penis Wine — A Chinese concoction made of the penis of a deer, a snake, and a dog.

Tit Whiskey — The breastmilk of an intoxicated mother.

Twinkle Tinker — Occupying oneself with a smartphone with one hand while urinating with the other.

Trade Rape — When a completely lopsided trade offer in a fantasy sport is accepted.

Vaginal Hubris — Refers to a woman who is overly proud of her vagina.

Vinegar Strokes — The often odd, varied and bizarre facial expressions a man makes at the point when he is just about to ejaculate, which often resemble the face one makes while smelling vinegar.

Zipper Fairies — Fairies that hide in your zipper and get stuck. Often cited by parents as something with which the mother is searching if she is caught by her children in the act of providing oral sex.

(Via Urban Dictionary and Wikipedia)