‘The Walking Dead’ Gave Us Exactly What We Expected, And Why That’s Rarely A Good Thing

There should be some sort of equation for television that measures expectation and anticipation against the level of satisfaction in an outcome. How would we use that equation to grade this episode of The Walking Dead, “Head’s Up,” which saw the return of Glenn Rhee, alive and well?

Let’s back up a moment: The final seconds of this season’s third episode, “Thank You,” were a high point for the series: It had gone to a very dark, very unexpected, and very brutal place by killing off one of only four remaining cast members from the first season (five if you count Morgan). We were angry that they’d killed off Glenn and sad that one of our favorite characters would no longer be on the series, but it was worth it. The agony and heartbreak offset the loss of Glenn. It was a powerful television moment.

We were right. What’s more, he was able to survive just as most of us had predicted shortly after the episode aired: It was Nicholas who was being ripped apart on top of Glenn, who pulled himself under the dumpster and waited until the walkers vacated the area. 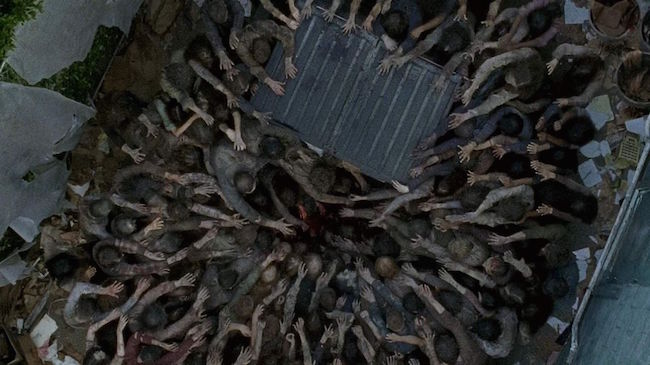 A cheap reveal, however, can be offset by a huge emotional payoff. For instance, The Walking Dead spent half a season walking around and searching for Sophia. In the end, the emotional payoff was worth it when we saw her finally shuffle out of Hershel’s barn and Carol try to run to her daughter before Rick put a bullet in Sophia’s head. That was a devastating moment that made us quickly forget all the walks in the woods we had endured to get there.

In this week’s episode, the emotional payoff came at the end, when Glenn and Enid floated those balloons to the sky, letting Maggie know that Glenn was OK. It was a touching moment, heightened by the manipulative score, but it wasn’t enough to make up for the cheap reveal. Maybe the actual Glenn and Maggie reunion will eventually give us that satisfaction, but on a scale of 1 to 10, the emotional payoff here gets a 6, meaning that the average score for the reveal and payoff combined comes out to around a ho-hum 4.5.

Maybe if Glenn had climbed under the dumpster in the fourth episode — or even better, after a commercial break — we’d never have gotten our expectations built up so high, and we wouldn’t have demanded more than what we witnessed in seeing Glenn slide under the dumpster. However, by waiting four episodes before the reveal, The Walking Dead did a disservice to its fans by giving us such a cheap, anticlimactic out.

Or maybe it’s not the fault of the writers. Maybe it’s the fault of our Internet culture. If clues outside of what had aired on television had not tipped us off before the events of last night, it might have felt like a terrific payoff: A guy we thought was dead four episodes ago miraculously survived! We’d have been ecstatic, or at least pleasantly surprised.

As it stands, however, tonight’s episode was predictable. We’ve been spoiled by five seasons of Breaking Bad and seven season of Mad Men: We want to be outsmarted by the writers, not given exactly what we expect. Tonight, we got exactly what we were expecting, and I can’t help but feel a little disappointed.

Now Watch: Who Is Dwight On ‘The Walking Dead’ And Why Should We Care?