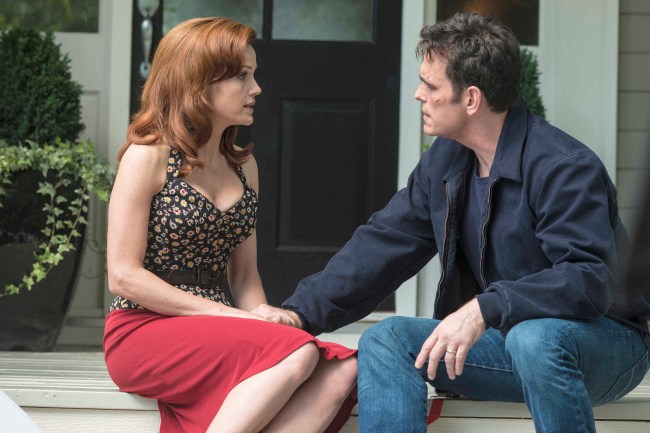 The mystery underlying the FOX series Wayward Pines was revealed this week — midway through the series — and it was a doozey worthy of the earlier work of its producer, M. Night Shyamalan.

After spending days (or weeks) attempting to escape Wayward Pines, Secret Service Agent Ethan Burke (Matt Dillon) finally managed to climb atop a cliff and travel away from the city. Outside, he soon discovered that Boise, Idaho, didn’t look right. In fact, the architect of Wayward Pines, David Pilcher, soon revealed that Boise, Idaho — and the rest of human civilization — no longer existed.

As Megan Fisher (Hope Davis) explained to Ben Burke (Charlie Talahan), humans had actually devolved far beyond what was predicted in Idiocracy and into ravenous, predatory creatures (must have been all the Mountain Dew). It’s been 2000 years since the people of Wayward Pines were involved in car crashes and put into a state of suspended animation. Waking up two millenia later, they are the last humans on Earth, and they are all tucked away in a small city protected from the outside world.

Wayward Pines isn’t Twin Peaks. It’s The Village in reverse, only there is not a modern civilization outside of its walls. There’s instead an apocalyptic hellscape dominated by devolved humanoids.

Here’s a few I have:

— I actually thought it was a nifty, unexpected twist (and much much better than the alternative).

— That said, knowing what we know now, the motivations of the townspeople make very little sense. Assuming that none of the adults knew the twist, including Terrence Howard’s Sheriff Pope, then why did they act in the manner they did? Why aren’t the citizens — and leaders — of Wayward Pines more questioning of authority? Why did Pope make a creepy pass at Ethan’s wife? Why is Nurse Pam (Melissa Leo) so shady and villainous (she’s been very good in the role, nonetheless).

— Wouldn’t it have been much easier just to explain to the citizens the circumstances and take their chances with the occasional adult losing his mind over it rather than risk everyone losing their mind living in a fascist utopia in which no information is parceled out? I mean, Megan Fisher — the teacher — didn’t go crazy when she found out. Is there more truth to be revealed?

— Why did Pilcher choose a bunch of morons to be the last humans on Earth? Shouldn’t he have, like, chosen scientists, agriculturalists and construction workers?

— I haven’t yet gone back to rewatch earlier episodes, and maybe I’m wrong, but it certainly seems like David Pilcher managed to cross timelines. How was he able to simultaneously communicate with people in both the present and the future? He was still talking to Burke’s colleagues in the present and getting updates on Burke’s status 2000 years in the future, right? I guess some of those scenes were flashbacks and we didn’t realize it? Nevertheless, I feel like there are some timeline inconsistencies that haven’t been well explained.

— If the “children” were the most important element of Wayward Pines, then why did they bring in people like Beverly (Juliette Lewis), Peter (Justin Kirk) and even Kate (Carla Gugino) if they were single and childless and/or they didn’t also bring in their children? It’s not like Kate otherwise seemed integral to the town. She was a Secret Service agent, and now they’re using her as a cashier at a toy store? That seems like a waste of her talents. Also, her AND Burke’s skills are in investigations. Aren’t they the exact opposite of the kind of people they want if they want the truth to remain a secret?

— In fact, the more you think about it, the more things about the town — and the people chosen — don’t make sense in light of the reveal, unless there is an additional reveal that will make sense of the earlier episodes.

— If there are so few people already, why kill them for breaking these rules? How many more people do they have stocked in suspended animation?

— Notwithstanding the disastrous effects of corn syrup and reality television, 2000 years is an awfully short amount of time for the entire human race to devolve into creepy humanoids with talons. What? Were we f*cking birds back in 2050? Or was that part of the genetic engineering? Were they crossbreeding us with birds? Did we devolve because of genetic experiments that went awry?

— Was Pilcher somehow involved in the “de-evolution?” Did he actually engineer the apocalypse so that he could raise his own cult? Because that would be supremely f*cked up.

In sum, cool twist, but there’s definitely a lot of unanswered questions and inconsistencies. More importantly, with five episodes to go, and the twist already revealed, where the hell do they go from here over the course of the rest of the series?

We’ll find out when Wayward Pines returns in two weeks.