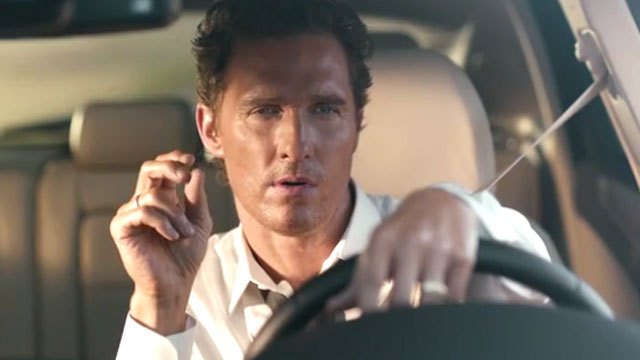 Matthew McConaughey’s weird, peak McConaughey Lincoln commercials have been parodied by everyone from Jim Carrey and Saturday Night Live to Tommy Chong to this very website, but if you’re wondering if the man himself has been sitting in front of his laptop taking them all in, the answer is a definitive “nope.”

Vanity Fair caught up with him at an event for his just keep livin’ Foundation (capitalization joyride his, not mine) and found out that the only one he’s seen is the one Ellen DeGeneres did, and that was because she personally showed it to him. He hasn’t even seen the Jim Carrey one (“I hear it was funny”), and that sucker was everywhere. It’s almost a miracle he didn’t see it by accident.

But the best part came later.

We asked if there was anyone who hadn’t yet done a spoof of the spots who he would like to see perform one, and McConaughey had some excellent ideas. “I don’t know if the South Park guys took their turn, but they’ve jacked with me to aplomb in the past,” he says. “Or maybe [Matt] Damon will take a shot. He does a good McConaughey.”

One, I really recommend trying to say the phrase “they’ve jacked me to aplomb” in your best version of McConaughey’s signature drawl. Do it out loud. Trust me on this.