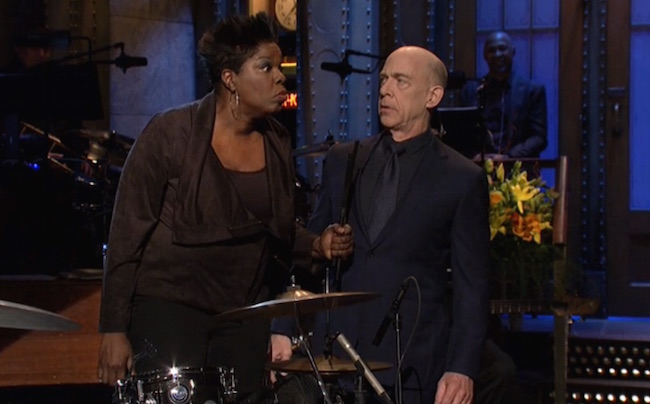 Last night was Saturday Night Live’s third show in a row – which, in itself, isn’t anything too terribly unique – but it’s also just two weeks away from the 40th anniversary show. So, what we have is this J.K. Simmons-hosted episode being caught in-between the end of a cycle (people are tired) and the biggest event in the show’s history (people are starting to think about that). The point: there’s a lot going on and what we saw last night was a fairly serviceable show (outside of a truly great D’Angelo performance) that maybe should have been a little better, considering the host is a great actor and probably could do almost anything. But, if there is a time to give SNL a pass, it’s probably right now. From everything I’ve heard and seen with my own eyes, the upcoming 40th anniversary show is going to be a monster of an event. Anyway in the meantime, let’s just get by with this week’s scorecard…

“The Jay Z Story” (O’Brien, Killam, Sudeikis, Simmons, Pharoah) Mike O’Brien really is doing some interesting work right now – he’s truly become the Albert Brooks short filmmaker that even Albert Brooks couldn’t pull off. (Go back and watch a few of those Albert Brooks shorts from the first season, there’s a reason they didn’t last. One of them is just Brooks lying in bed in his apartment complaining that he was still contractually obligated to turn something in.) Here, O’Brien plays Jay-Z, which is just about as wonderful and weird as it sounds. (And it’s about time someone finally made the J and Z subway line joke, because I think about that all the time.) I do wish SNL would put O’Brien back in the opening credits with an “And a film by Mike O’Brien,” or something (like they did with Robert Smigel’s “TV Funhouse”) because O’Brien’s work is at least as important as everyone else’s in the main cast right now.

“Casablanca” (Simmons, McKinnon, Thompson, Killam) Boy, how great was J.K. Simmons playing Humphrey Bogart playing Rick Blaine? Honestly, this is what I’m talking about. J.K. Simmons is such a great actor — why weren’t there more sketches like this? And Kate McKinnon – one of America’s newest Ghostbusters — was outstanding as a skittish Ilsa who just desperately wants to get on that plane.

“Totino’s Super Bowl” (Bayer, Simmons, Moynihan, Pharoah, Bennett) Vanessa Bayer has the rare talent of being able to be seemingly sweet and viciously scathing at the exact same time.

“Weekend Update” (Jost, Che, Strong, Killam) Both Colin Jost and Michael Che got off to rough starts, but eventually recovered – and Che is becoming increasingly good at delivering biting monologues. Cecily Strong’s One Dimensional Female Character was better this time. The first time, it felt like every joke was straight out of Not Another Teen Movie. This time, it felt like there were just more original things to say – the line about the stainless steel refrigerator was pretty inspired. And Taran Killam’s Jebidiah Atkinson has peaked. I mean this in a good way – it’s peaked right now. Killam owns the room while playing Atkinson and it’s the closest thing “Update” has to a Stefon right now.

“Cold Open: Super Bowl Shut Down” (Pharoah, Thompson, Killam Ensemble) I kind of wish Jay Pharoah could play Richard Sherman anytime of the year, not just the night before the Super Bowl, because Pharoah does a pretty great Richard Sherman. This felt like the first installment of a recurring sketch that won’t become a recurring sketch – in that it was rough around the edges, but has a lot of future potential, but we probably will never see it again.

“Microsoft Assistant” (Simmons, Bryant, Moynihan) This almost felt like a sketch from 15 years ago – I mean, who in 2015 writes a letter to a friend on Microsoft Word? But, who cares? Watching Bobby Moynihan dance around in a thumbtack costume is timeless. (What a weird sentence!) Anyway, I’m glad J.K. Simmons didn’t murder Pushie.

“J.K. Simmons Monologue” (Simmons, Mooney, Bryant, Davidson, Jones, Armisen) There was little doubt that there would be some play on Simmons’ soon-to-be Oscar winning performance in Whiplash. Did it have to be drums? Maybe it had to be drums. It just seems like there could have been something else they could have done, but I guess someone wanted to prove to us that Fred Armisen is a good drummer. (Also: It’s impossible for Leslie Jones – another one of America’s newest Ghostbusters — not to be funny.)

“Miss Trash 2015” (Simmons, Bryant, Strong, McKinnon, Bayer) For the life of me, I’m not sure what this was about. When it first started and the title credits of “Miss Trash” popped up, I remember thinking, Hoo boy, here comes something pretty scathing. And then it wasn’t, instead it was just people doing sort of Southern accents — with the joke being that one contestant thought this was Miss America. With the people involved, this just seemed like a wasted opportunity.

“Career Day” (Simmons, Davidson, Strong, Mooney, Zamata, Bryant, Moynihan) As a 10 to 1 sketch, at least this was super weird. I’m actually surprised this made it to the live show because the crowd was not into this at all. I will never think a sketch is too weird – the Potato Chip sketch with Forte and Sudeikis is still one of my favorite things – but there was just no payoff to the weirdness. This guy really did just eat sloppy food for the pleasure of Japanese busineswosmen. (Even though I didn’t like this sketch, I would read an oral history of its conception.)

“Teacher Snow Day” (Moynihan, Strong, Thompson, Jones, Mooney, Pharoah, Davidson, Zamata, McKinnon, Bryant, Simmons) Everything about this came off as lazy, even though the production values were great. Honestly, there’s absolutely no substance here. It certainly looks like stuff that SNL has done in the past that is good, but this really does come off as “let’s do something where we rap and dance around, I bet the Internet will eat it up.” I fear this will became some sort of default setting of, “Let’s make a viral video even though we really don’t have a good idea.”