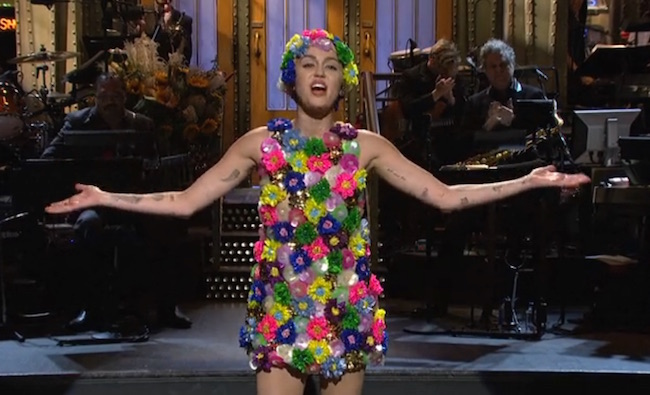 Miley Cyrus thanking her dead pets (or “petz,” if we must) at the end of the 41st season premiere of Saturday Night Live seemed strangely appropriate. At that point, sure, why not? I don’t begrudge SNL for tapping someone like Cyrus to host – the balance between great host and great ratings draw has always been something the show considers, for better or worse – but she’s not a particularly good host. (And she’s really sticking to that “I’m so edgy, just ask me” mantra to the point she delivered a “I smoke pot” joke on cue. She has mastered the art of “predictable edge.”)

I’ve already seen people saying things like “but they had all summer,” in response last night’s, let’s say, slow start. But the show doesn’t work like that. They have the same amount of time to prepare this week as they do any week, only they’ve all been off for four months and there are new writers and a new cast member. SNL is usually at its best after its been warmed up, but not driven so far to the point of exhaustion. And it will get there! It always does! And it might be next week with Amy Schumer hosting! Or the week after, when Tracy Morgan returns!

But, right now, we just have last night.

So, for the sixth time, here is your first Scorecard of the season:

(Disclaimer: No matter the quality of a particular show, it’s always a minor miracle that the people involved with SNL pull this off on a weekly basis.)

“Katz’s Deli” (Strong, Jones, Cyrus, Bayer, Rudnitsky, McKinnon) Leslie Jones is last night’s MVP. She tried her best to save this particular show! I don’t have any idea how they can bring the “the condom broke” orgasm character back, but I hope they figure out a way. Leslie Jones is a treasure.

“Miley Wedding” (Mooney, Bennett, Cyrus, Moynihan, Pharoah, Rudnitsky) As discussed below, the “American Voices” sketch bled straight into this one, giving this a bizarre start. Anyway, whatever, by this point in the night I was ready for some Kyle Mooney madness and this is Kyle Mooney madness. I’m sad that Kyle Mooney dies at the end of this sketch, but if he had to be sacrificed to help try and save an off show like this one, well, so be it. We all make sacrifices. RIP, Kyle Mooney.

“Hillary Clinton Bar Talk” (McKinnon, Clinton, Strong, Killam, Hammond)When Kate McKinnon, as Clinton, and Hillary Clinton, as a bartender, had a back and forth about gay marriage it felt like a true moment. And McKinnon pulled this off with such dexterity that it felt unrehearsed and not too “wink wink.” (Who knows, maybe the line was added late and wasn’t really rehearsed much, because it felt fresh.) The case could be made it’s a little early for a real Hillary walk-on. We are still getting to know McKinnon’s interpretation of Clinton and these kind of things have a way of changing the direction of these interpretations. Regardless, this sketch was interesting.

“The Squad” (Bayer, Bryant, Bennett, Thompson, Killam) “Directed by Alfonso Cuarón” made me do a legitimate laugh-out-loud (which were lacking on this night, sadly). This was … just weird enough to be good. And Vanessa Bayer and Aidy Bryant probably could star in a drama about the end of the world and it would be pretty great. I do wonder what Miley Cyrus thought about a sketch in which Taylor Swift is so popular it brings about the apocalypse – right before Cyrus goes on stage with pictures of her dead pets on a piano. Good grief, what a weird night. (The Cyrus family did seem to own a very handsome cat.)

“Miley Cyrus Monologue” (Cyrus, Ensemble) Miley Cyrus smokes pot. After we got that out of the way, this turned out to be a pretty clever monologue. And it probably had to be a little bittersweet, watching all of these cultural events that the show missed out on covering, especially ending a week when the real news was particularly grim.

“Abilify for Candidates” (Cyrus, Bennett, McKinnin, Moynihan, Thompson, Killam, Strong) This is a clever idea, but it just wasn’t that funny to watch play out. It’s one of those things that’s funnier to just say, “Hey, what if there were a pill that would make a presidential candidate wake up and realize he or she has no chance of winning?” Watching the testimonials of that pill just didn’t have enough oomph.

“Weekend Update” (Jost, Che, Mooney, Davidson, Jones) Leslie Jones did her best to save “Update,” but it wasn’t meant to be. Both Colin Jost and Michael Che seemed strangely sedated – to the point that even Leslie Jones couldn’t get the reactions out of Jost that she usually does. I mean, she literally told him she wanted to have sex with him. This kind of thing always turns Jost into a blushing, blubbering mess, but not last night for some reason. I have no explanation. Kyle Mooney’s Pope Francis sounds nothing like the real Pope Francis and I don’t care. And, look, I enjoy Pete Davidson, but even his bit seemed a bit off. He’s got such a gift for delivery, but his “I don’t know anything about anything” shtick is going to get tired, especially when it involves jokes about how women don’t understand football.

“American Voices” (Jones, Zamata, Thonpson, Cyrus, Strong, Pharoah) It’s a shame, technical issues may have killed this sketch. They should try this one again because this is a great concept that could go a lot of places. I’m not sure where it went last night live up to its full potential. Again, it’s tough, because this sketch had no ending. And not in the old “SNL doesn’t know how to end a sketch” trope, but it literally bled into a scene of Miley Cyrus and Kyle Mooney getting married.

“Cold Open: Donald and Melania Trump” (Killam, Strong) There was no way expectations could be met for the first Trump sketch of the season. But even being fully aware of that, this was a disappointment. It felt like some sort of compromise between a few ideas and it didn’t work. Look, it’s tough: Trump hasn’t really done anything outrageous recently. The debates would seem dated. They could have done something on his 60 Minutes interview, but for whatever reason, they didn’t. So we got this, which was basically a summary of his “greatest hits” and it felt really flat. The good news is, Taran Killam does a pretty solid Trump! The better news is that Killam’s Trump will keep getting better!

“’50s Dance” (Killam, Rudnitsky, Mooney, McKinnon, Strong, Cyrus, Thompson) I really liked where this was going until the punchline. The set looked great, the ‘50s vibe had a lot of energy, the cast seemed really into the whole thing: and then it turned into another way to show that Miley Cyrus is edgy. The thing is, this sketch might have worked with another host. But it was just so on the nose with Cyrus that the whole thing fell apart.

“Millennials” (Killam, McKinnon, Davidson, Cyrus, Thompson, Rudnitsky) Maybe they take another crack at this one? It just seemed like “Here’s every lazy stereotype about Millennials, funny, huh?” And as a member of the “Hey, we happened, too,” Gen X, I love a good Millennial joke … this just wasn’t it.