UPROXX Investigates: A Look At The Third Episode Of Comedy Central’s ‘Big Time In Hollywood, FL’

By the end of the second episode of Comedy Central’s Big Time In Hollywood, FL, Ben [Lenny Jacobson] is sent off to rehab, and Jack [Alex Anfanger] is sent off to a single-studio apartment. Episode three picks up with a Shawshank Redemption opening, as Ben reads a somber letter from Jack. He delicately describes his new job bagging groceries and the struggles of being dependent–how perhaps it’s not worth living any more. Then he hangs himself. But it turns out the letter was for another Ben, who cheerfully asks if anyone has seen a letter from his brother.

Rehab is a nightmare for Jack, who spends his day listening to fellow patients talk about smoking crack out of human skulls. When he’s harassed in the bathroom by a woman forcing him to pee in her hand, he knows he has entered Hell. Jack pays him a visit and is immensely jealous, seeing the place as a magical dream. You get to wear pajamas, the TV is on all day, and you take naps in the middle of the afternoon. He’ll do whatever it takes to join him.

Meanwhile, Diana [Kathy Baker] wants to find out more about Del [Jon Bass], the supposed culprit to Jack’s drug addiction. She hires Private Investigator Harvey Scoles [Michael Madsen], despite her husband Alan [Stephen Tobolowsky] thinking the idea is “bullspit.” She meets with Harvey, who begins investigating Del, while Alan does something he sees as more worthwhile–purchase a car for Jack.

While Alan is being a usual mensch towards his ungrateful son, Jack is convincing Del to go to the worst part of town to buy him drugs, so he can overdose and join Ben in rehab. The plan works, amazingly, but not without PI Harvey catching Del in the act of the drug deal and Jack turning into a werewolf like creature and destroying his new car.

The show’s creators and writers, Anfanger and Dan Schimpf, [who spoke with us previously about the making of their show and the stories behind episode one and two] talk us through the inner-workings of episode three and what we can expect in future episodes. 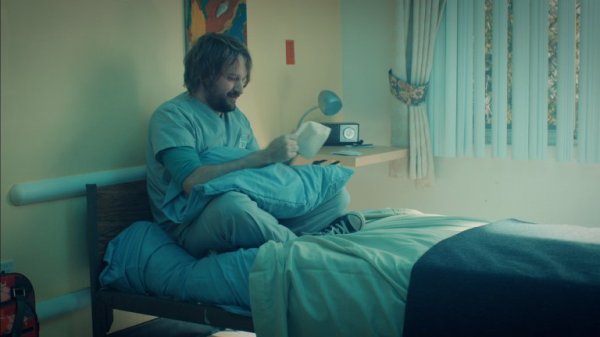 DAN SCHIMPF: Jack pictures rehab as this place where celebrities go to hang out and it’s this life of luxury.

ALEX ANFANGER: Jack is just completely delusional, but he views having to be alone and taking care of himself in his apartment as a way darker prison cell than even the drab rehab.

SCHIMPF: The boys have grown up in this coddled, specific world their whole life. Part of the trajectory of the show is heavy doses of reality all the time. Rehab speaks to that. Jack thinks of it as a sexy sort of thing and it is both literally and figuratively a nightmare for Ben.

SCHIMPF: That’s something that attracted us–this slow, nightmarish hell hole that Ben’s life turns into. He’s basically trying to sacrifice telling the truth and goes through this intense hellish nightmare to protect the lie that he is addicted to drugs. We had a lot of fun with that, these themes, of Ben being left alone in this world that’s very uncomfortable and Jack viewing it as his end game life scenario. It made for a fun juxtaposition.

ANFANGER: When we’re writing we’re always looking for the choices and the things that surprise us, that make us laugh. Also, in three, it serves the horror element to that episode pretty well.

SCHIMPF: The big theme for episode three is the horror of it all. From the end of three is where the main plot of the rest of the season really kicks into high gear.

ANFANGER: [The character] Ted [Lee Schall], he’s also the guy in the first episode who is telling the story about how he hit his niece with a car. He’s a reoccurring fun character that we keep bringing back that we really like. He has a fun payoff in the end. That’s also a character we just love. We booked him on something on our web show and he just walked in and auditioned for this tiny role and he’s just one of the funniest natural characters I’ve ever met. So we tailored this role for him that’s just the town maniac basically. He is very sweet by nature.

ANFANGER: Yes. This disheveled, Woody Allen type that becomes the frame for Hollywood, Florida’s most deviant human being.

Getting Swindled at Hand Shake Auto

ANFANGER: We had the idea that Alan goes to the dealership and he just gets completely hosed by the dealer. So when we brought that to the writer’s room, one of our writers just had the idea that the reoccurring motif for this shit-head dealer is that he keeps constantly saying, “I’m going to talk to my manager,” and then he does whatever the hell he wants to do. Then you find out that the whole dealership, that’s all they do. Anyone who has ever bought a car know what it’s like to go to a dealership. It’s like purgatory.

SCHIMPF: I feel like we wrote more material for that scene than anything else in the show.

ANFANGER: A lot of stuff was cut from that.

SCHIMPF: That could be a whole other TV show, just centering around a car dealership who just hoses people day after day. It was a lot of fun. Everybody seems to be having the worst day in that episode. And the car becomes a big piece of the puzzle for the rest of the season. At the end of the episode the car gets eventually destroyed and becomes a fun plot point later on of all their experience, so it was fun to learn where it came from and make a bigger deal out of it.

The Authenticity of a Drug Deal

ANFANGER: We shot that downtown [Los Angeles] in real Skid Row. It was actually surprisingly scary and, for some reason, we had to shoot it there because we were shooting something else.

SCHIMPF: We slugged it—when you slug where the setting is, it said, “Exterior: skid row, Del buys drugs.” We were shooting downtown and our location manager took it literally and had a location on the actual Skid Row. It fit the part and we had to do it. We had an aggressive schedule and we were right there. Los Angeles kind of offers many opportunities to double Hollywood. But we would really like to shoot in Hollywood, Florida next season.

ANFANGER: It was really funny, Jon and Jack’s interaction was hilarious. And when he calls him the little bitch, it makes me laugh. Such a funny interaction.

SCHIMPF: [It’s] positioning the thrust of what happens next. Because now Michael Madsen’s character, Harvey Scoles the Private Investigator, thinks that Del is actually linked to the drugs that confirms Diana’s suspicions and kicks it into a high gear of the misunderstandings and miscommunication that lead to a greater expansive plot. That’s a really difficult moment I would say. Michael Madsen bringing the gravity to that role makes it feel cooler and more distinct and realer in a way. But that’s what we thought was so funny, he’s not doing a bit. He’s just very unpredictable. And with cinema being a theme in the show, in a way that’s why we thought that bigger movie actors help populate this world a bit better. On a meta level it feels more cinematic when somebody like Michael Madsen is in that role.

ANFANGER: One of my favorite images of the show is just the fact that [Madsen] takes a picture of him right after he buys drugs. When Del lifts it into the light to check it is just the greatest thing that Bass does there. Staring at that bag of drugs.

The Future Is Cuba

In forthcoming episodes Cuba Gooding Jr. plays a vital role. Anfanger and Schimpf offer some insight on what we can expect from Cuba in future episodes.

SCHIMPF: We wrote this character, [and] he’s a maniac. So then we were tasked with, okay, who would be really funny and fun to have as a total lunatic? As we were writing the season that role kept expanding and kept getting much more important. Cuba is a brilliant dramatic actor, he’s won an Academy Award—which is amazing that he’s a main character of the show—but understands comedy. That was a fun balance.

ANFANGER: There’s a manic amazing energy that he carries with him constantly. To bend that to a dark place also was just really exciting.

SCHIMPF: He has such an endearing quality to him in real life we you meet him he is very soft and welcoming—pretty much the opposite of the character he plays on the show.

ANFANGER: We still had to fight for it.

SCHIMPF: He really liked the pilot, he really thought it was funny. But when he saw that the character description was Cuba Gooding Jr. playing basically the most insane human being…

ANFANGER: So he didn’t really want to do it. And he said that he wanted to do the show but that he didn’t want to play Cuba Gooding Jr. as that role. And we asked, is there anyway we could meet with him? If he’s in any way interested let us sit down and talk to him and we can work something out. If he really wants us to change it, or at the very least we can plead our case.

SCHIMPF: When we went to meet him the thing he thought originally, before we explained the part to him, was Cuba Gooding Jr. making a cameo doing something ridiculous. His apprehension initially was you see actors make that brief cameo and then bounce in and bounce out. When Alex and I explained to him the depth and the insanity, that this is a real character that you’re playing […] There will be no misunderstanding that this is not Cuba Gooding Jr. that you’re watching. You’re watching a very strong character.

ANFANGER: Cuba actually improvised a lot, and was incredible. And then would immediately go, “Yeah, I have no idea what the fuck I just said.” He would blackout, improv something brilliant, and then we’d be like, “Great, we got it.”

SCHIMPF: He wanted to be in that character’s mindset, and the dialogue, to him, was a lot less important. From my perspective when you see that in an actor, and obviously I trust somebody like Cuba Gooding Jr. as an actor, you just let them figure it out and bring something that I thought was better than whatever was written for him. He just understood what we were going for and what we wanted from that character. And he added a lot of dimension and depth and worked a lot on instinct. His instincts were very strong and very funny and very true. We were shocked at how into the role he was.