Comedians On Curbs With Cameras: Why Late Night Hosts Talk To Regular Folks 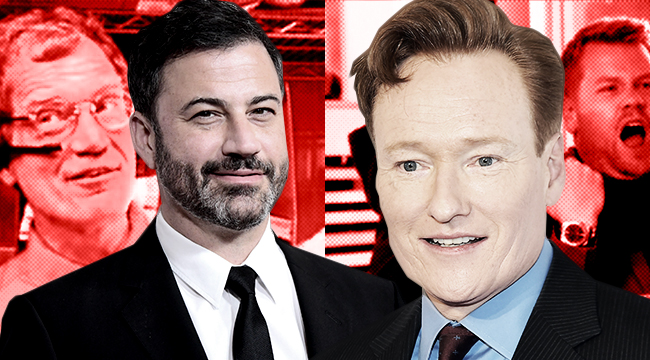 Thank Steve Allen. Or maybe blame him. When the wry, bespectacled comedian launched The Tonight Show on NBC in 1954, one of his first and most reliable bits of shtick was to take his cameras right outside the Hudson Theatre on Broadway, to talk to whomever he happened to meet. Allen was responsible for a lot of what’s become the standard for late-night talk shows: from the monologue to the desk to the wacky stunts. But his most enduring idea was also his simplest. By just letting ordinary people talk — unscripted — he showed off how quick-witted he could be, responding to them spontaneously.

But while the basic idea of late-night comedians chit-chatting with “the common man” can be traced back to Allen, the methods and motivations vary from comic to comic — sometimes subtly, sometimes radically. Last month, Hulu debuted I Love You, America with Sarah Silverman, a quasi-experimental talk show which is anchored each week by a field piece wherein the host ventures into middle America to talk to folks whose politics differ radically from her own. In Silverman’s case though, “talking” looks a lot more like “listening,” since her stated goal with this show is to encourage her audience to start seeing their ideological opposites as people, not enemies. She’s not there to make fun.

What is it about conversing with the non-famous that’s proved so enduring in late-night for over 60 years? And how have different hosts shaped the bit to fit their own personalities and comic sensibilities? Perhaps it has something to do with the versatility of the concept. Here’s just some of what the “man on the street” routine allows:

“Being funny” is typically the top item in the late-night talk show job description, although roughly 75% of any given episode of Late Night, The Late Show or any of their competition has little to do with how sharp the host is. The monologue’s written on cue cards. The sketches are mostly scripted. The interviews are meant to make the guests look good. Steve Allen — an entertainer not exactly renowned for his humility — realized very early in his Tonight Show run that he needed to create opportunities to showcase his remarkable knack for ad-libs. Ever since, the “heading into the audience” or “doing a field report” segments have been a comfort zone for a lot of comedians who were hired for their ability to think on their feet.

Conan O’Brien is probably the best modern inheritor of the Allen legacy. When NBC signed him to replace David Letterman on Late Night in 1993, network executives talked about how he was one of the most naturally funny people who’d auditioned for the gig — something which didn’t really come across in his first few months behind the desk. He hit his stride once he found ways to be looser and more spontaneous. These days on Conan, O’Brien is the best in the business at confidently jumping into an unsuspecting crowd and disarming them with jokes about everything from what they’re wearing to his own ridiculousness.

Part of the reason why Conan O’Brien does so well when he hits the road is that it allows him to describe the world the way he sees it: deeply silly. In that way he’s a lot like David Letterman, who produced some of his most popular comic bits on Late Night and The Late Show whenever he’d spent a day working at a fast-food drive-thru window, of he’d perform some similar stun that had him dealing with regular people on their home turf. He often made it his mission to make their day a little stranger — or even more irritating.

Toward the end of Letterman’s late-night career, cultural critics tried to pinpoint what exactly made him unique among his peers. His “on the street” sketches are a good place to start. In his stand-up days, the core of Letterman’s act was his fascination with language, and how advertisers, authority figures, and showbiz phonies alike use empty hype-words. He’d repeat those phrases in a dispassionate voice — like, “You know ‘em, you love ‘em, you can’t live without ‘em,” and, “This is only an exhibition, not a competition… please, no wagering” — to expose their absurdity. That became the basis of his patter when interacting with real people on camera. He’d drop into overwrought pitch-speak, as though he’d been trained by Madison Avenue to believe that’s how everybody talks.

What made Johnny Carson such a beloved television personality for decades was how he radiated calm. Whatever was going on at The Tonight Show (or in his personal life) behind the scenes, on camera he had his hands in his pockets, his voice was mellow and measured, and he seemed completely in control without coming off as mean or demanding. That said, one of Carson’s most reliable laugh-getters came after something unexpected happened during a taping — like a joke bombing, or a visiting zoo animal startling him — and he’d respond either with eruptive laughter or a Jack Benny deadpan stare. The Tonight Show’s producers would often try to manufacture those moments, by putting him in situations with children or the elderly… anyone with no filter, who’d generate real surprise.

James Corden doesn’t have a lot in common with Carson, but he does seem at his most natural and likable on The Late Late Show whenever he legitimately doesn’t know what’s going to happen. His field pieces tend to involve him trying to create moments of wonder and magic in unexpected places — like a Starbucks, or in the middle of the street — where he finds that meticulous planning can only carry him so far. Patrons and passersby ultimately shape what ends up on screen.

Though he’s lately become a hero to political progressives for taking on the Republicans’ health care overhaul, Jimmy Kimmel is still in a lot of ways the same guy who once co-hosted The Man Show. He likes pranks, especially if they have an edge of cruelty, or they make their victims look stupid. (That’s not meant as a knock. Meanness can be hilarious.) Jimmy Kimmel Live!’s street interviews — like The Tonight Show’s in the Jay Leno era — are almost exclusively intended to reveal how little the average American actually knows about politics, geography, the law, or whatever else they pontificate about on a daily basis. To put a positive spin on these segments, one could argue that they’re the grain of salt to add to any populist’s message about the common man’s innate intelligence.

They’re also — of course — another swipe from Steve Allen, who once did a famous man-on-the-street routine where he got older conservative whites to admit that they’d never vote for a politician who was “an admitted heterosexual.” That same “jeez, people are dumb” cynicism can seep into The Daily Show and Full Frontal, which typically devote about a third of any episode to field pieces that frame nearly anyone with strong political convictions as a clown. Sarah Silverman’s show so far has been acting as a corrective to that attitude of superiority, which has its merits, but tends to leave a sour aftertaste.

Not to get all sentimental, but while most “comedians on curbs with cameras” segments are designed to make the TV star look good, some are also about celebrating the best in all of us. Johnny Carson rarely left his Burbank studio, but whenever his bookers brought him an adorable kid or an eccentric oldster, he did his best to make them feel as important as any movie actor or chart-topping singer — and he seemed to genuinely believe they were. He signaled to his audience that they mattered to him.

While he wouldn’t ordinarily win any prizes for warmth, David Letterman on The Late Show also seemed absolutely delighted when he could turn the spotlight on anyone who wasn’t showbiz-trained. He always looked to be having a ball joking with young people who’d won science fairs, or taking his cameras around the Ed Sullivan Theater to catch up with his “neighbors” working at the delis, gift shops, and strip clubs.

The knock against most late night shows is that they’re formulaic; and it’s true that contriving circumstances where hosts hear from the vox populi is one of those formulas. Think of it this way, though: We know what celebrities look like, and we know what they’re likely to say when they’re sitting opposite Stephen or Seth or any of the Jimmys. But everybody has a story. It’s one of the purest acts of faith on television for comedians to pick someone at random off the street, certain that they’ll be entertaining.