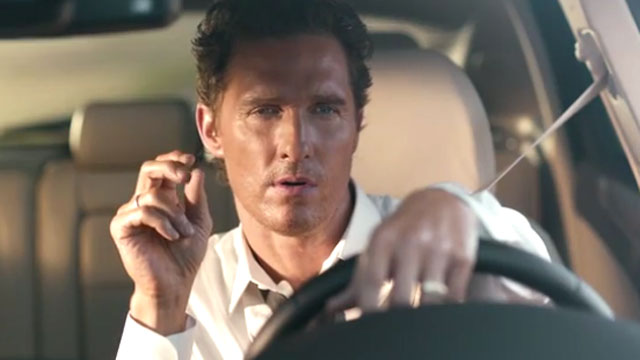 Matthew McConaughey is our nation’s greatest pitchman. That’s been my takeaway from his commercials for Lincoln. I barely have any idea what he’s talking about, but hot damn do I spend a lot of time thinking about Lincolns now. I’ve probably thought about Lincolns more in the past few months that I did in the last two decades combined. There’s just something about short bursts of his loopy mysticism that gets to me. I wish he could do commercials for more products. Possibly every product. Just to see what would happen. And so, that’s what we’re going to do here. A little thought experiment.

NOTE: This only works if you read each one out loud — quietly, if you’re at your desk — in your best slow McConaughey drawl. Very, very slow. Toss out a few “all rights” to warm up. You’ll get it.

“Earth don’t wait for nobody. Just keeps spinning, revolving around that big yellow ball of gas. Time. That’s what it’s all about. We’ll all be dust in 1000 years and the Earth will still be spinning and revolving. Gotta pack a lot of living into our brief time on this blue marble. One meal, one bowl. More time to live.”

“Man’s best friend. Would you feed your best friend dog food? I would. I’ve eaten dog food once or twice. Figured it was only fair. Sustenance. Proteins. Eat what the big dog eats. Yeah, well you’re the big dog now, kemosabe.”

[just kind of whistles and makes strange fluttery hand gestures — very intensely, like he’s trying to explain something important — until a graphic that says “Office Max” pops up on the screen]

“When I was 14 a shaman handed me a peace pipe and told me I’d be dead by 55. Didn’t explain it. I didn’t ask him to. You don’t question the universe. You just gotta enjoy the ride till it comes to a stop and the safety bar pops up. Pop. Time to get off. I’ll be 55 when I go. Maybe you’ll be older. Maybe you’ll want to live with your kind as the ride winds down. Travel in packs. There’s a place for that.”

“The human experience is defined by connections. The links … [interlocks fingers, stares at them for 10 full seconds] … between us. Technology makes that easier, flattens the world. The World Wide Web. All of us tangled up in it, fighting, struggling. eHarmony. E. Harmony. E … everything. Everything in harmony. Connections. It’s a beautiful thing.”

“I’ve been to Tenochtitlan, seen the ruins. Listened to the ruins, too. Learned their lessons, the mysteries they hold. Spent the night in an Aztec burial ground. Breathed the air. Taken that history, that power, into my lungs, and … [takes deep breath] … exhaled. We know so little about the past, and even less about the future. Cortes is coming for all of us one day. We must plan ahead.”

RED M&M: Hey Matt, you going to the party tonight?

MCCONAUGHEY: Whole world’s a party, Candyman. We’re all invited. Drink the punch, nibble on some hors d’oeuvre, chat up a señorita or two. That’s all we’re doing out here. Me? I’m gonna grab a cocktail and have a seat at the piano. Tickle the ivories. That’s my kinda shindig.

“They say choosy moms choose JIF. I’ve never bought into that. The mother-child bond — the maternal instinct — is so strong. There’s no need to be a choosy mom. Let the kid make his own choices. He’ll pick the JIF on his own if you taught him well. If not, he’ll learn. But either way, he’ll be free.”

“A-ha! Yes! The beast! The passion! Look in his eyes. You see that carnal instinct, that animal rage? We all have these primal desires inside us. Let yours out. Roar! Like a mighty jungle cat! It’s not too late. It’s never too late. Feel the blood rushing through your veins. Tiny rivers of life-affirming vitality.”