FIDLAR, Hot Chip And The Best New Songs And Videos You Missed This Week 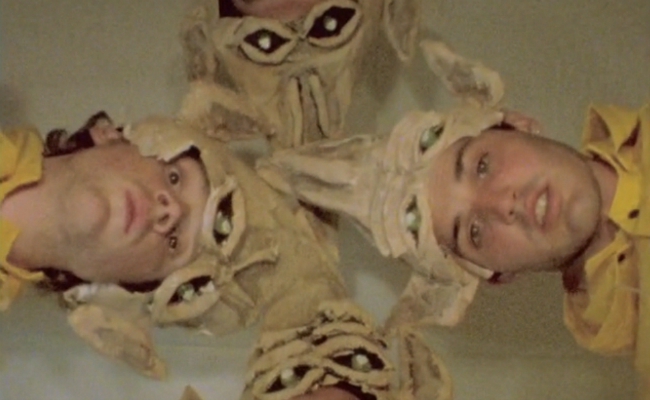 This week, we were very fortunate to get to new clips from some of the most talented ladies in music. Lana Del Rey dropped her explosive video for “High By The Beach” and Lauren Mayberry and her band Chvrches released a new song in “Never Ending Circles.” Also contributing to the girl power was Billy Corgan and Marilyn Manson covering “Girls Just Wanna Have Fun.” Alright, that last one may have been weird, but still, some great stuff this week.

However, that’s not all the new music that was released this week. Here are the best new songs and videos you may have missed this week.

The L.A. punks in FIDLAR have had a great streak in terms of making music videos. “40 Oz On Repeat” was a mashup of every great video ever made and “Cocaine” was just Nick Offerman peeing on everything he possibly could. In “Drone,” their latest, we learn a valuable lesson: “The truth is out there.” Now, it may not be applicable to your everyday life that men in alien costumes chase you with a laser ray, but still. #StayWoke

Hot Chip knows that karaoke is an all-time great night on the town. In their latest video for “Started Right,” a woman belts her best version of the track while the clip is interrupted with found footage and cartoons. It’s a dark, if not captivating watch, like watching anyone else perform on a karaoke stage. All you need is a cheap whiskey.

Sometimes, songs can be cryptic and deceptive, enticing you in with a title that seems like it’s about something dirty, but it’s about something else entirely. This is not one of those cases. Oscar-nominated actress and Barden Bella Hailee Steinfeld has grown more serious with her music career, and “Love Myself” is the exact step to take if she wants to do that. The visual combines a surface message of self-care along with a T-shirt that says “Self Service.” Do what you will with that juxtaposition, but she seems like she could turn a pop star career in a snap.

After a four year layover since 2011’s Era Extraña, Neon Indian has an official date for his next studio album. VEGA INTL. Night School, a nod to his previous group VEGA, will be the third record from Alan Palomo and company and everything we’ve heard from it thus far has been great. “Annie” was our first taste, and today we’ve got “Slumlord.” The synthpop track has a bit of Bounce influence as well as a slight tropical feel. It’ll be exciting to hear more of this turn develop when the band’s full album drops Oct. 16.

When the first Destroyer track, “Girl In A Sling,” dropped from his upcoming album Poison Season, we were afraid the funk had gone away in lieu of more morose instruments. But Dan Bejar’s new track thankfully combines the two ideas for a sort of David Bowie Young Americans feel. “Times Square,” thankfully far less obnoxious than its namesake, is a stirring guitar led track about losing yourself in the city life and it’s a great combo of new Destroyer and old. Now this is compromise we can get behind.