If you are too young to remember the 1990s and think the 1990s are cool, this is what the 1990s actually looked like pic.twitter.com/agWOiVa1w5

It’s August. It’s Friday. It’s the dog days of summer. Heck, it’s the dog days of writing about sports. There’s nothing happening. If you find the Olympics boring and have no interest in baseball, you’re maybe forced into reading a book or interacting with your family.

We here at Uproxx would like to do our part to prevent that from happening with this very important photo essay — 1990s Bill Clinton Doing Athletic Things.

We were inspired by the above tweet from Sarah Kendzior that featured Clinton and Vice President Al Gore enjoying a post-jog McDonald’s meal in short shorts (plus, today is Clinton’s 70th birthday!). Look at Gore, thinking about the planet way back then with his tucked-in map T-shirt. The 1990s weren’t this bad, let me assure you, but it’s hard to defend that.

Thanks to Getty Images, there is a lot more sports Clinton on which to feast your eyes. Behold the magic of photography! 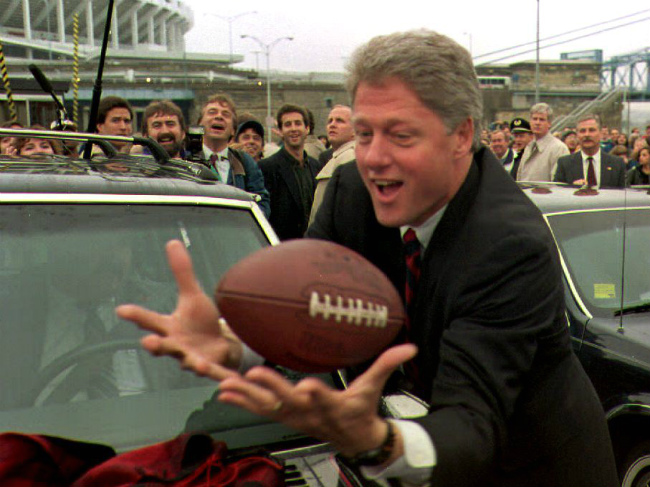 According to Uproxx’s Chris Mottram, “He is clearly not catching that football.” I disagree. He looks relaxed, focused and his arms are in good position. I say he cradled it and had two feet down in bounds. Nice work, Bill Jeff. 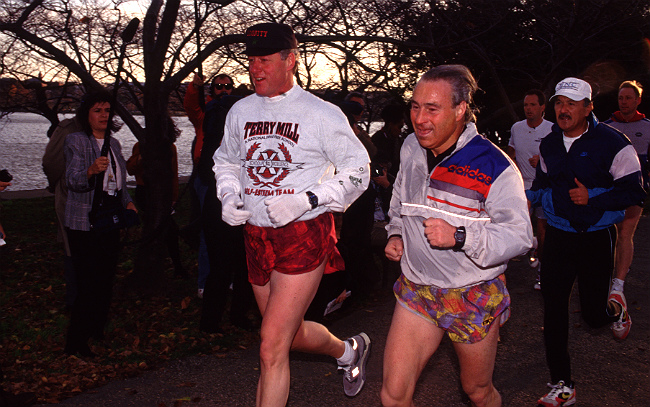 A little-known fact about the legendary Clinton jogs: If you came along on the run, you had to wear more ridiculous activewear than the president. “Look, I’m going to wear the shiny, short red Umbros so you have to wear [Clinton looks through his running shorts drawer] the short-shorts I made out of MC Hammer’s pants.” That adidas pullover is pretty sweet, though. 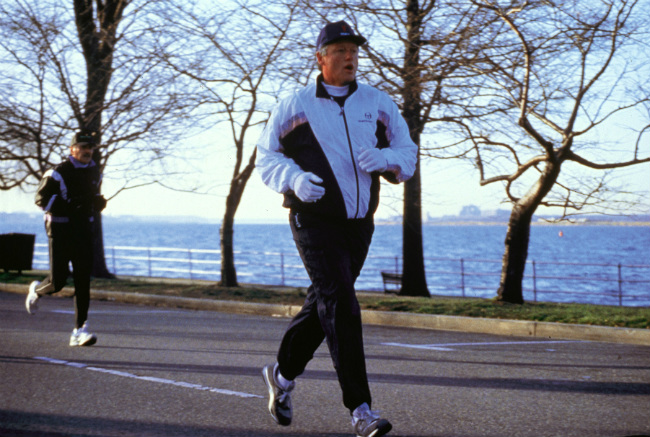 “I’m not running in the winter without those gloves mimes wear.” 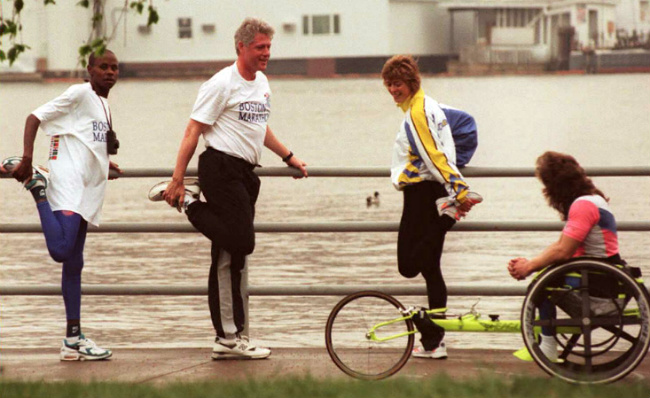 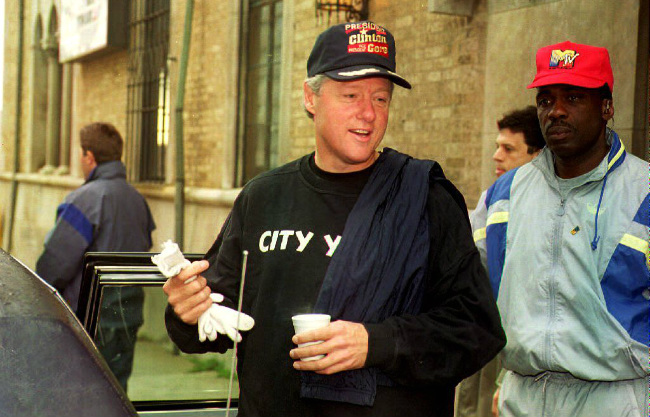 Look at that Secret Service guy. Look how unhappy he is. “I dreamed my whole life of entering this noble profession, protecting the president, potentially giving my life for his, and he makes me wear this stupid, red, MTV hat while he runs 14-minute miles.” 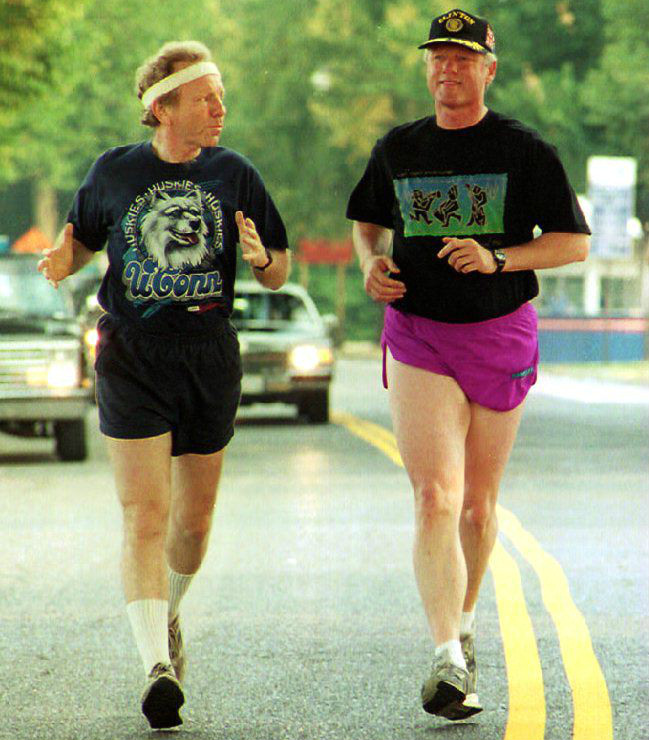 Joe Lieberman couldn’t fit into a goofier pair of shorts, so Clinton made him wear a UConn shirt and headband. When you’re the president, you’re the most powerful person in the world in ways you can’t even imagine. 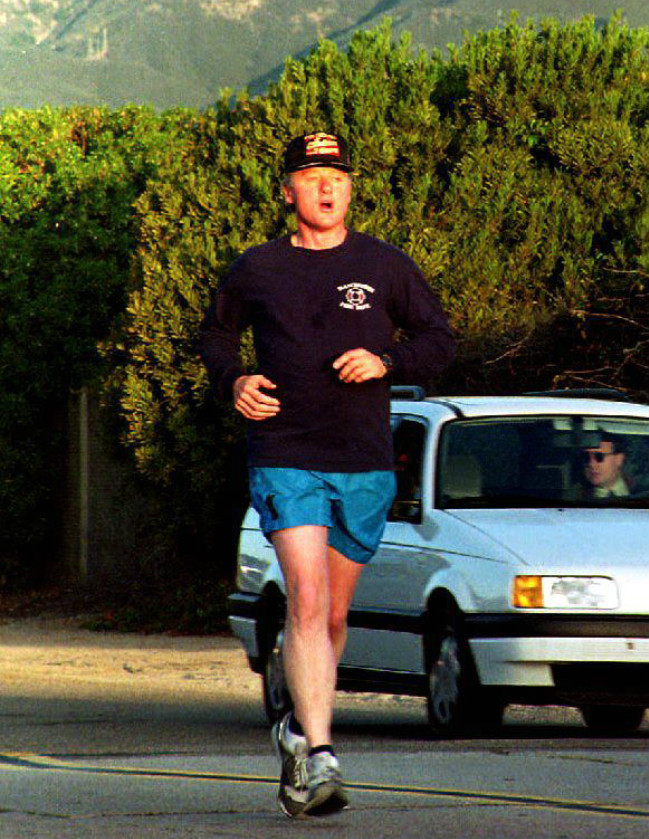 OK, this photo can be from present day. Shorts that don’t hug the plums, a standard long-sleeved T-shirt, a dad hat and what looks to be a Secret Service guy in a car scanning the woods for a sniper because god forbid the president use a freaking treadmill like the rest of us. 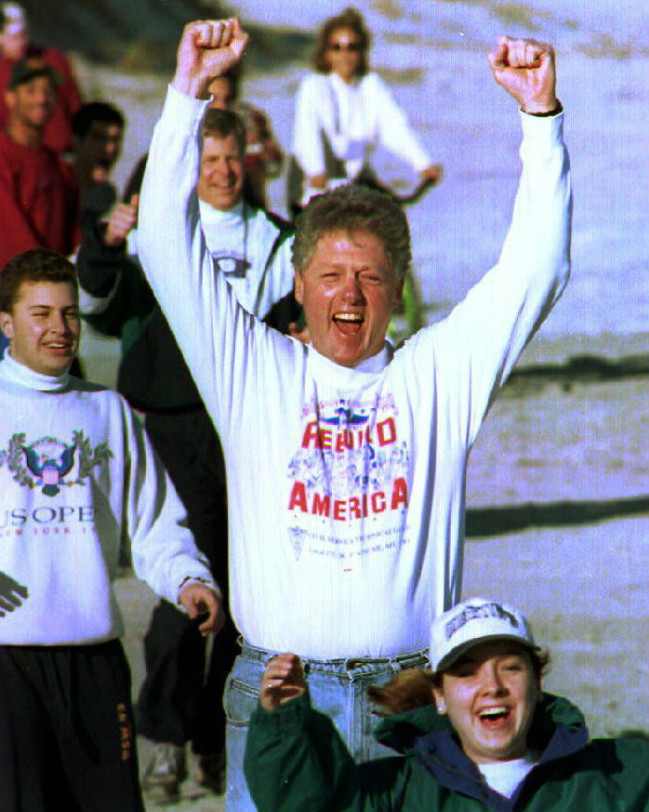 It just dawned on me. Middle-aged men jogged in the 1990s so they could tuck shirts into their jeans. It all makes sense now.

Thanks for reading and don’t forget to vote in November.