Donald Trump Wants A Muslim Database As Part Of His Plan To ‘Make America Great, Again’ 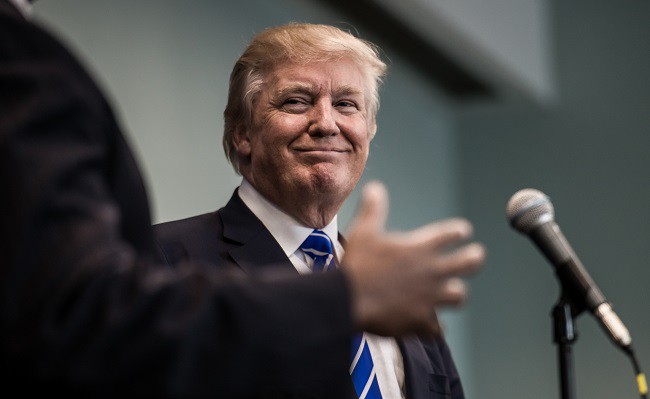 Current GOP front-runner and possible future president Donald Trump wants all the people voting out there to know that he’s going to do everything he can to make America great again. If that means wearing a baseball hat with a slogan, he’ll do it. If he has to build a wall to block out all the immigrants (like in China!), he’ll do that, too! And if keeping this great country’s citizens secure means requiring every Muslim in America to register for a national database, he’s not opposed to the idea.

CNN reports that Trump is unhappy with President Obama’s current handling of ISIS and would like to make sure that the public know that — unlike the sitting prez — he has a plan for how to handle terrorists when he comes into office. In an interview with Yahoo News, Trump said that when he’s in power, he’s going to send any Syrian immigrant Obama let in back to their homeland:

“They’re going to be gone. They will go back. … I’ve said it before, in fact, and everyone hears what I say, including them, believe it or not,” Trump said of the refugees. “But if they’re here, they have to go back, because we cannot take a chance. You look at the migration, it’s young, strong men. We cannot take a chance that the people coming over here are going to be ISIS-affiliated.”

But what about those Muslims who were in America before Obama allowed refugees inside our borders?

Yahoo News asked Trump whether this level of tracking might require registering Muslims in a database or giving them a form of special identification that noted their religion. He wouldn’t rule it out.

Previously, Trump has said that he’d also consider closing mosques in order to keep Americans safe. In addition, he’d also consider a controversial plan that would have Muslims carrying ID cards different than those of other citizens.

Trump’s plans for America may sound extreme, but they’re not out of the realm inhabited by his competitors. Ben Carson compared the immigrants to rabid dogs among peaceful ones, and both Marco Rubio and Ted Cruz have been open about their plans to halt the mass immigration of Syrian refugees.