The U.S. Has Ramped Up Airstrikes Against ISIS In Raqqa, And Syrian Civilians Are Paying The Price

On April 24, a group of Syrian women bundled themselves and their children into a car and attempted to flee the small town of Tabqa, outside of Raqqa. In recent months the sleepy principality had become the site of raging battles between Islamic State militants and U.S.-backed proxy forces, waging a campaign to drive ISIS from the country. Packed into the fleeing car were eleven people, including eight members of the al-Aish family: three women between the ages of 40 and 23, and five children, the youngest one just six months old.

The al-Aish family’s flight from a warzone was similar to millions of other desperate journeys made by Syrian civilians over the past six years. But they would not make it to safety. As they fled Tabqa, their car was hit by an airstrike, reportedly carried out by the U.S.-led coalition against ISIS in Iraq and Syria. All eleven people were killed in the strike, in what local reports described as a “massacre.”

A U.S.-led coalition warplane targeted heavy machine guns at civilians trying to flee the city of Al-Tabaqa, which is witnessing heavy clashes between gunmen,” reported the local anti-ISIS activist group Raqqa is Being Slaughtered Silently. The air raid led to “the death of a whole family.” Following the attack, photos of the young children from the al-Aish family circulated widely on social media and local news sites, including pictures of three-year old Abdul Salam and six-month old Ali. 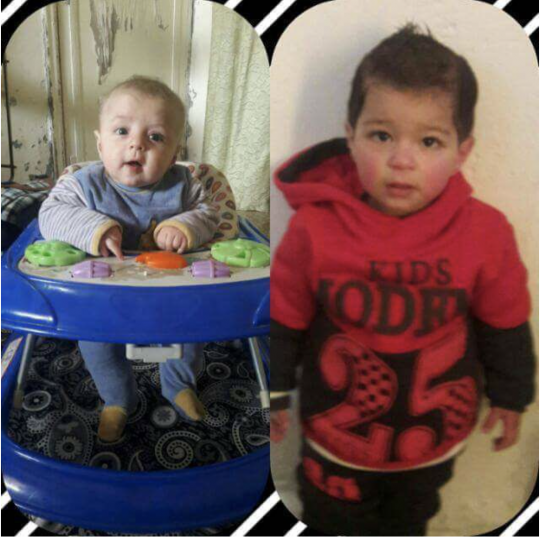 The strike that killed the al-Aish family was just one of an estimated 9,029 strikes carried out by the U.S.-led coalition in Syria since 2014. The independent monitoring group Airwars estimates that Coalition strikes in Syria and Iraq over the past several years have killed between 3,681 and 5,849 civilians, compounding the suffering of people who have already endured years of civil war. In recent months, local media have reported a steady stream of airstrikes that have hit civilian targets, including several particularly egregious strikes on packed schools and mosques.

But worse days for civilians in northern Syria could still be ahead, as the United States and its allies prepare for a terminal offensive against Raqqa — the last urban stronghold of ISIS and the capital of its deteriorating proto-state.

“Rarely a day goes by now when we don’t see three or four civilian casualty incidents attributed to Coalition airstrikes around Raqqa,” Airwars director Chris Woods told The Intercept. “All of the local monitoring groups are now reporting that the Coalition is killing more civilians than Russia on a regular basis.”

And when Woods refers to the Coalition in Syria, he is largely referring to the United States. Based on announcements from U.S. Central Command (Centcom), Airwars estimates that the overwhelming majority of Coalition strikes have come from U.S. warplanes.

But in contrast to Iraq, where the Coalition is providing air support for local forces fighting to retake the city of Mosul, there has been little public attention paid to the air campaign in Syria. “We have been killing a lot of civilians in and around Raqqa for quite some time now, yet these incidents are rarely admitted by the Coalition and there is almost no interest from international media,” Woods says. “We have to question where the empathy is for the local population.”

During the Syrian Revolution, Raqqa briefly became a center of civic activism after locals expelled government forces from the city in 2013. But the power vacuum that followed the government’s retreat led to months of vicious infighting between loosely-knit Free Syrian Army fighters and extremist groups. By 2014, the Islamic State had begun to assert its control over the city, assassinating rivals, conducting public executions, and declaring Raqqa the capital of its newly formed theocracy.

Today as many as 200,000 civilians are believed to remain trapped in Raqqa. In recent weeks gruesome videos have emerged of people being killed by ISIS fighters as they attempted to flee the city, along with reports of deaths caused by Coalition airstrikes. Last week, 16 civilians were allegedly killed in one airstrike that hit the village of al-Baruda, west of Raqqa. The dead in that strike reportedly included a woman and her five children, and several couples — people whom local activists said had been refugees from fighting in other parts of Syria.

Kinda Haddad, a Syria analyst with Airwars, told The Intercept that there has been a significant increase in civilian casualty incidents caused by Coalition airstrikes since January. A disproportionate number of those killed have also reportedly been women and children. Families have been killed while bunkering down in their homes or making last-ditch attempts to drive to safety. “A lot of the civilians left in ISIS territories are the most desperate. Anyone with money and means has already left, while the ones who have remained until today had no other option,” Haddad said.

The airstrikes, as well as alleged atrocities carried out by U.S. allies, have embittered some Syrian activists towards the U.S.-led anti-Islamic State campaign, including those who have spent years documenting the abuses of both ISIS and the Assad government.

“We saw the same thing in Aleppo when the Russians were bombing the city. There were daily massacres for a couple of months before the city fell that angered many people there, among both the moderate groups and the non-moderate groups,” Haddad says. In an interview on CBS News “Face the Nation” this Sunday, Secretary of Defense James Mattis said that the United States had shifted towards “annihilation tactics” in its fight with ISIS militants, as the battle moves towards its final phase.

But as the U.S. accelerates its strikes, the situation for civilians has become more bleak. “Maybe [the Coalition] saw what Russia did in its campaign and decided that it had worked,” said Haddad, reflecting on the spiking death toll in recent months.

Meanwhile, the ground campaign against ISIS in northern Syria is currently being led by a U.S.-armed proxy group, the Syrian Democratic Forces (SDF), which includes the Kurdish People’s Protection Units (YPG) as one of its major component forces. In recent weeks the SDF has reportedly begun preparations for a final assault against Raqqa, one that may end up being as bloody as the Iraqi military effort in Mosul. Recent reports have revealed that U.S. ground forces are taking a direct role in the Raqqa campaign, providing artillery support for local forces.

Given past precedent, military experts say that once the ground battle moves into the city of Raqqa itself the risk to innocent people is likely to increase significantly. Faced with grinding urban conflict U.S.-backed troops will likely call in air support to hit ISIS positions, a risky prospect in a city still inhabited by hundreds of thousands of civilians. This has been the case in Mosul, where civilians have been trapped in heavy fighting in the dense old city. This week, Centcom admitted that one of its strikes in Mosul had killed 105 civilians, but blamed an ISIS booby-trap for the scale of the explosion.

“Anytime you have urban military operations, avoiding civilian casualties inevitably becomes harder,” says Jay Morse, a retired U.S. Army Lieutenant Colonel judge advocate and senior military advisor at the Center for Civilians in Conflict. “You have to operate under the assumption that there are civilians everywhere in the city, especially in an operation where the ultimate goal is to liberate these civilians from ISIS.”

Foreign Policy recently reported that the U.S. military will no longer confirm which nation is responsibility for civilian deaths caused by Coalition airstrikes. Centcom began taking responsibility for civilian casualties from its strikes in 2015 (though with numbers far lower than those given by outside reports.) Its allies, however, including France, the United Kingdom, Belgium, the Netherlands and Australia, have pressured Centcom to stop specifying which country carried out which strike. This move will likely make the air campaign in Iraq and Syria more resistant to public scrutiny, making it even harder for civilians to obtain recognition or recompense for harm.

Although airstrikes may be seen as a way to defeat terrorists more quickly, Morse says that civilian protection cannot be considered a secondary concern in a conflict being driven in part by a cycle of retributive violence. “You have tactical and operational victories when you are trying to secure cities and buildings, but part of defeating ISIS and similar groups is about not giving them opportunities to recruit more fighters,” he says, citing the impact on public opinion when civilians are killed in U.S. military operations.

Thanks to cameraphones and social media, the deadly consequences of U.S. military operations are indeed being recorded, shared and watched around the world on an unprecedented scale. But while civilian deaths are regularly reported in local media outlets in the Middle East, they are seldom reported in detail by international media.

“Civilian harm and the damage that these types of conflicts cause is always underreported and is always underemphasized,” Morse says. “But these are the people who are suffering the most, frankly from both sides.”

The post The U.S. Has Ramped Up Airstrikes Against ISIS In Raqqa, and Syrian Civilians Are Paying the Price appeared first on The Intercept.