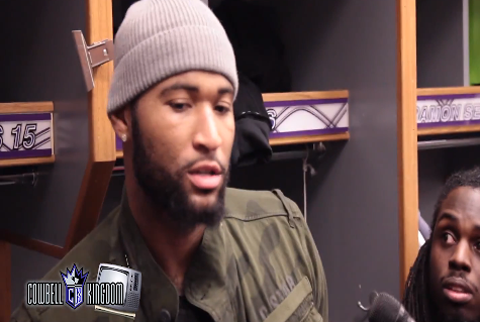 We haven’t covered the merry-go-round of coaching speculation in Sacramento, but reports have come out that DeMarcus Cousins was somehow blocking the hiring of George Karl. Ailene Voisin of the Sacramento Bee refuted that rumor this weekend, and all the while Boogie is expected to carry a team that started as a surprise playoff contender and has fizzled over the last couple months into a lottery lock. So what did Cuz say after his buzzer-beater ripped the hearts out of the Suns for the fourth time this season? Some preaching that should have included a pulpit, and made us want to adopt DMC even more.

Before we get to Cousins’ soliloquy on God and his tribulations in Sacramento, the Kings are busy parsing away whatever may be blocking the hiring of Karl. Per Adrian Wojnarowski and the Sacramento Bee‘s Jason Jones:

Tyrone Corbin is still the coach for now but it's sounding more like the next two games will be his last as coach.

Voisin spoke with Boogie’s rep, who denied he’s holding up any Karl hiring…

DeMarcus Cousins' agent telling me they are not "blocking" Kings/Karl deal. Says if Kings want Karl then "make the move. We don't run team."

But Sam Amick of USA Today reports differently, and adds that his reps reluctance to accept Karl’s hiring is starting to subside:

According to three people with knowledge of the situation, the last hurdle in a possible partnership was the complicated component relating to the team’s star player, center DeMarcus Cousins. Yet as of Sunday evening, there were signs that the resistance from Cousins’ camp was waning and that the two sides could be nearing a deal. The people spoke to USA TODAY Sports on the condition of anonymity because of the private nature of the process.

Cousins’ agents, Dan Fegan and Jarinn Akana, have been adamantly opposed to Karl’s hiring. But general manager Pete D’Alessandro had appeared willing to make the move without their consent. If that has remained the case, and if Kings owner Vivek Ranadive approves as well, then the Kings will be on their way to fixing what’s broken with their fractured team.

So with all that roiling beneath the surface, and Boogie playing hero at the end of Sacramento’s home defeat of the Suns, he was understandably spent when faced with an avalanche of media speculation after the game. Thus, God was evoked, and here we thought we couldn’t love Cousins anymore:

I have been around Cousins in the locker room for several years now, and he’s usually either jovial or in a reserved mood. This was certainly different. It led to some Kings players asking the media afterward what they had asked Cousins. But nothing was asked. An observation was made about how he looked like he was still really pumped up following the game-winning shot, and it prompted that response.

The Kings Instagram gave Boogie some props, but this muddies the waters even further since aren’t they supposed to be consigned to whatever management is doing? It’s because they don’t know what’s going on, either.

We just want like two years of drama-free existence for DeMarcus. We’re pretty sure he deserves it, but after firing Mike Malone, now Vivek Ranadive and Co. are giving the interim coach, Tyrone Corbin, the unenviable task of trying to lead this team with his butt firmly in the fire.

The truly mind-boggling part of all this is Cousins has done a remarkably good job — all things considered — keeping his cool even while the rest of the world tries to wrest any constancy out from under him.

Our advice: just let the guy ball, and figure out the other stuff when the season is over.

Will the Kings ever shed their dysfunction and get Cousins some help?