This Week In Posters: So This ‘Han Solo’ Guy Must Be A Pretty Big Deal, Huh?

This week in This Week In Posters, we begin with this poster for Action Point, starring Johnny Knoxville, who’s a big enough star to get his name above the title, but not big enough not to be introduced as “the star of Jackass.” The poster itself looks like a cross between Meatballs and the album cover for Green Day’s Dookie. I’m expecting hijinks. Also, is it just me, or does that character of Knoxville make him look kind of like Michael Shannon.

This is just one of a new batch of character posters from The American Meme. The great thing about “meme” is that it can be pretty much anything that makes you go “I recognize that.” So, yeah. Emily Ratajkowski. Fame is not private. Those are things I understand, I guess.

*Pushes glasses up nose* *Looks up from leather-bound volume* I like it when the boobs are squashed together.

Whoa, snapping selfies on a bare single mattress? Is this a thing? Is that a young Madonna? I have to admit, I do not recognize this meme.

“Fame is a beast” accompanying a picture of… The Fat Jew? Does that mean the Fat Jew is meant to be the beast? Or fame? I’m not sure either of those things are the first attribute that comes to mind to describe The Fat Jew.

Kids, future, DJ Khaled’s kid, sure, why not. I would’ve also accepted a picture of the rapper Future. That one probably wouldn’t have translated as quickly.

Maybe this is an inside joke I’m missing, but this has to be the weirdest one of these. “Not for the weak” is represented as… a sad guy dressed as Wonder Woman at a strip club? What’s happening here? Is this actually world famous YouTube Prankasaurus Chris Del Chris?

Okay, I recognize the Lennon-Ono pose, but who are these people? Is that motocross star Phoenix Duffy and his baby mama, tattoo artist Inky Robins? Is this a promo for the Vine Star tour? I need a translator for these.

Something about that font makes me think this should be a TV show. Is it that it looks like the little TV rating box?

Whoa, is this for “Deadpool Babies?” I’m actually a little creeped out by how fully realized this is. Nice work, I guess?

Deadpool 2, I get it! And again with the unicorn. Sorry, I refuse to look this up.

The mistake this poster makes is assuming that people who want to watch a dog movie (me) need the dog to be wearing a funny hat. “Love comes when you call it” is a pretty great tagline though.

“Finn Wolfhard” seems like a little too on-the-nose of a name to be starring in a dog movie. On the snout?

I’m gathering that this movie will have different kinds of dogs.

It’s interesting to me that the ultimate boss move is not putting your arms through the sleeves in your coat. How did that even start? Also, is that a nurse in the middle? She seems like the focal point of this poster, but I’m not sure how she fits in. Is she doing a house call… at a hotel? Is she an evil nurse?

“Well, they already know that Jim Parsons and Claire Danes are in this, but maybe add them in at the bottom in a nonsensical person collage where no one’s eye lines match up. …Yes, perfect.”

Is that a DJ kit? A gun? This looks cool but this poster is too dark. Did they let the Game of Thrones cinematographer design this or something?

All he needed was a way out… And so he found… a giant portal?

I was about to make fun of this and the movie poster cliché of lots of trees, but then I saw that it’s from the Winter’s Bone director. Winter’s Bone owns.

Were skulls an Alexander McQueen trademark? Because otherwise, a giant skull imagery for a movie about a dead guy seems kind of dark. Too soon, man, too soon. By which I mean he’s probably not even that decomposed yet.

I don’t know who Mr. Soul is, but this poster was cool enough that I Googled it, which seems like a success.

Before Oprah and Arsenio, there was a man named Ellis Haizlip. From 1968-1973, Haizlip hosted a groundbreaking weekly TV show called SOUL! that aired on PBS networks that celebrated the Black community and changed the television landscape. Ellis’ niece and documentary filmmaker Melissa Haizlip puts the spotlight on the game-changing show in the documentary Mr. Soul! [Deadline]

And now you know.

Ah shoot, this reminds me that I still need to see the first Wreck-It Ralph. This poster looks like the Silicon Valley intro. Is Ralph going to wreck the internet in this one? Go Ralph! Save us from this online prison!

Did they just not want to call this “Maid in Manhattan 2” or what?

In Mexico… everyone has a submachine gun.

I like this poster design a lot, but I wonder: what’s more of a kiss of death, American Flag imagery or people in the poster wearing a scary mask? Scary mask posters are the Affliction shirts of movie posters.

That being said, great job matching the faces with the names.

I like that he’s holding his gun all casual, as if to say “he flip you. Flip you for real.”

I have to admit, not many people look as badass in soldier gear as Josh Brolin. He actually makes being a Narc look cool.

“No rules this time.” Oh, you mean as opposed to last time, where Benicio Del Toro murders a drug dealer’s entire family at the dinner table? I can’t wait.

This poster is very minimalist, just two ladies names above a martini glass. Is it presumptuous of me to assume that they do lesbian stuff?

Wait, didn’t this movie already come out? I vaguely remember seeing posters for this like a year ago. And now it’s finally coming out… in September?! Jeez, okay, maybe next time start making the movie before you put out 12 posters. I still think it’s weird that the Yetis don’t have noses.

This is the first of a giant new batch of Solo posters, which are basically the same as all the other giant batches of Solo posters. It seems like the goal here was to make them look as 1970s as possible, like I should be watching this on top of an avocado throw rug in the back of my van. Even that facial expression looks 70s, somehow.

Emilia Clarke is the only one who doesn’t fit. Everyone else looks like they’re going to a 70s weed party and Emilia Clarke looks like she should be wearing a poodle skirt and heading to the Enchantment Under The Sea sock hop.

No matter what happens with the actual movie, it’s pretty clear that the costumes are totally boss.

Does Chewbacca always wear the bandoliers? Are those like his dog-man collars so that you know he’s not a stray?

The only thing that stops a bad guy with a gun is a good dog-man with a gun.

The paradox of Solo is that it looks like they’re on a hot, dusty desert planet, yet everyone is wearing fifty layers.

Oh hell yeah, Thandie Newton is doing the Pam Grier face. This is gonna be good.

I hope the twist is that the guy with scars on his face is actually a good guy this time, but I’m not counting on it. It looks like Paul Bettany got scratched by Alexander Skarsgard and now he’s turning into him.

Well that’s good, I don’t know if I could’ve lived without the knowledge that Phoebe Waller-Bridge is the voice of the L3-37. Also, is this robot doing a peace sign? Is this, like, some super smooth ladies-man robot (or ladies woman, as it were) that’s been trained by Lando Calrissian? This feels like a ripoff of both Chappie and Pimpbot.

So is this guy the new porg or what?

Same pose. Always the same pose. Han Solo is such a hearthrob that he’ll look through his brow even when he’s trying to aim a blaster. He’s a slave to that pose.

SHOOT THEM, DOG MAN! Man, I want to live in a world where giant dogs can shoot guns.

Lando is still chill as hell even when there’s a pew-pew laser space battle going on behind him.

Okay, she looks a little more period-appropriate in this one. I think the ponytail was throwing it off. I don’t know why we needed the dirt flying around when we already have the lasers back there.

I mean he’s gotta be hot under there, right? He’s wearing a full-length canvas cape, some thick coveralls, with a turtleneck underneath, and that’s just what we can see. If it’s above 40 degrees he’s going to be sweating his ass off.

I only know that this is for something called Suspiria because of the file name.

Tag. Yep, it’s a movie about adults playing tag. I’ve noticed one thing studio comedies like to do is put together a bunch of people who look like they would never hang out together in real life. Come on, guys, it’s a friend group, not a boy band.

Also, a movie about tag seems dangerously close to the fake poster I made for a Vince Vaughn-Owen Wilson vehicle I made up: 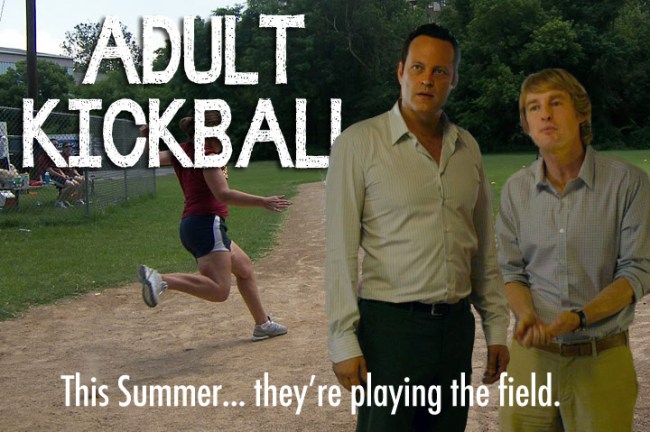 I understand the syringe, but why is there glass shattering? Do they fall off the gurney? Someone needs to secure that operating room.

This movie needs to come out already so I can understand what the hell is going on. Is it going to be like a Borat thing where the basketball scenes are real? Otherwise I can’t imagine Kyrie Irving is being cast for his acting skills.

This Venom poster strikes me as a little too Photoshopped-looking. By the way, remember the other day when everyone was freaking out about Venom’s giant tongue? Ever think that’s just the way Tom Hardy’s tongue looks? It would explain all the mumbline.

Ooh, I don’t know if this is going to work. Has Jessica Chastain ever played a strong woman before? Someone check on this for me.