Not that long ago West Coast IPAs were all the rage. In fact, you could argue that the power of these hop-driven, often piney beers helped launch the craft beer industry on its current trajectory. Then along came an East Coast beer to ignite a new West Coast/East Coast rivalry akin to Biggie Smalls asking ‘Pac “who shot ya?”

These days, New England IPAs are what everyone seems to be brewing, drinking, and talking about. In the process, the dank West Coast IPA has lost some of its shine. 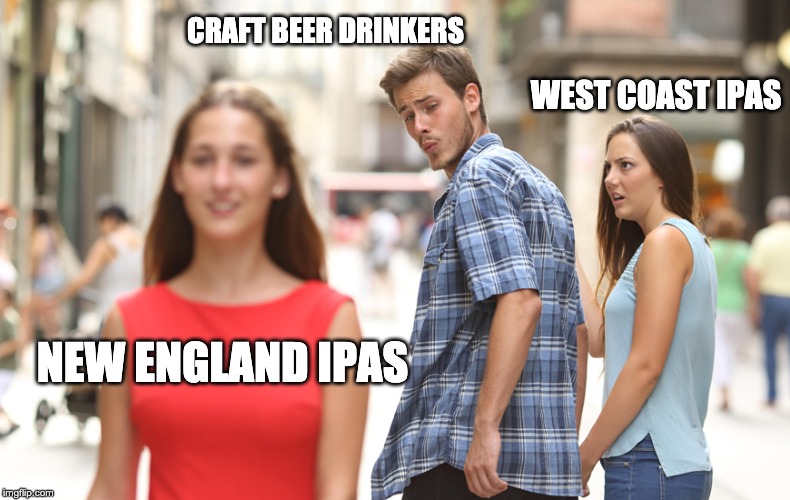 Memes aside, the West Coast/East Coast beer division is legit. These beers may be cut from the same cloth but have very little in common. Yes, they’re both malts, water, yeast, and hops combined in a specific ale-orientated order. But the flavors and look of these beers can be massively divergent, even though they’re both technically “India Pale Ales.”

As with all things, personal preference does not equate to higher-quality or something being somehow “better.” It comes down to taste, palate, nostalgia, and what’s new now. We all have our go-to beers but are also easily enticed when a new sip comes along with an exciting look and feel. So, let’s dive into what makes New England IPAs stand out, not above, the classic West Coast IPA.

Related: Picking Apart The Minute Differences Between Porter And Stout

A West Coast IPA is American-Style IPA if you want to be super technical. This is a clear beer with a golden color that ebbs towards copper in some iterations. As with all ales, this is a top-fermented beer using ale yeasts in warmer temperatures (as opposed to lagers which are bottom-fermented with lager yeast and cooler temps). The malts used tend to be dialed into malted barley with few exceptions.

Then there are the hops. This is the star of the show for a West Coast IPA. The hopping is generally achieved with the abundance of hops grown in the West Coast, especially in Washington State (though Southern hemisphere hops are used on occasion). The maltiness is dropped out almost entirely so that the bitterness of the hops can shine.

In a standard West Coast IPA (that is, one that isn’t dry-hopped or not a double IPA or triple, etc.), the IBUs, or bitterness units, should be between 50 and 70 but can edge into the low 100s. That’s pretty damn high. For reference, a PBR has an IBU of 10. Pliny the Elder — a stonecold classic West Coast IPA — has an IBU of 100. So, yeah, that’s a whole lotta bitter.

But it’s more than just bitterness. It’s about what’s present in that hoppy nature that makes a West Coast IPA what it is. First, there needs to be a clear fruity nature that according to the Brewer’s Association definition is “berry, tropical, stone fruit and other.” There should be floral notes alongside citrus. Then there needs to be a distinct hop and pine resin funk that leans towards an often over-ripe garlic/onion combo. For some, that last note is a deal-breaker as it can lumber into a body odor note.

When dialed in, a West Coast IPA is distinct in that it should be crystal clear and boldly dank like a big ol’ bag of cannabis with pine, hop, floral, citrus, onion, and fruit notes.

New England IPA, also known as Juicy or Hazy IPA officially, is the new kid on the block that folks can’t seem to get enough of. Like all IPAs and ales, it’s made with top-fermenting ale yeasts. However, to achieve that hazy nature, NEIPAs often cut their barley malts with malted wheat, oats, or other adjuncts and then don’t filter the beer. This can add extra depth to the beer and a few more flavorful notes.

What’s interesting with these beers is that the hop aromas are still very high but the IBUs are dialed way back. The IBU of some NEIPAs can be as low as 30. For comparison’s sake on that front, a Guinness off the draft has an IBU of about 45. So these beers are intrinsically more accessible for folks who can’t do too much bitterness.

When it comes to what flavors are being carried through the beer in those hops, we have a pretty big variance. Juicy is in the name of the beer, so we think you can guess where this is going. The juicy fruit nature is achieved through large amounts of hops added late in the brewing process. And, as noted by the Brewing Association’s definition, that juiciness is often accompanied by notes of “citrus, pine, spice, floral or others.”

Okay, we admit, there’s a lot of overlap in those flavors, but bear with us…

If we’re talking about beers that both are citrusy, piney, floral, hoppy, and fruity then… aren’t they the same? Not quite. NEIPAs are hazy and that adds a different texture to the brew. It’s inherently silkier on the mouthfeel. It’s not that a West Coast IPA is more abrasive but there is definitely more of a sharp nature to the sip.

Then, there is which of those flavorful notes are in the foreground and which are in the background. NEIPAs tend to push the fruit, juice, florals, and spice forward while West Coast IPAs tend to push pine resin, citrus, and tropicals forward. Just to be clear, we are using the word “tend” here because there are a million exceptions to these very broad definitions.

In the end, the crystal clear sharpness of a dank, pine resin-forward, citrus-y, and floral West Coast IPA like a Pliny The Elder, Sculpin IPA, Two Hearted Ale, Torpedo Extra IPA, and so many more are still powerhouses in the beer world, and will be for a long time to come. Still, NEIPAs like Heady Topper, Abner, Hazy Little Thing IPA, Julius, and thousands of others are dominating right now.

Neither is better or worse. It simply comes down to what you’re in the mood for right now. Or what you haven’t tried. If that means it’s time for you to dive into NEIPAs, here are some of our favorites before Summer ’19 ends.