Atlanta trap music pioneer Gucci Mane appears to be upset at Atlantic Records and says he’s leaving his deal in a new tweet that called Atlantic “polite racist” in their dealings with him. “Leaving #AtlanticRecords July 3rd these crackers polite racist #SoIcySummer,” he wrote before deleting the tweet. HotNewHipHop was able to grab a screenshot, however, which you can see below. 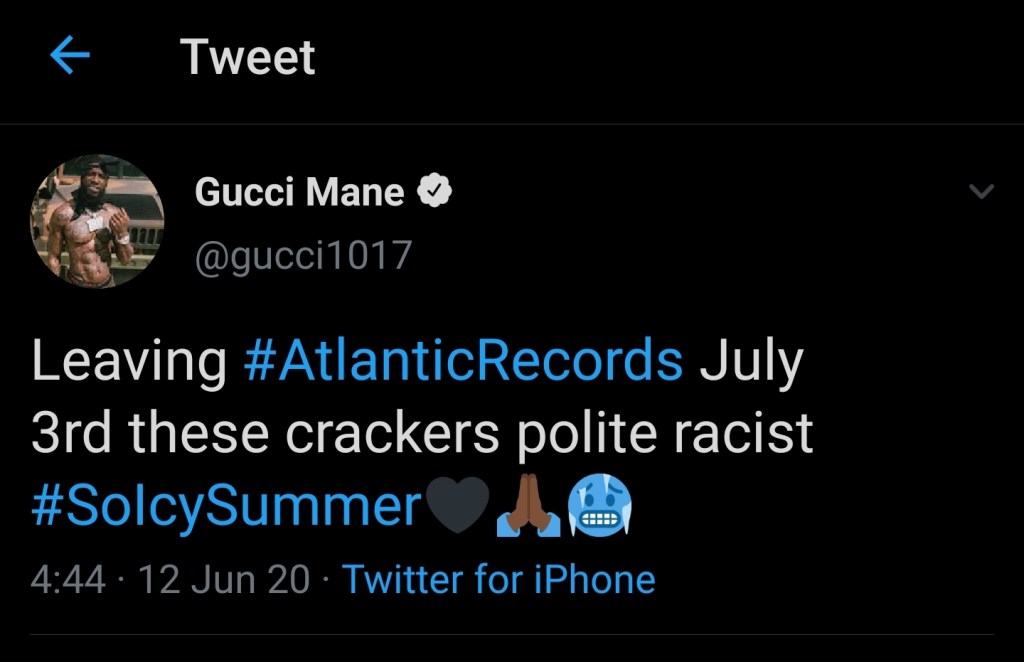 DatPiff was also able to grab a screenshot of another tweet referencing “the most polite racist ever,” so it’s possible that Gucci is referring to a specific person, but without any further comments from the man himself, there’s little info to go on. However, his ire doesn’t seem limited to just Atlantic, as another since-deleted tweet screen-capped by No Jumper podcast implored “all artists let’s go on strike. F*ck these racist ass labels. Burn them down too.” He included the hashtag #BlackExecsMatter, which may provide a hint to his beef as Black executive-level employees are few and far between in all corners of corporate America.

@gucci1017 wants all artists to go on strike and says ”F*ck these racist ass labels burn them down too.”

— y'all agree with Gucci? pic.twitter.com/jJeCnVnQMg

Gucci’s discontent may also offer some insight into Asian Doll’s previous posts wishing she wasn’t signed to Gucci’s 1017 Eskimo Records, as 1017 is also distributed by Atlantic. Gucci has released six studio albums and four commercial mixtapes under Atlantic, including Delusions Of Grandeur and East Atlanta Santa 3.