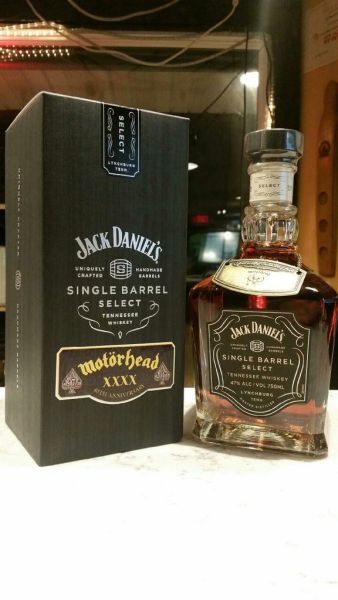 This might come as a shock to more delicate readers, but late Motörhead frontman Lemmy Kilmister was known to have a drink from time-to-time. It was this occasionally sitting down with a drink after a long day that pushed fans to rename a “Jack And Coke” a “Lemmy.” And now Jack Daniel’s themselves have taken it one step further, releasing a signature batch of Motörhead whiskey in the singer’s honor.

The first batch leaked early on the website of The Atlantic City Bottling Company and quickly sold out. Though the item has been removed, BroBible was able to snag the bottle’s description:

Once a privileged reserve only for the Jack Daniel’s Master Distiller – exploring the nuances of whiskey from a single barrel. Today, connoisseurs around the world can savor this experience on their own.

We have selected one that is dark, oaky, but still some corn and sweetness with that signature Jack smooth charcoal smoky finish

Raise a glass and celebrate with Motörhead and their ol’ friend Jack.

THE FIRST BARREL IS LIMITED TO 288 BOTTLES.

THE PROCESS OF BARREL SELECTION TO BOTTLE TAKES APPROXIMATELY 6 TO 8 WEEKS AND WE EXPECT BARREL 1 TO SELL OUT INSTANTLY. IF THIS IS THE CASE TO AVOID ANY DISAPPOINTMENT THE WEB STORE HAS THE FACILITY FOR CUSTOMERS TO PRE-ORDER AND RESERVE A BOTTLE.

YOU WILL BE INFORMED ONCE NEW BARRELS ARE SELECTED AND AVAILABLE FOR SHIPPING.

We have to assume Lemmy would approve, even if he had switched to vodka. Though the first batch is already toast, eagle-eyed Motörhead aficionados should keep an eye put for further releases.