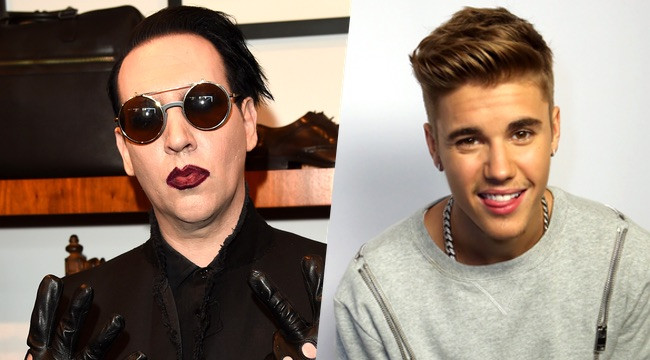 Oh, Justin Bieber. Every time it seems like he may be harboring some goodwill, that the tide may be turning in his favor, he seems to do something that makes people cluck their tongues, stroke their beards, and talk about what’s to be done with this Justin Bieber? This time around, the issue revolves around a new piece of merchandise which is, in fact, an old piece of Marilyn Manson merchandise.

The merchandise in question is a black, sleeveless shirt that has a photo of Manson on the front, along with his name. So, from this perspective, it’s a Marilyn Manson shirt, not a Bieber shirt. It’s also the exact shirt you can get at Hot Topic for 17 bucks. The back reads, “Bigger Than Satan … Bieber.” This is what makes it Bieber merchandise, as opposed to a shirt from Hot Topic.

Well, there is one more difference. The shirt costs $195. No, really. It’s being sold by luxury retailer Barney’s for almost $200. That is completely insane, and certainly not the kind of thing that is going to make those who are opposed to Bieber change their minds. Basically co-opting some Manson merchandise is silly enough as it is. Asking people to pay out the nose for it is just plain dumb. Better luck next time, Biebs.