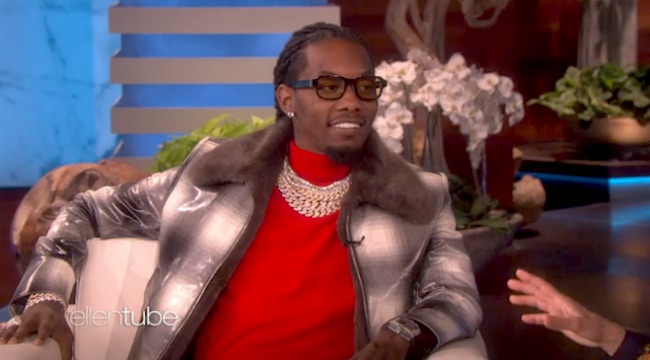 Ellen DeGeneres has had some high-profile hip-hop guests on her show over the past few months, like Travis Scott and Meek Mill. On today’s Ellen, Offset was the guest, and he was all over the show.

During his conversation with DeGeneres, he talked about, among other things, his very public (and controversial) apology to Cardi B, which he made during her Rolling Loud set. Offset told Ellen that it was important for him to take their break-up seriously, admit that he was wrong, and let himself be vulnerable:

“I love my wife, so it’s serious, not a game to me. We have schedules and we have shows. I just felt like if I gave that break between time — I just can’t give that break between time. So, as my forefront, I stepped to it as a man and said, ‘I’m wrong.’ I stepped to it as a man, and you don’t have to take me back but I just want you to know I love you and I care. I’m putting it all out on the table.

I asked her to marry me in Philadelphia at the radio show in front of 60,000 people. So, it’s like, when I did that, they were like, ‘Oh, why’d you do that?’ It’s just my affection, so I’m not hiding it. I’m not hiding my affection for you. It’s me being vulnerable, I guess. It kind of bit me with the response of people, but that’s why men aren’t trying to be vulnerable. Because when you do it, it’s something wrong with it either way.”

Scott also returned to the show, to join Offset for a performance of “Legacy,” from Offset’s new Father Of 4 album. Watch that and videos of Offset’s conversation with DeGeneres below.