With each election comes the typical mudslinging, and since mudslinging has been called “as American as apple pie,” then Donald Trump is truly making mudslinging great again by getting relatively innovative through a not-so-subtle jab at Hillary Clinton before tonight’s debate.

Donald J. Trump for President Inc. has paid for a personalized Snapchat filter that will frame subjects in a poster that shows off their enthusiasm for taking part/viewing in what should be one of the most-watched presidential debates in history. To Trump, this isn’t “Donald Trump vs. Hillary Clinton,” this is Donald J. Trump vs. “Crooked” Hillary amidst fireworks and a healthy amount of red white and blue. With a quick glance, you might even think this is a normal, topical, Snapchat filter that’s celebrating one of the steps towards electing the next leader of the free world. 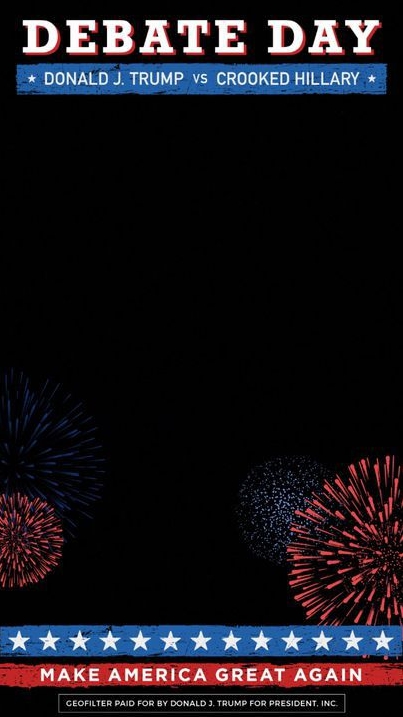 Things definitely ease up on the negative campaigning with a typical elephant vs. donkey as a stylized Hillary and Trump have a war of words.

The other filter sponsored by Trump gets a little more Trump-y, showing him parachuting from “Trump Force One” on his way to landing behind a Trump podium and a loving crowd.

The motivation behind this is clear — Trump wants to garner the Millennial vote through one of the most popular social media platforms in existence. Ted Cruz, Hillary Clinton and Bernie Sanders have used the platform to not only reach out to their supporters but knock their opponents but, at this late in the game, will it work? Can this get him votes, or will it only further cement a troll-ish confirmation bias while not actually addressing any issues?

There is currently a large contingent of undecided voters between 18-29 in this election — exactly the demographic that Snapchat caters to. But will a filter move them to either candidate?