It is easy to forget that the Star Trek franchise has been cranking out films and shows for a long time. There have been six series — Star Trek: TOS, Star Trek: The Animated Series, Star Trek: The Next Generation, Star Trek: Deep Space Nine, Star Trek: Voyager, and Star Trek: Enterprise — with a new one on the way and 12 feature films, with one on the way. Due to the large ensemble cast and multiple plot lines per episode, this means that at one time or another an absurd number of actors have appeared in minor roles.

Check out 31 of our favorite Star Trek cameos and let us know in the comments if we missed anyone. Also look for our look at the franchise’s best guest actresses as well. 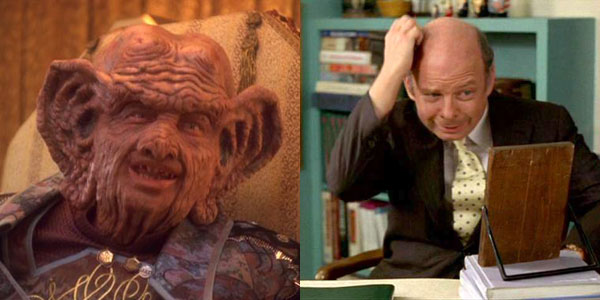 Wallace Shawn, best known for playing Vizzini in A Princess Bride, was Zek the Grand Nagus of the Ferengi Alliance in Star Trek: Deep Space 9.

James Worthy, the three-time NBA Champion, played Koral, a Klingon mercenary and smuggler, in Star Trek: The Next Generation in the episode “Gambit: Part II”.

Stephen Hawking plays himself in a game of poker with Sir Isaac Newton, Albert Einstein and Data in the Star Trek: The Next Generation episode “All Good Things…”. When he’s not making cameo appearances on The Big Bang Theory, Hawking currently works as director of research at the Department of Applied Mathematics and Theoretical Physics at the University of Cambridge in England.

Dwayne “The Rock” Johnson played a Pendari champion (a kind of gladiator) in the Star Trek: Voyager episode “Tsunkatse.” 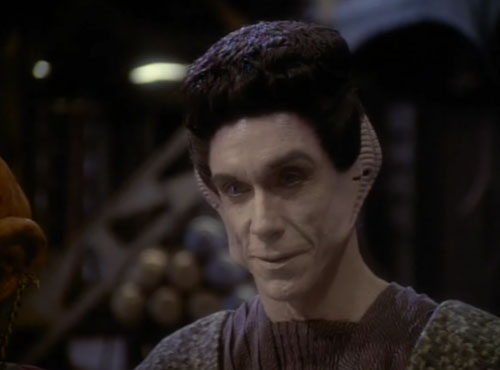 Bryan Singer, director of X-Men and X2, appeared as a tactical officer in Star Trek: Nemesis. 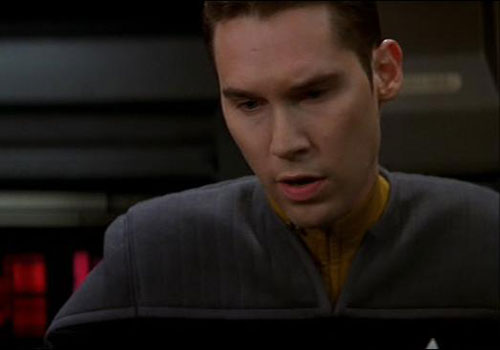 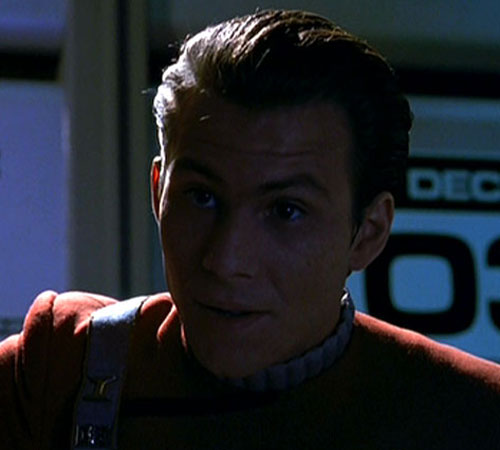 Kelsey Grammer of Cheers and Frasier played Captain Morgan Bateson, a captain of the Enterprise whose ship was stuck in a time loop, in the Star Trek: The Next Generation episode “Cause and Effect.” 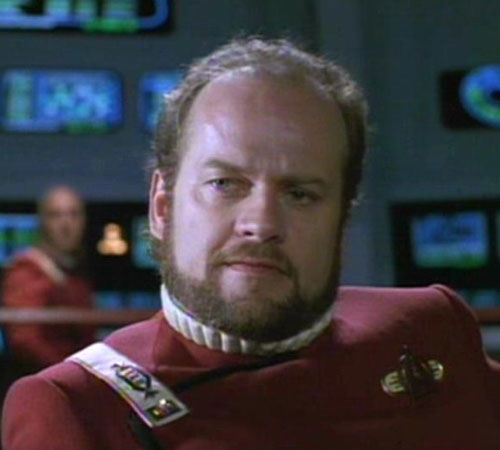 Jonathan Banks, more famously known as Mike on Breaking Bad and Better Call Saul, played Golin Shel-la, who led the Ennis in battle on an episode of Deep Space Nine.

Candyman star Tony Todd (who has an unbelievable 192 credits) played Worf’s brother in four episodes of Next Generation and Deep Space Nine, he also popped up in other episodes of DS9 and Voyager as different characters and has a role in the Trek fan film, Axanar. According to rumors, Todd may have a role in the next Star Trek series as well.

King Abdullah bin Al-Hussein of Jordan played a non-speaking role when he was still just a prince in the Star Trek: Voyager episode “Investigations.” 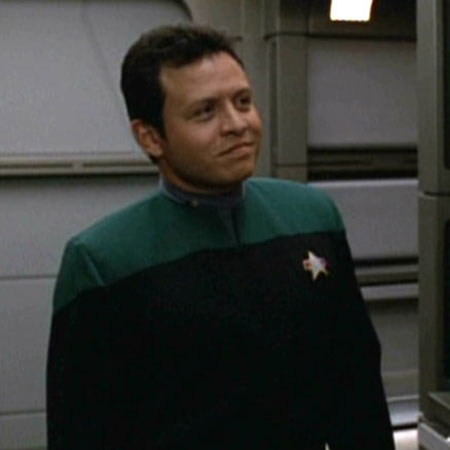 Lost star and habitual ’80s and ’90s guest star Terry O’Quinn played Admiral Erik Pressman, an old colleague of William Riker’s who appeared in one episode of Next Generation.

Andy Dick is best known for his work on NewsRadio (well… that and his off-screen antics) and most recently popped up on an episode of Love playing an exaggerated (maybe?) version of himself. Dick played an Emergency Medical Hologram on an episode of Voyager.

Parks and Rec star Adam Scott had a cameo that Ben Wyatt would have adored in Star Trek: First Contact when he played a crewmember on the Defiant who declares, “It’s the Enterprise!” while under attack. Such a nerd.

Another Parks and Rec alum, Jim O’Heir, popped up in an episode of Voyager. We can only assume that he wrecked everything.

Seth MacFarlane has given the world Ted, Family Guy, and a re-appreciation of Conway Twitty, but it’s easy to forget that he was once a young actor who made appearances in The Gilmore Girls and two episodes of Star Trek: Enterprise.

Seinfeld star Jason Alexander played Kurros in the Star Trek: Voyager episode “Think Tank.” Look at that thick luscious hair. Is that jumpsuit made out of velvet? 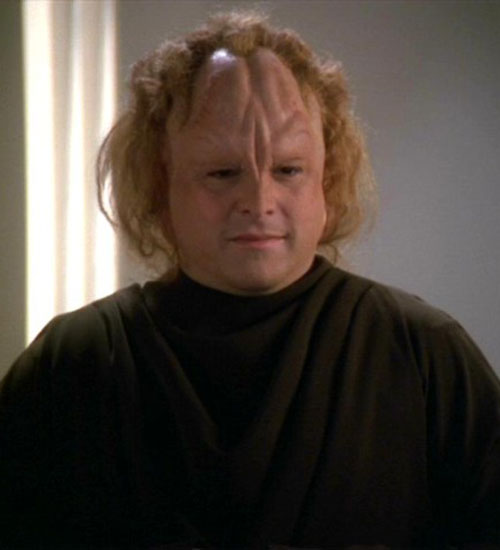 Christopher Lloyd, best known for his role as “Doc” Brown in the Back To The Future trilogy, played Klingon Commander Kruge in the film Star Trek III: The Search for Spock. 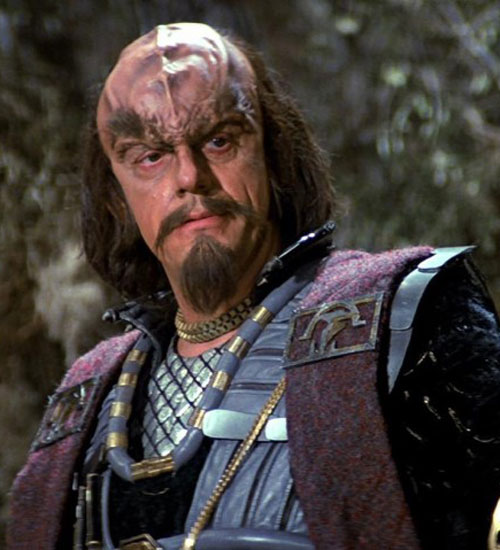 The Rock isn’t the only wrestler with Star Trek on his resume. The Big Show also made an appearance back in an episode of Enterprise.

As you probably know, Thor star Chris Hemsworth appeared briefly as James T. Kirk’s father in JJ Abrams’ first Star Trek film. Do not click the below clip if you’d like to avoid crying because of a Star Trek movie.

Saturday Night Live alum and Dead Heat star Joe Piscopo once appeared on Next Generation as a nightclub comic who tried to teach Data how to tell a joke. Here is visual evidence.

Tom Morello of Rage Against the Machine and Audioslave played an uncredited officer in Star Trek: Insurrection and a crewman in the Star Trek: Voyager episode “Good Shepard.” He also wrote the “Orchid” comic-book series for Dark Horse. 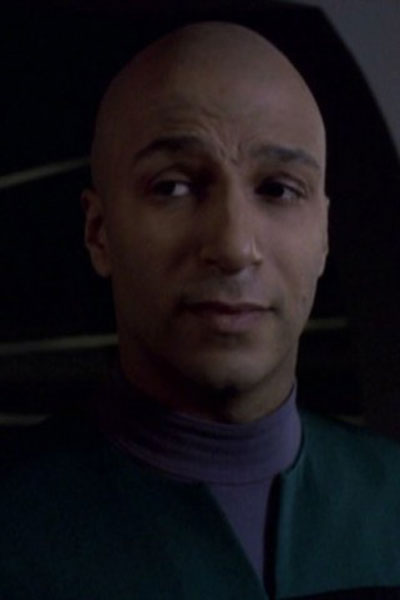 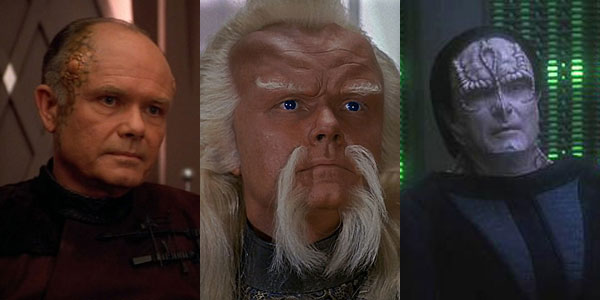 James Cromwell played multiple roles in the Star Trek franchise. Most notable was his performance as Zefram Cochrane in Star Trek: First Contact as the first human to create a warp drive.

Interestingly, Jonathan Goldsmith, aka “The Most Interesting Man In The World,” popped up ever so briefly as a red shirt in the original series. Though, I really don’t think you’re going tohave much luc noticing him what with William Shatner’s glistening chest in the frame.

Hellboy and live-action Beauty and the Beast star Ron Perlman is used to donning heavy makeup to play a role, so it’s no surprise that he’s barely recognizable as the Reman Viceroy in Star Trek: Nemesis.

Before he starred opposite Leo DiCaprio in The Revenant and Inception, and before he became a household name thanks to his work as Bane in The Dark Knight Rises, Tom Hardy appeared as a Romulan-devised clone of Jean-Luc Picard in Star Trek: Nemesis.

Bill Hader had a legendary run on SNL and he’s followed that up by throwing himself into a number of interesting live-action projects, but none of those can compete with the sheer coolness of the fact that Hader did voice work in both Star Wars: The Force Awakens and Star Trek: Into Darkness for director JJ Abrams. If you’re curious, Hader voiced a computer aboard the Vengeance.