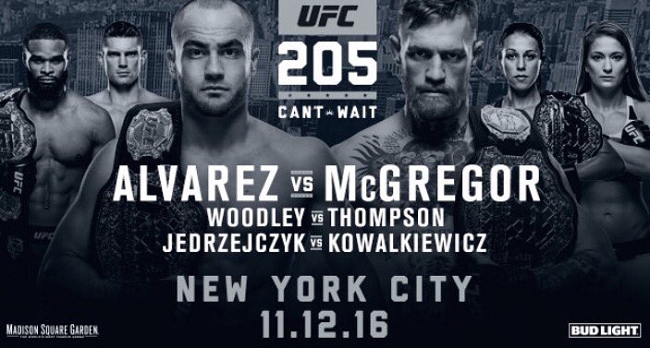 With three title fights, an absolutely stacked (if recently somewhat less so) undercard, and all the prestige and history of Madison Square Garden behind it, UFC 205 doesn’t exactly have to make the hard sell to earn your attention and/or money this weekend. It’s already broken the gate and attendance records for MSG, if Conor McGregor is to be believed, and will likely outdo McGregor’s UFC 202 bout against Nate Diaz as the highest-selling UFC pay-per-view of all time.

That being said, there is still some 7 hours before UFC 205 actually gets underway, and what am I supposed to do, just sit here playing toucbutt in the meantime? Yeah, nahhh. I think watching a compilation of awesome fights featuring the fighters of UFC 205 sounds like a much better idea, don’t you? Glad we’re on the same page.

There are few fighters in the UFC today with a more inverse proportion of cuteness to deadliness thank Karolina Kowalkiewicz. Maybe Sage Northcutt. The Polish striker may stand just 5’3″ and weigh less than Dwayne Johnson’s average bowel movement, but it cannot be understated just how many terrifying and unimaginable things she would be capable of doing to anyone one of us whether we liked it or not. Don’t believe me? Watch how she handled herself against “Thug” Rose Namajunas in her last bout. Watch how she digs her knees into her Namajunas’ torso again and again and try not to puke. Watch her eat punches like a goddamn cyborg. She will steal your heart with an adorable wink one minute and steal your soul the next.

Speaking of lovably Polish soul assassins, it doesn’t get much better than Joanna Jedrzejczyk. Does everyone remember how she verbally beheaded Carla Esparza before taking her title away at UFC 185? You don’t get to just come back from a complete annihilation like that. It’s like calling your friend’s new girlfriend by his old girlfriend’s name — you don’t try to correct it, you just swiftly make your exit, delete your Facebook page and start searching for jobs in a town far, far away, knowing that nothing you can do in your new life will ever be as embarrassing as that one fateful moment.

I’m rambling, but anyways, here’s Joanna Champion laying the whoop-ass on Claudia Gadelha in their championship rematch at the TUF 23 Finale.

In the lead-up to their fight at the TUF 23 Finale back in 2015, Jake Ellenberger couldn’t even wrap his head around the idea of being knocked out by the karate stylings of Stephen Thompson. “Karate, that’s funny” said Ellenberger in a now infamous interview, all but forcing the MMA Gods to descend from the heavens to deliver a karmatic crane kick right then and there.

Unfortunately for Ellenberger, there weren’t many laughs to be had once he was actually standing across from Thompson in the cage, as the undefeated kickboxer proceeded to go yard upside his head with a pair of spinning head kicks that would have made Ralph Macchio cream his jeans (gross).

Of course, one doesn’t need fancy hook kicks and flashy techniques when you possess the kind of power in your hands normally reserved for a Burt Gummer elephant gun blast. Enter Tyron Woodley, who entered his UFC 201 contest with then-welterweight champion Robbie Lawler a slight underdog who most expected to try and wrestlef*ck his way to victory. A little over two minutes into the bout, however, Woodley instead opted to just unleash a right hand from Hell and follow up with some of the most vicious ground-and-pound shots ever seen in the octagon, bringing a definitive end to the reign of one of the sport’s most beloved veterans.

There weren’t many people picking Eddie Alvarez to defeat lightweight champion Rafael dos Anjos when they collided at Fight Night 90 back in July, and for good reason. Though the former Bellator champion and DREAM standout had long established himself as one of the top fighters in the game by that point, Alvarez had earned his title shot after going just 2-1 against UFC competition, with both of those wins coming via split decision.

But it only takes one punch to change a fight, as they say, and for Alvarez, that punch came three minutes into the fight: a right hook that left his opponent on wobbly legs and looking for the nearest exit. Smelling the blood in the water, Alvarez swarmed dos Anjos and unleashed everything in his arsenal — uppercuts, hooks, and even a flying knee — until referee Herb Dean was eventually forced to step in and save dos Anjos from any further punishment. And just like that, one of the biggest upsets of the year was scored. Arguably better than the fight itself, however, was Joe Rogan and Joey Diaz’s reaction to it.

While Conor McGregor may promote himself as the hardest-hitting feather/light/welterweight to ever take part in the game, it was actually one of the only he fights he didn’t finish that remains his most memorable performance. I’m talking, obviously, about his rock-em sock-em rematch with Nate Diaz at UFC 202, which saw McGregor dominate in the early rounds, fade in the middle rounds, and then dig deep to pull off a majority decision win over his toughest opponent to date.

Aside from being the highest selling fight in UFC History, McGregor vs. Diaz II is easily a “Fight of the Year” frontrunner, so I’m just going to stop talking about how awesome this fight is and let you experience it for yourselves (if you somehow haven’t already).

Adamantly hyped up yet? Make sure to swing by Uproxx MMA to catch all the highlights of tonight’s surely epic UFC 205 card.