Is This 17-Year-Old The Future Of Old-School Hip-Hop?

by: Michael DeplandTwitter
Brought To You By
Honda
September 30, 2015

Welcome to the premiere episode of Uncharted, an UPROXX Original series highlighting the best artists you haven’t heard of, yet. With the support of our friends at Honda, we’ll be following some of the best emerging talent as they follow their dreams and make great music.

Hip-hop is possibly the largest cultural force on the face of the planet. Its fingerprints are everywhere: not just in art, but in politics, news, sports, food, business, tech — it’s in every aspect of our lives. So, if rap music’s influence is so massive, why are its origins not held in that same regard?

True cinephiles not only know the directors of today, they study the Truffauts and Goddards and Hitchcocks and Kubricks, even the Spikes and Spielbergs of more recent history. Maybe trendy foodies only look to what’s next, but true fans of haute cuisine look back to older gourmands and recipes as building blocks. From visual art, to rock ‘n’ roll, to television, to dance to theater, the past is equally important to what’s contemporary, if not moreso.

While there may not be a clear answer as to why hip-hop is the outlier in remembering its past, there are some people who want to shift that tide. One member of this new generation is Los Angeles’ own A-F-R-O. If you speak with the 17-year-old rapper, he’ll paint you a picture of modesty about how he’s just a young guy trying to stay humble and pay respect to those who he’s admired in the rap game all his life. And yes, that would be honest. But he knows that the art form is much larger than himself. 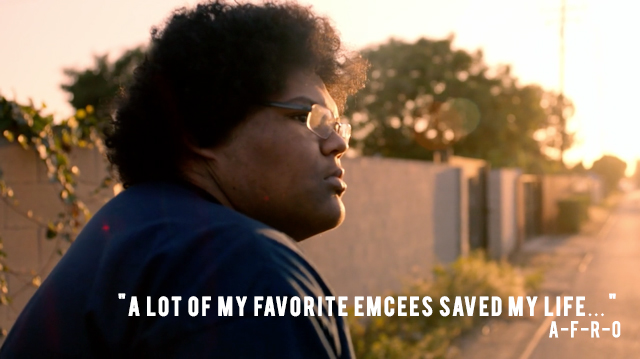 Rapping from as young as 11, A-F-R-O has truly spent his life preparing for the moment he’s about to embark on. “When I was 9, I heard Rakim, I heard the song ‘Microphone Fiend’ and that was the one where I was like, Damn I want to do that.” The young L.A. rhymer’s booming voice and backpacker swag is a potion concocted from years of dedication to and fandom of hip-hop’s originators.

Despite having never left Southern California until this year, it’s easy to hear the young kid’s influences, but there was one in particular who means the world to him. “R.A. The Rugged Man… he’s been my favorite since I was 13,” he told Uproxx of the New York emcee, who came up in the ’90s alongside the city’s other greats of the era. Though R.A. never experienced the commercial success of his peers, he is considered a vital part of hip-hop’s history. R.A. became aware of the young emcee when A-F-R-O entered a freestyle contest on YouTube hosted by R.A., and now the two are partners in restoring a pride and respect for the rhymers who built it all up. 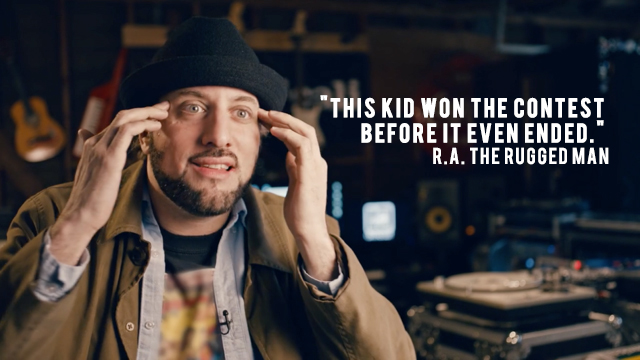 Both A-F-R-O and R.A. share a vision of what they want the future of hip-hop to look like, and it’s one that acknowledges the past with the honor they feel it deserves. “He makes all of us feel good, because a lot of 17-year-olds only know a lot of garbage that they’re being spoonfed on the radio,” R.A. said. “They don’t know the Rakim, DJ Premier, Kool G Rap, the GZA. So, when I introduce him to GZA and Kool G Rap and Premier in person and he knows their entire biography – stuff that they’ve done 10 years before he was born – they’re like ‘Wow, there’s youth out there like this. We’re not going to be forgotten. We’re being reborn into another generation, our music will live on through dudes like this.’ “

The young rhymer admits that, while he listens to some new artists, he prefers to immerse himself in the Golden Age of Hip-Hop. “I’m not really a fan of the new stuff, I recognize that some of them are pretty dope, but to me it’s the voice first thing of all, and I don’t really hear anyone new whose voice is really dope. I’m always a fan first. When I see legends as someone I look up to and other dudes will not see them as a legend like I do, it blows my mind. With these guys, they’re like superheroes – the OGs will always matter in hip-hop to me. For me, it’s a blessing even being in their presence. When they don’t get the love they deserve, it’s mind-blowing to me.”

“What makes him unique today is he’s got a big strong bass voice from the era that I enjoy, like Chubb Rock or Chuck D,” R.A. said, lobbying for more parity in hip-hop. “Where today, all the famous rappers have got little thin squeaky cornball voices. … This kid, he’s not into that. He comes in and he’s hard with his voice. He wants to knock you over with it. His voice is strong and his flow is where he can rap faster than any rapper on the planet Earth.”

But despite his mentor’s objections to what’s contemporary in hip-hop, A-F-R-O just wants to make good music, and above all else, the young kid wants to pay tribute to the legends who came up in the game before him. “There’s still OGs from back in the day who are still going hard today, if not even harder. When I hear Public Enemy drop an album and it’s still bananas, that’s crazy. They’ve been in the game forever. I don’t think hip-hop needs a savior. The music that’s been going on since the ’70s, we can still listen to that. Hip-hop never dies, so it doesn’t need a savior.”

While it’s true that perhaps one of the things that keeps driving hip-hop forward is its urgency and immediacy, stories like A-F-R-O’s show the exact beauty in elevating the art of the past. It’s not simply a reverence for what once was or a nostalgia for how it used to be. People aren’t nostalgic for Frederic Chopin or Freda Kahlo or Fred Astaire; they admire them for their breathtaking and astonishing contributions to their artforms. Maybe we’re finally getting to that point with hip-hop.

If musicians like A-F-R-O continue to elevate the art form’s history, the young rapper will be proven right: Hip-hop will never die, because its past will always be present.

If you’re dying for more A-F-R-O (and how could you not be?), check out his website.