Hot Take incoming: Two days is the perfect length of time for a music festival.

By cutting off a fest right when most are gearing up for a slog to the finish line, you avoid the Day 3 crash that comes after two long days of sun exposure, drinking and illicit drug use (or free sandwich bloat, if you’re a journalist). Made In America Festival in Philadelphia fully understands this, knowing that if you only give folks two days, then the turn up will be all the more real. And by the time that crash sets in, you’ll be safely nestled on an airplane and typing out a recap with your thumbs.

Too specific? Anyway, here’s the best of what I saw at Made In America.

Teens Get Off The Internet And Run The World

It’s easy to dismiss acts like Lil Uzi Vert and Lil Yachty as purely internet sensations for teens who Tumbled before they could walk. The rappers largely made themselves online and their music as well as their attitude toward the canon sounds like a pure distillation of Generation Whatever We’re Calling Post-Millennials.

But then you see them in person. You see Lil Uzi pull thousands upon thousands of drunk teens to the main stage and deliver one of the most hectic and vibrant sets of a fest with plenty of competition in that regard. 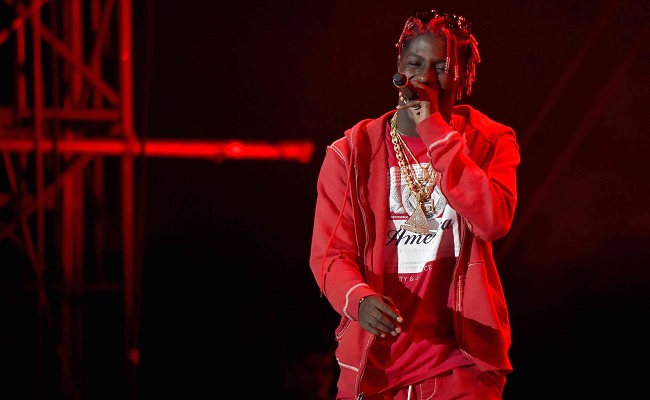 You see Yachty draw in an even larger crowd at a smaller stage where things get so hype that kids start crowd surfing trash cans full of garbage. You see Yachty come out 30 minutes late in a boxing robe to “Gonna Fly Now.” You see kids in kimonos and giraffe costumes and Hood By Air all losing their f*cking minds over a weird little guy with bright red twists. Most importantly, you see both young dudes rap for their lives.

You see all that and you just want to look an angry old head sharing anti-Yachty YouTube clips dead in his optic stems and hit him with a bit of updated Dead Prez. Sorry dude, it’s bigger than the Internet.

If Made in America had a through-line — besides “people that Jay Z really like (and also buy Budweiser)” — it was hatred of the stage. Throughout the weekend, acts eschewed the typical crowd-performer divide and got right into the thick of it.

The aforementioned Uzi left the main stage and circumnavigated the entire crowd in a mad dash, running through the VIP area to left of the stage, dropping down behind the concertgoers and sprinting all the way back around and up through the right side of the crowd, all the while being chased by fans looking for the most ? Snap imaginable.

Tory Lanez performed the entirety of his set from on top of the crowd. Occasionally standing straight up on the hands and heads of his supporters and climbing a road sign that got in his way.

And even acts that didn’t go for quite so much interaction got their shots in. Travis Scott cursed out the cameramen and tried to boot them off stage. And in a very #onbrand set, Jay Electronica spent a bit of time in the crowd, said that Bush did 9/11 and that the levees in New Orleans were intentionally blown up and then incited a mini-riot when he told the crowd to jump the barrier and get on stage.

He asked the hundred or so concertgoers who made it up to jump on the stage until it breaks and got his mic cut for his troubles, with police dispersing the crowd with a high-pitched siren. Though fans did get a chance to hear “Exhibit C” the next day when DJ Khaled brought out Jay to close his set.

FKA Twigs was the only set to legitimately give me chills. The British singer sounds and moves like Janet Jackson if Janet were a extraterrestrial princess from an Edgar Rice Burroughs novel.

She performed her entire set surrounded by a cult of dancers, all worshiping and fighting over a mysterious rock, contorting and snapping their bodies with a precision that you only expect from top-tier shows. But where pop stars offset their precision with an “aw shucks, I’m just a regular Joe and I love you all” openness, Twigs uses her talent to project coldness and a futuristic mechanical otherness.

I can’t say that I’m smart enough to completely understand the story of FKA Twigs’ stage show, But she hooked me nonetheless. I was catching flies the entire show and when she snatched the moon rock/idol from an entranced cultist dancer, I audibly gasped and felt no shame.

And it certainly didn’t hurt that she peppered her songs with enough bass to peel the flesh off of your bones like the playground-goers in Terminator 2.

If aliens are coming (and FKA Twigs has me convinced that they are), then Jamie XX should stand as our representative. His impressive light show tucked away from the headline stage looked like a lone man making the case for Earth via a selection of our movingest dub, reggae Afrobeat and dance music. He started the set bathed in white light from all directions, like a man on the world’s most important stage. The alien onlookers beamed down their white spotlights, ready to hear why they shouldn’t wipe us off the galactic map and Jamie happily obliged.

As Jamie went on, the spotlights became a freakout of track appropriate colors (I can’t say why this song sounds green, but it just does ). The songs got more and more frantic as Jamie did his best to impress our alien overlords and it looks like it worked. The last few songs sounded like a coronation, closing with a take on unrelentingly uplifting “Loud Places.” It was so ridiculous and joyous that if Jamie lifted off the stage and turned into a beam of light to match his stage set, it’d likely be met with a nod and a “seems about right” from the crowd.

It might be time to retire those battery-chucking stories, y’all. Philadelphians are amazing. It’s weird that a highlight of the festival could be the people who call its host city home, I know, but hear me out. Rather than the typical tourist hostility you get from citizens of cities with longer running and larger festivals, Philly folks seemed generally happy that their city was doing big things.

I sat down in the grass maybe three times the entire festival and every time a Philadelphian came and sat down next to me. Most were just asking if I needed water and how I was enjoying Philly, but one particularly interesting woman told me she was a former DJ, showed off her tattoos, put me on her Snapchat story, kissed me and ran off because she was late for Bryson Tiller all within two minutes.

Despite that, I have to give the title of Favorite Philadelphian to the dude playing flute inside City Hall. He switched effortlessly between “America” from West Side Story to “I’m Different” by 2 Chainz. He played the outro from The Boondocks as well as he did “Por Ti Volare.” Made In America Fest was decidedly hip-hop and R&B focused, but that guy knew the value of casting a wide net.

That’s not to say that there’s anything wrong with Made In America’s focus. In fact, it’s probably necessary. If anything, MIA proved that hip-hop can carry a major festival that isn’t Hot 97 Summer Jam.

Now that might sound obvious. Rap has long been the lingua franca of popular music and wellspring of Songs Of The Summer. Why wouldn’t it be able to serve as the focus of a major fest? But take another look at the other big-name destination festivals of the summer.

Bonnaroo was headlined by Pearl Jam, Dead & Company and LCD Soundsystem. Lollapalooza was headlined by Radiohead, Red Hot Chili Peppers and (again) LCD Soundsystem. Compare that to Made In America leading into Rihanna with a 2 Chainz and Lil Wayne set. Take a second and think about how odd it is that Travis Scott’s sidestage crowd was larger than the one pulled by walking summer-festival-sweet-spots Edward Sharpe and the Magnetic Zeroes on a larger stage half an hour before. (And the best moment of their set was a freestyle rap from an audience member.)

Those kids at the Yachty, Uzi and Playboi Carti sets will eventually get to a point where they’ll clamor for their own Dead & Company, their own Pearl Jam. And the festival sets that produces will be as unrecognizable to the current crop as the new-school rappers that filled the ranks of Made In America are to folks who grew up on Run-DMC.

We aren’t there yet. This festival did close out with a set from Coldplay, after all. But the fact that Chris Martin’s stage-warmers were a wildly popular mixtape DJ and Chano From 79th tells me we’re well on the way.