These Are The 25 Best Songs By The Replacements 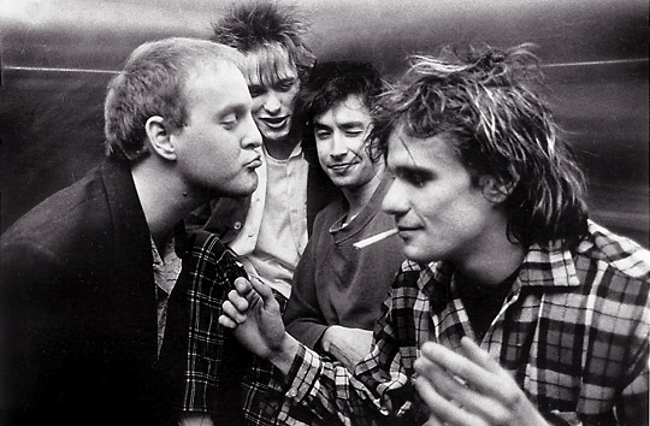 It has been 25 years since the release of All Shook Down, the final album from The Replacements. In the minds of many, it’s not even really a Replacements album, as it’s basically a tweaked version of an intended Paul Westerberg solo album.

However, before that inauspicious ending to The Replacements’ run, they were a great band whose sound ranged from ragged, edgy punk to horns infused pop rock. We will more than likely never see The Replacements recording again, as they are almost assuredly broken up for good. But in honor of the end of their run, and Westerberg’s December 31 birthday, here are their best songs: 25 of them for the 25 years since All Shook Down.

Sorry, Ma, Forgot to Take Out the Trash

The Replacements released their debut album in 1981. At the time, they were very much a Midwestern punk band, and that’s the sound of Sorry, Ma, Forgot to Take Out the Trash. That’s also a title indicative of their general youth at the time. Their influences are worn on their sleeve, in their sound, and in song titles such as “Johnny’s Gonna Die,” about Johnny Thunders, and “Something to Du,” spelled as such in honor of fellow Minnesotans Husker Du.

It’s a solid album, not a poor man’s Ramones, but probably a middle class man’s Ramones. Two songs from this album, “Hangin’ Downtown” and “I Bought a Headache” make this list. Both speak to a certain youthful dissatisfaction that colored their lyrical content at the time.

“I Bought a Headache”

Stink is an eight song EP that came out in 1982, between Sorry, Ma and their next full length album, Hootenanny. Despite its limited running time, no song is longer than 2:50, and that is the album opener “Kids Don’t Follow” which begins with an extended scene of cops breaking up a party, two songs make this list. They are “Stuck in the Middle” and “Go.” Not included is “F*ck School,” which loses its resonance after you turn 20.

“Stuck in the Middle”

Hootenanny is still decidedly a punk album, but definitely feels less derivative of their old work and more original. The sound expands a bit, and that is represented by both songs from this album on the list: “Color Me Impressed” and album closer “Treatment Bound.”

Hootenanny features a song, “Mr. Whirly,” that is credited as “mostly stolen,” as it is a riff on The Beatles. They took that to the next level with Let It Be, the first of their “classic,” critically adored albums. It’s a very good album, the second best in their catalog. It opens and closes with two of their better songs, “I Will Dare” and “Answering Machine,” and “Androgynous” is a catchy little tune, as well. “Unsatisfied,” though, is the cream of the crop. Let It Be also marks further evolution of their sound. Case in point, while their first two albums are labeled as “punk” on Wikipedia, this album is labeled as “post-punk, indie rock, alternative rock.”

Tim is the midpoint for who The Replacements were and who The Replacements would become, balanced in perfect harmony. It’s a great album, an almost decidedly close to being all killer, no filler. Their best, and probably most iconic, song, “Bastards of Young,” is off this album. That’s only the beginning, though. There’s also “Kiss Me on the Bus,” “Waitress in the Sky,” “Swingin’ Party,” “Left of the Dial,” and “Here Comes a Regular.” Yes, “Waitress in the Sky,” is kind of dickish to flight attendants, but it’s also kind of funny. “Left of the Dial” is great. “Here Comes a Regular” is a rather somber (even maudlin) affair, but damned if it isn’t pretty.

“Kiss Me on the Bus”

“Waitress in the Sky”

“Left of the Dial”

Pleased to Meet Me

Pleased to Meet Me is classified on the internet as a “punk jazz” album, which is a very silly thing to call any album. What it is, regardless, is a top notch album. The “punkness” of The Replacements was basically gone by this point, but they still sounded great. “Can’t Hardly Wait” has horns on it, after all. They sound awesome, to be fair, and that song is the best of this group, but if you liked the snotty punk of early Replacements, then maybe this wasn’t your thing. “Skyway” was probably towing a line that later songs would cross in terms of sentimentality. There’s also “Never Mind” and also “Alex Chilton,” an ode to the frontman of power pop legends Big Star.

Bob Stinson is not featured on Don’t Tell a Soul, having been replaced by Slim Dunlap due to Stinson’s drug issues getting the best of him (he would pass away in 1995, at the age of 35). This is not a punk album. It’s not even, necessarily, a good album. It does have a few of their better songs, though. Call this a hit-or-miss outing. If it were only 24 years since All Shook Down came out, “Asking Me Lies” probably wouldn’t have made the cut, to be honest.

Replacements fans, by and large, do not like All Shook Down. Is it the least of their outings? Probably, but don’t take that as a major criticism. There’s a funny thing to All Shook Down. Every song basically amounts to, “Hey, this is a decent song.” None of the songs are bad, really. On the other hand, none of the songs are good. That’s why none of them made the top 25. Also, listening to all these albums in short order creates a real dissonance. They don’t sound like the band from Sorry, Ma on All Shook Down at all. They went from something vaguely Ramones-like to something vaguely Springsteen-like.