This week’s episode of The Walking Dead, directed by Greg Nicotero, “What Happened and What’s Going On,” was not only one of the more depressing episodes of the series, featuring one of its saddest deaths, it was also one of the more artistically directed. The Walking Dead occasionally layers in Easter Eggs and cool details, but it did so much more frequently in this week’s episode. There were some really cool details that, if you weren’t watching (or listening) to closely enough, you may have missed.

1. The voice you hear on the radio broadcasts in the mind of Tyreese is actually the voice of Andrew Lincoln, in his natural accent. What we are hearing, most likely, is not reports about the zombie outbreak, but sadly, radio reports about the Rwandan genocide.

“At least 68 citizens of the republic have been killed in four deadly attacks along the main coastal district. The group has continued their campaign of random violence, moving across the countryside unfettered with the republic’s military forces in disarray … There have been troubling reports of cannibalism having broken out in refugee camps along the republic’s transportation corridor. And despite the string of victories by rebel forces, there are disturbing reports of increasing the brutality of their tactics including the wholesale destruction of villages, burning down local prisons, targeting of civilians, and even the widespread mutilation of children and young mothers.”

How messed up is that?

2. I was trying to figure out the significance of Noah getting nicked in the forehead on the barbed wire near the beginning of the episode, wondering if it was a bit of foreshadowing: 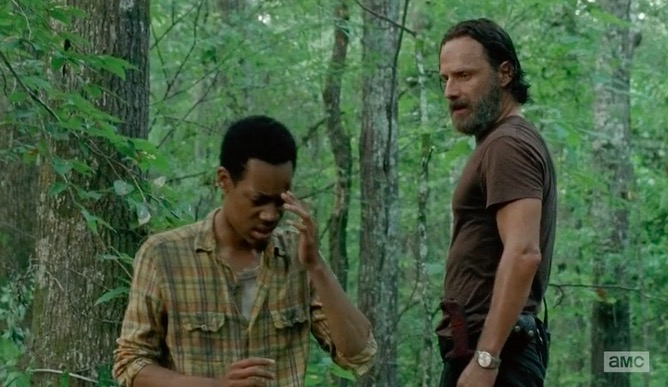 More likely, however, director Greg Nicotero was clueing us into the fact that the opening sequence was a flash-forward, as you can see that Noah’s forehead is nicked there when he is weeping over what we originally believed to be the burial of Beth, but as we later learned, was in fact the burial of Tyreese. 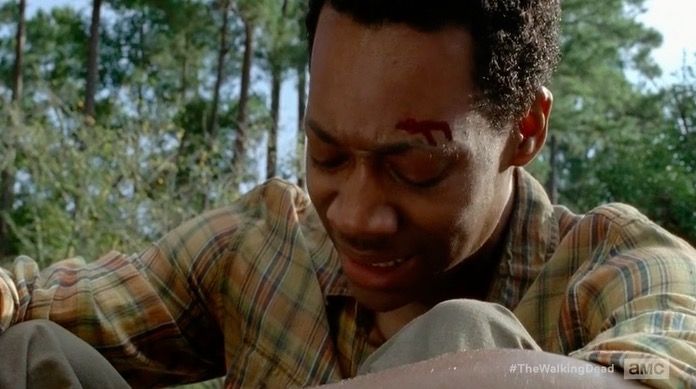 3. As I wrote about elsewhere, there are several references to wolves, including most noticeably this graffiti behind Michonne.

There is also a very brief shot of the survivors being attacked by what looks like wild dogs or wolves in the “Next on” promo (at the 24 second mark):

4. You might have also noticed a few pictures of dogs in the bedroom of Noah’s walker brother. Here’s one above the head of Tyreese:

Here’s another next to The Governor:

The ‘W’ on the foreheads of the dissected walkers may also be a reference to the Wolves, or possibly to The Whisperers, a group of survivors from the comic series that we have not yet met in the television show. It’s possible, too, that the Whisperers run with wild dogs/wolves. 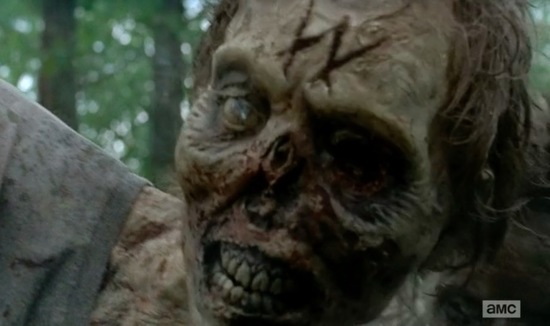 6. When Tyreese first sees visions of Lizzie and Beth, there is blood from their death wounds.

When Tyreese asks Bob to turn off the radio and he accepts his fate, those wounds are no longer visible. 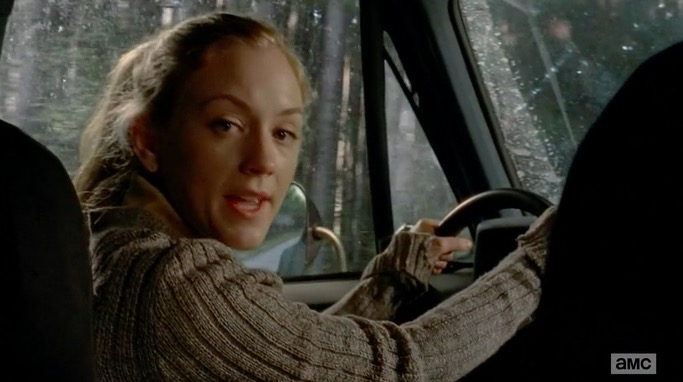 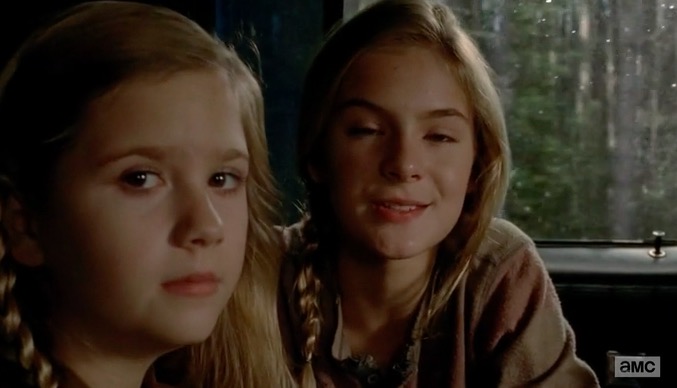 7. Make of it what you want, but there was definitely something to the fact that, when Tyreese peered into the doorway here, he was seeing Noah’s reflection in the shattered glass.

The shots of Glenn holding and using a baseball bat are almost certainly allusions to his death in the comic book series by Negan, who smashes Glenn’s head in with a bat.