Many of the complaints about True Detective early on this season centered on how bleak and oppressive the series was, and how it lacked any of the levity that Matthew McConaughey and Woody Harrelson occasionally brought to the first season. Last night’s episode of True Detective, “Church in Ruins,” however, was another in a series of episodes that demonstrated that True Detective can be very funny, if you watch it the right way. The humor may not always be intentional, but as a show to watch with others — either in real life or online — you have to admit that it’s been a lot of fun.

Take, for instance, the opening scene between Ray and Frank over the breakfast table, with the two holding a gun on each other. That sequence — in which Frank convinced Ray that he didn’t intentionally mislead him about the identity of his ex-wife’s rapist — included a lot of great gems that straddled the line between faux-profound and laughable.

“I sold my soul for nothing,” Ray said to Frank. “If you were selling, I wasn’t buying.”

“If that’s the sort of thing that keeps you out of heaven, I don’t want to go.”

“I didn’t set you up, and I ain’t your suicide ticket.”

“On the ropes ain’t the same as bleeding out.”

The best line of that sequence may have been the last, because it was also so very true:

“You might be one of the last friends I got,” Frank said to Ray.

But the comedic high point of the episode had to come with Ray’s visit with his son (under supervision). Chad basically ignored Ray, the model airplane that he brought, and insisted, instead, on watching Friends.

All due respect to Blake and Chessani, and with no offense to the actor who plays him, but I think we can all admit that Chad is the worst person on True Detective. Ray just wanted to spend some quality time with his son, but all Chad wanted to do was watch Joey eat a sandwich.

“Whatever they say, whatever things you hear, I am your father. You are my son. And I will always love you.”

“I just murdered your mother, the town is burning to the ground, and zombies are overriding the planet.”

Awful kid. YOU ARE THE WORST, CHAD. No wonder Ray went on the bender to end all benders, before destroying his house and conceding custody to his ex-wife. After five minutes with that little sh*t, I’d look like this, too:

And then there’s Stan. Frank met with his widow and child, and the only thing those scenes seemed to do was to remind everyone that they have no idea who Stan is.

Now, more than ever, Who the Hell is Stan on TRUE DETECTIVE? http://t.co/teQJNhuNCM

What did we learn from that sequence? That Blake had also met with Stan’s widow and child. What else did we learn? That Stan’s kid really needs a playdate with Ray’s kid.

We also know that the wife and kid of Frank’s henchman live in a much nicer place than where Frank lives now.

Beyond the unintentional comedy of the first 40 minutes, however, nothing really got going in the episode until Frank nearly had a “Mexican standoff with actual Mexicans.”

The name of the Mexicans? Gonzales. We met them last week, and their name is seriously “Gonzales.” As in, the two come as a set with only one name. “We are Gonzales.” They’re like a boy band. Here’s their album cover:

Gonzales led Frank to Irina, the woman who pawned off the goods that led the police to Ledo Amarilla. Then they slashed Irina’s throat because they’re bad men. 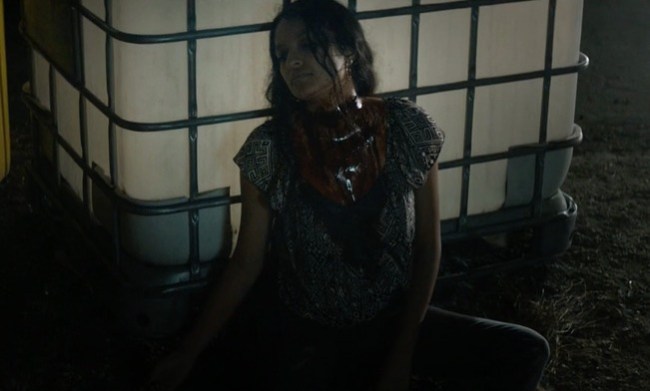 However, before that, we did learn that Amarilla — as expected — had nothing to do with Caspere’s death. A “thin, white cop” paid Irina to pawn those goods. I think we ALL know who she was talking about, too.

It was Kevin Burris. In fact, at this point, I think there’s practically enough evidence to shut the book on this one. Burris killed Caspere. The biggest question remaining is why.

I still maintain that it was to protect this man, on the right.

That’s Attorney General Geldof, who’s running for governor, and who has every reason to keep that hard drive out of the public’s hands.

The less satisfying solution here is that it’s one giant conspiracy between Geldof, Burris, Osip, Blake, McCandless, and Chessani (father and son). After all, we also found out that Osip cut out Semyon as his middle man, and he and Catalyst CEO McCandless are now partners.

The grand conspiracy can also be supported by the worst line and the most laughable line reading of the entire night: 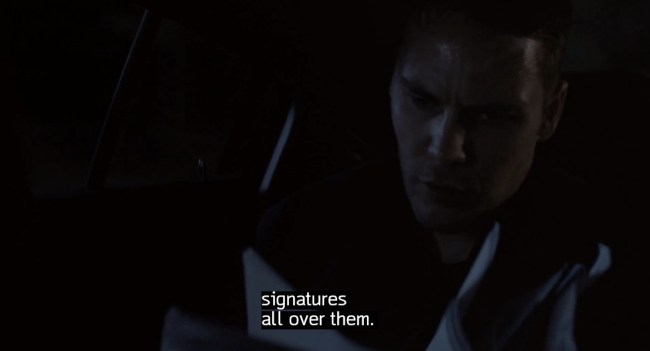 The contracts! There are signatures ALL OVER THEM. The case is BLOWN WIDE OPEN!

The most likely scenario: Burris killed Caspere to protect Geldof. Caspere, McCandless, Tony Chessani, and Blake were all in cahoots to use that hard drive to get others — like Geldof — to sign the land deal contract, so they could all make millions on the high-speed railroad.

At this point, I guess, the more interesting mystery is the identity of the guy who took Ani back to his rape van when she was a girl.

Have we seen that guy before? Yes, I think we have.

He was in league with Pitlor, Ani’s dad, and Chessani back in the day.

The other question that remains: Who are these kids? More importantly, why should we care?

That’s just one more layer in a season that’s already piled with unnecessary layers. At this point, HBO’s biggest selling point — the reason not to abandon a show you’ve already been watching through six episodes — is this: