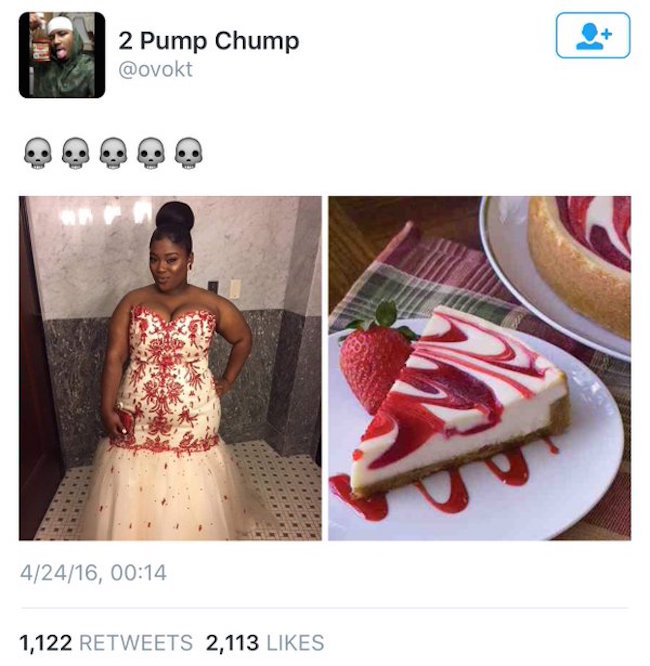 Backup, bread! It’s cheesecake’s time to shine! Last week, women in Japan comparing their chubby wubby baby’s arms to pull apart bread was all the rage. Now the spotlight shifts to cheesecake, nearly two months before National Cheesecake Day. So, what gives? The delicious dessert is being used to tackle fat-shaming.

Twitter user “2 Pump Chump” tried to fat shame an overweight high school student by likening her gorgeous prom picture to a strawberry cheesecake. While he says he meant the young woman looked “good enough to eat,” others felt the meme was born out of malice because of the “dead” emojis he used. For anyone old enough to remember when Morgan Freeman was young, using the “dead” emoji typically means you laughed so hard that you died. Kids and their dumb ways of communication, right?

Anyway, thanks to to Twitter user @SpokenELLE, #CompareYourselfToCheeseCake2016 is turning the negative meme into a positive. “This asshole compared a girl to a cheesecake so now we’re all comparing ourselves to cheesecake ? join us,” tweeted Elle about the movement.

And that’s exactly what people are doing — posting side-by-side pictures of themselves and yummy cheesecakes as an F-U to the “assh*le” who inadvertently started the trend. And who knew so many people looked like cheesecake?! Strawberry, blueberry, chocolate, multi-colored. Cheesecake galore!

Prince and I have the same favorite color ? #compareyourselftocheesecake2016 pic.twitter.com/Ok5cUvl4hZ

Im just gonna repost this with the hashtag because I forgot it the first time ? #compareyourselftocheesecake2016 pic.twitter.com/Zg9ad8yv3s

Okay, it’s a response to fat-shaming, but is anyone else feeling a little ravenous?