Hoodies, those comfy, cozy closet staples we all have emblazoned with the names of our colleges, adorned with our favorite TV shows or designed to look like you skinned a Wookie, could soon be illegal in Oklahoma thanks to a proposed amendment to an existing law originally created to combat the Ku Klux Klan.

The existing law bans wearing a hood or disguise during a crime, something that seems like common sense. The amendment, courtesy of Senator Don Barrington, would make it illegal to “hide your identity in public.” Or, in more real-life terms, wear a hooded sweatshirt or jacket, or one of those swell Groucho glasses with the mustache attached. According to Sen. Barrington:

“The intent of Senate Bill 13 is to make businesses and public places safer by ensuring that people cannot conceal their identities for the purpose of crime or harassment…Similar language has been in Oklahoma statutes for decades and numerous other states have similar laws in place.  Oklahoma businesses want state leaders to be responsive to their safety concerns, and this is one way we can provide protection.”

So, yes, that thing you wear on laundry day, or when it’s slightly chilly out but not cold enough for a jacket, or any other of the myriad reasons to sport a hoodie, would now incur a $500 fine.

But I’m going to go out on a limb and assume this law won’t be enforced for just anyone. Because we can giggle at the out-of-touch politicians banning sweatshirts, but this could have massive implications for legally harassing only specific individuals. Ones who have been legally killed for simply wearing hoodies in the past.

This whole thing seems familiar. Upsettingly, sadly familiar, in the way a lot of 2014 was upsetting and sadly familiar. In fact, let’s go back to 2012 and let Colbert handle this one. Never forget: 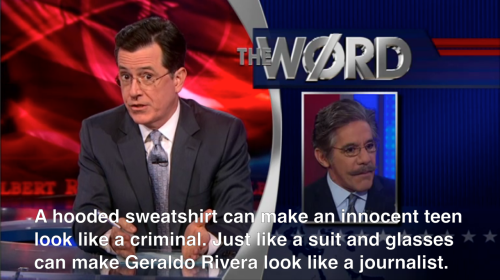