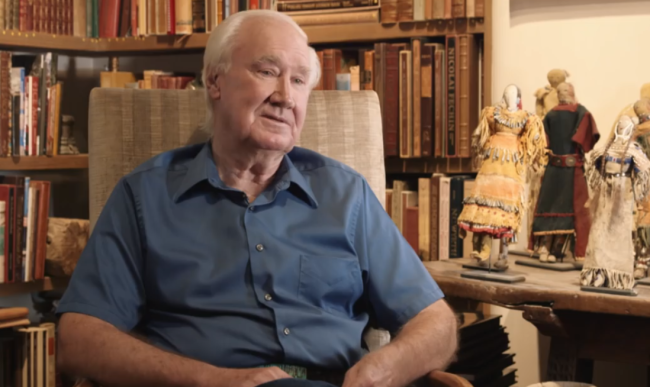 The millionaire New Mexico author and art collector who buried a treasure chest somewhere in the United States five years ago, and then started dropping clues about its location to people all over the country with free time and dollar signs in their eyes, says he did it because you idiots won’t put down your phones.

New Mexico ABC affiliate KOAT caught up with the treasure burier, 84-year-old Forrest Fenn, to see how he felt about his booty — 265 gold coins valued somewhere in the ballpark of $2 million — still being out there a half-decade after he first published clues in his best-selling book, The Thrill of the Chase.

“Somebody could find it tomorrow and it may not be found for a thousand years. I’m looking at the big picture. A lot of people who are searching for the treasure don’t see it the same way I do. I would love if someone found it tomorrow but if nobody found it for a hundred years, that’s okay with me too.”

Thousands of people have searched for the treasure since it was hidden, and, according to Fenn, some have even gotten very close to finding it. Like, within 200 feet. And if hearing that news whets some appetites and gets more people motivated to hunt for it, well, that’s fine with him because that was the point all along.

“I wanted the monetary value to be a consideration for those who are looking for it, but mostly my motive was to get kids off the couch and away from their texting machines and out in the mountains.”

There are assuredly many more productive things one could do with $2 million in gold coins (give them to a museum, auction them off and donate the money to charity, give them to me), but there’s something endearing about a rich old Western coot who calls cell phones “texting machines” burying a fortune somewhere in America for the sole purpose of convincing teens to leave the house. If you’re gonna be rich, might as well be weird as hell about it.