What Are All The Memes In The New Truth Commercial?

Last weekend, Truth Orange unveiled a new anti-smoking commercial to add to their “Finishers” campaign. The ad, titled “It’s A Trap,” ran during the VMAs with the purpose of appealing to the young folks with their use of some rather outdated internet memes. Still, within just a week, the advertisement has caught on like wildfire — but seriously, don’t smoke kids — causing older folks like myself to look back on those good ol’ internet days when Admiral Ackbar’s endearing sense of space panic allowed him to rise above the ranks of his Star Wars brethren to achieve his own quirky sense of web-celebrity.

While the Star Wars meme in question does not appear anywhere on-screen — Truth Orange can’t afford them Disney rights, son — a bunch of YouTube personalities are featured throughout to, you know, successfully reach that highly coveted millennial demographic, or something. But anyway…

You’re probably wondering what all the memes in this new Truth commercial are. Well, I’m glad you asked because we have got the answers you seek.

The Conspiracy Cat meme first hit the interwebs back in 2012 which — as you’ll see from some of the other kooky items on this list — is one of the more relevant memes to be featured in Truth’s new commercial. And while they definitely got the feline’s look down, it feels like they may also be throwing in a little Dramatic Chipmunk for good measure.

Back in 2012, a girl by the name of Laina Walker took to YouTube with a webcam video titled “JB Fanvideo” where she performed her own parody version of Justin Bieber’s song “Boyfriend.” Here, Walker sings her own lyrics all wide-eyed and crazy looking for the video, which apparently was in response to an online sing-off contest promoting Bieber’s perfume by the same name.

Needless to say, the video caught on quick with over a million views within its first 48-hours of existence. Soon, the Overly Attached Girlfriend meme was born causing Walker to become a an internet celebrity almost overnight. 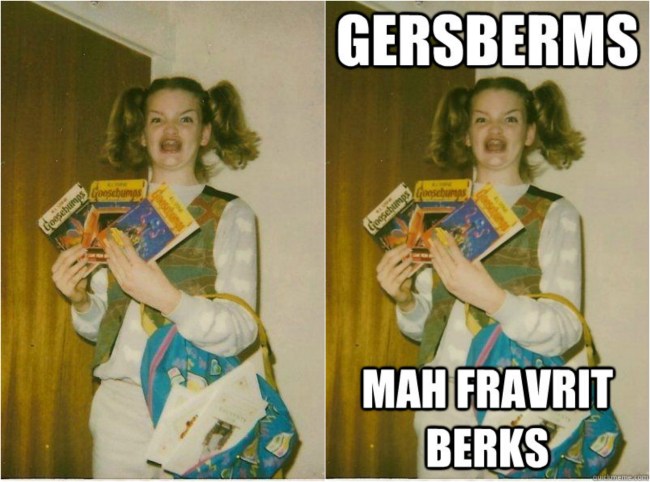 Geez, it really seems like Truth took a liking to memes from the year 2012 as the next one on the list is ERMAHGERD. In March of that year, the above left image was posted to reddit depicting an excited retainer-wearing girl clutching a few Goosebumps books. The post in question was titled “Just a book owners smile…” and after a commenter’s Quickmeme skills were put to use, the above meme took shape.

A Puking Rainbows trend rose in popularity in the online comics space sometime around 2006.  Still available to view today, an official website was created to celebrate all the artwork depicting rainbow vomiting in all its glory.

Four years later, YouTube Channel FilmCow delivered the now classic web series Charlie the Unicorn to the world. In a video titled “charlie teh unicron episode 1,” the artist made reference to the craze by making one of the animated unicorns puke all of the colors.

And thusly “Rainbow Bleh” was born.

In 1793, a strange self portrait of French artist Joseph Ducreux was created. Here, the creepy bastard is shown creepily pointing at the viewer. Over two centuries after his existence, the above painting was turned into a rather entertaining meme which translates hip hop lyrics into the archaic rap statement before you.

“Disregard Females, Acquire Currency” takes on Notorious B.I.G’s 1995 track “Get Money,” as well as 2005’s “Money on My Mind,” by Lil Wayne. Since it’s humble beginnings, Joseph Ducreux’s Archaic Rap meme has gone on to misrepresent all sorts of street lyrics, you know, for the discerning French gentleman with that 18th Century swag.

On April 19th, 2010, an image of a cute seal photobombing a group of penguins spread rather quickly across the internet. Soon, the demand for more seal-bombing took hold and a Tumblr page was created to appease the masses. No one was safe from the Sealbomber, who ended up taking on everyone from President George W. Bush to everyone’s favorite pockmarked singer named after a species of be-whiskered Pinnipeds. It’s Seal, people. I’m talking about Seal.