‘Jurassic World’ Is The Second Best Movie Of The Franchise, By A Long Shot 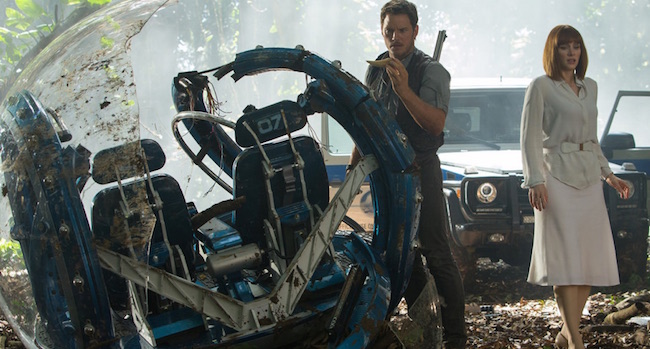 Jurassic World is the second best movie in the Jurassic Park franchise.

At the same time, that above sentence says both nothing and something. It says nothing because claiming that Jurassic World is the second best movie of this franchise is faint praise since not many people think very highly these days of The Lost World or Jurassic Park III. But it says something that even Steven Spielberg, who of course directed the classic original film, couldn’t even direct a worthwhile sequel. It says something because the Jurassic Park movies may just be the least likely action franchise to spawn, so far, four movies. This is not a story that’s really meant for multiple movies, yet here we are.

There are many reasons that the first Jurassic Park is a wonderful movie. When it was released, the price of admission was to see the realistic-looking computer-generated dinosaurs. Up to that point, nothing quite like that had ever been seen before. It was truly remarkable. The reason that, today, Jurassic Park is still held in such high regard – despite the fact that in 2015 it’s impossible to impress anyone with CGI – is that it’s an expertly self-contained story about an adventure that really could only happen one time … for us and the characters.

Look, who wouldn’t want to get a behind-the-scenes tour of a new theme park with real life dinosaurs? Richard Attenborough seems nice and competent enough, it’s probably realistic to think that a person could visit this island and return without being eaten by a dinosaur (despite the fact that a person being eaten is why they are all there in the first place – but, still). I mean, at least this nice man in charge says it will be fine. And, to be fair to Mr. John Hammond, if it weren’t for a corrupt employee (well, and some confusion about how frog DNA works), things would have probably gone just fine.

But why, in the sequels, anyone would continue to put themselves in these situations is beyond the scope of basic human logic. And, because of that, it’s really hard to feel any empathy for these people in the second and third installments because, well, YOU KNEW WHAT YOU WERE GETTING INTO, IDIOTS!

The second and third Jurassic Park movies remind me of that SNL sketch where person after person keeps jumping into the polar bear pit, and each person who jumps in is immediately eaten.

Colin Trevorrow’s Jurassic World does a nice job of resetting the stakes of why anyone would ever want to visit an island full of dinosaurs. By this point, the Jurassic World of the movie – a blustering, successful theme park set on the same island that the original Jurassic Park took place – is already established as “a place to go.” It would be like being scared to go to Disney World because a few people died during the construction of a new ride 22 years ago. (To be fair: to think like this, you really do have to just ignore that The Lost World ever happened. There’s no way that a T. rex shows up in San Diego, resulting in mass destruction, and anyone says in the next 100 years, “I want to travel to where those things live, for fun.”)

But, again, this is a franchise movie about a place, not people – a place where things consistently go amiss. It’s not like these movies are about a specific person or group of people, and in the sequel we get to see these people go on new adventures. It is, consistently, about getting people — that we are told are smart – to, once again, come to an island full of blood-thirsty dinosaurs. In the case of Jurassic World, I finally bought into why someone would want to go there. That’s a huge obstacle.

The night I saw Jurassic World, I later tried to explain to someone the plot of the movie and I started listening to the sound of my own voice. The more I listened to my voice, the more I sounded like a crazy person as I got deeper and deeper into the plot. “Then Blue has to make a decision on what team he wants to fight for,” were words that I said out loud. Blue, I should mention, is a Velociraptor.

Chris Pratt plays Owen Grady, a Velociraptor trainer, a job that sounds a lot dumber than it’s depicted in the film. That image of Pratt zipping along on his motorcycle, surrounded by his Velociraptor buddies is not at all as it plays out in the context of the film. The Velociraptors have been trained to understand some basic commands, but they are still extremely dangerous and Pratt’s Owen Grady isn’t exactly just hanging out with them. They don’t do tricks. He’s still pretty terrified of them.

Of course, this being a Jurassic movie, something does go horribly wrong. (Though, I’d love, just once, if a tagline for a Jurassic Park movie were, “In a world where everything has gone terribly wrong … what if it went right?” Then the whole the movie is just people petting the nice dinosaurs that don’t eat people, set to the music of fun.) We are told by Bryce Dallas Howard’s Claire Dearing, the park’s manager who just happens to have her two nephews visiting, that business slumps unless they keep genetically engineering bigger dinosaurs. So, the park’s scientists do a lot of gene manipulation and come up with something called the Indominus Rex.

The Indominus Rex is a gentle creature who enjoys fresh fruit and belly rubs. That last sentence is a lie. The Indominus Rex likes eating human beings and, of course, it escapes and threatens the lives of all the visitors on the island.

In a lot of ways, Jurassic World reminds me of Terminator 2: Judgment Day. The thing we were rooting against in the first movie (the T-800 Terminator, the T. rex, the Velociraptors) now have new models that are even more dangerous, so now we find ourselves rooting for the old model against the T-1000 and the Indominus Rex. (Yes, the same T. rex from the first Jurassic Park is in Jurassic World.)

The big difference is, Terminator 2: Judgment Day had something new to say. Jurassic World is just a bigger version of the better original – a trope that the movie is obviously aware of and embraces, in an almost ironic kind of way that makes me wonder if the movie actually hates itself? – but it’s really hard to condemn Jurassic World for any of this. That’s what these movies are: People show up on an island to see dinosaurs; people get eaten by dinosaurs. There are only so many scenarios that can be created to make sure this happens, as even Spielberg found out with The Lost World. So, given these confines, Trevorrow has made a movie that is very entertaining, even when it feels familiar. It’s pretty much exactly what you think it will be, and honestly, is a little better than it even needs to be.

Now, why anyone would ever return for a fifth visit to these death hole islands, well, someone really has their work cut out for them to try to pull that one off. Good luck.