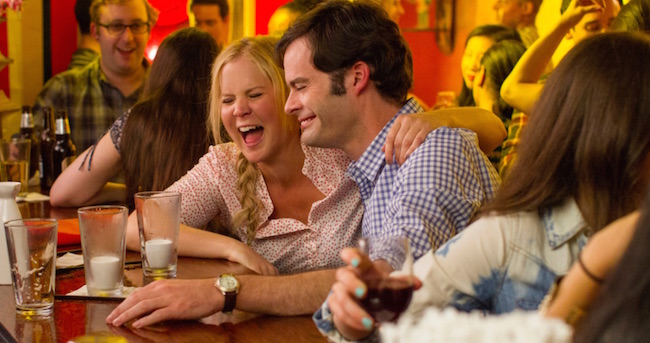 On the way home after seeing Trainwreck this past Tuesday night, I saw a subway poster for the film advertising it as, “From the guy who brought you Bridesmaids.” I found this peculiar when you consider that the director of Trainwreck, Judd Apatow, has directed and/or written eight films since 2005’s The 40-Year-Old Virgin, yet Bridesmaids isn’t one of those films. (Apatow produced Bridesmaids, which was directed by Paul Feig and written by Kristen Wiig and Annie Mumolo).

This got me to thinking about why Apatow – a name now synonymous with comedy films – didn’t have one of the film’s he’s actually directed used instead. Looking back at those four films, This Is 40 was interesting at times, but, granted, not a movie that jumps out at you as a “movie you love, so now see this one.” Funny People has been historically assigned to the “Well, it was nice to see Adam Sandler try” pile. Knocked Up has a very vocal chorus of detractors, accusing the film of being misogynistic (including, infamously, the film’s female lead). And The 40-Year-Old Virgin is now 10 years old and not really the same target audience as Trainwreck.

From a marketing standpoint, Bridesmaids makes a lot of sense – a movie liked by nearly everyone – but it feels a little disingenuous. To be honest, the only movie that Apatow has directed that would work in this situation is Trainwreck. The line used should be, “From the guy who brought you Trainwreck.” (I would be a terrible marketing person.) But, it does work in the context that Trainwreck is Apatow’s best film.

Trainwreck is also the first film Apatow has directed that he didn’t write; those duties went to its star, Amy Schumer. The Schumer/Apatow team is truly a remarkable thing to behold, apexing at precisely the right moment. For Schumer, her imprint on the world of popular culture seems to increase every day, to the point it might need to start being judged on a Richter Scale-type, jumps in magnitudes of 10 classification. Apatow, again, has his own empire, but really doesn’t have his signature movie. Trainwreck will now be both Apatow and Schumer’s signature movie.

Schumer plays Amy, a woman who we see had instilled at an early age the dangers of monogamy by her father (Colin Quinn). (We literally see this in a flashback that starts the film.) A good portion of Trainwreck’s opening minutes are spent with Amy as she drinks a lot and has a lot of sex. (I was going to use the word “dates” at first, but most of these encounters really aren’t dates. The whole point of this part of her story is that she enjoys booze and sex and has a hilarious disdain for most of the men she encounters. Her disdain for John Cena’s Steven creates some of the funniest moments in the film.)

On assignment for the magazine she works for, she meets nice guy Dr. Aaron Conners (Bill Hader), a surgeon who specializes in professional sports injuries. One of his patients is LeBron James, who has a fairly significant role in Trainwreck, playing LeBron James. (James will get a lot of deserved attention for this, but fellow NBA star Amar’e Stoudemire just might be his acting equal.) Amy boozes up Conners, sleeps with him, but then, later, starts to realize that she might actually like him.

I can’t think of anyone who could have played this role as well as Schumer. Being crass and likable at the same time is hard enough, but there’s a scene in which Schumer delivers a heartfelt speech that left me tearing up. I had assumed that Schumer would make me laugh during the events of Trainwreck, but I didn’t think I would literally cry. We all know Schumer is funny, but she is a legitimate actor.

I do fear that lost in all the (deserved) Schumer love that not enough people will talk about Bill Hader. Other than in the little seen Sundance favorite The Skeleton Twins, Hader has been mostly relegated to the role of “friend” or “buddy.” Here, Hader is legitimately the co-star of this film and plays off of Schumer perfectly. His Aaron Conners is sweet, funny, smart, and he and Schumer feel like a real couple. Additionally, there are so many people in this movie it’s about impossible to mention them all. But it’s time Mike Birbiglia got another starring role. Here, he plays Amy’s brother-in-law and has mastered the “goofy husband/dad face.”

Trainwreck will make a lot of people famous – and make Schumer a lot more famous — and it cements Apatow’s claim on the comedy world. It will now be the first movie that everyone thinks of when his best work is discussed. It’s funny, it’s heartfelt, it can be sad, it works as a story, the acting is great… it’s all the best parts of Apatow’s arsenal, only, finally, all put together in a single film. I’m positive we will see the words, “From the guy who brought you Trainwreck” on a poster in the near future.