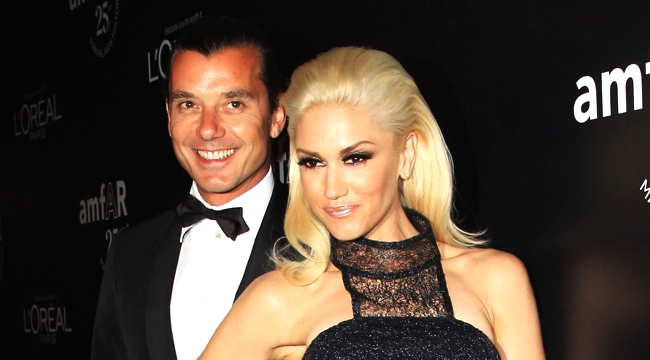 Love is dead, 1990s style. The 13-year marriage (and 23-year relationship) of No Doubt’s Gwen Stefani and Bush’s Gavin Rossdale is officially over. This news seemingly comes out of nowhere and years after the latest reports of marital discord. The two hit a bumpy patch years ago after Gavin’s secret lovechild, Daisy Lowe, made her presence known. Gwen and Gavin weathered that storm, but it couldn’t last forever.

TMZ reports that these two sparring lovebirds just couldn’t make it work. Gwen’s divorce petition cites the standard “irreconcilable differences.” Together, the couple brought three sons (Kingston, 9; Zuma, 6; and Apollo, 1) into the world. They’re both lawyered up and asking for joint custody. The battle for money could get messy, however:

Sources tell TMZ there is no prenup, so the 50/50 California community property laws kick in. 45-year-old Gwen is worth a reported $80 million, and 49-year-old Gavin’s worth an estimated $35 million. Given the length of the marriage, that will probably all go into one pot before it’s divided. Gwen checked the box on the form to deny Gavin spousal support.

In a joint statement they said, “While the two of us have come to the mutual decision that we will no longer be partners in marriage, we remain partners in parenthood and are committed to jointly raising our three sons in a happy and healthy environment.”

Neither Gwen nor Gavin will end up broke after this split, but it’s interesting that Gwen checked the box to deny spousal support. Gavin’s not hurting for money, as his previous rock-god earnings still exist. Still, this is sad news. If two 1990s pop icons can’t make it, we are all doomed!